Staff at the California College of the Arts (CCA) went on a four-day strike this week after negotiating for a first contract with the college for over two years. College staff voted to unionize with SEIU Local 1021 in April of 2019, and began contract negotiations that October. Their unit is made up of approximately 120 staff members, according to union representative Jennie Smith-Camejo, and includes studio managers, librarians, enrollment counselors, student advisors and all college staff who are not senior management or administration. Faculty have canceled classes and students and teachers have joined staff on the picket lines. Staff voted by 97% to authorize the strike and have nearly 20K in strike funds, all of it raised online since February 2. Strike activities at the arts college include painting, stitching and screen printing protest signs; organizing flash mob dance parties; and building community sculptures. Adjunct faculty, who are also unionized in Local 1021, and have been struggling to negotiate a second contract with the college since their first contract expired in 2020, have canceled classes and are striking in solidarity with staff.

According to Jennie Smith-Camejo, the catalyst for the strike, after years of negotiation, was the unfair labor practice charges issued against the college by the National Labor Relations Board.  The NLRB ruling asks the college to increase the number and length of bargaining sessions and to bargain in good faith. The school is challenging the NLRB decision and is appealing the charges in a hearing before a judge. Smith-Camejo told Observer that the decision to strike also occurred after the CCA administration waited until January 24, over two years into bargaining, to make their first counter proposal on salaries.

The union has stated that the strike could have been avoided had the school bargained in good faith with the staff and taken their priorities seriously. On Monday, 99 tenured and tenure track faculty members at the college issued a joint letter urging college administration to bargain a fair contract for staff that includes a living wage and job security. Piper Alldredge, CCA studio manager and member of the bargaining team for a staff union contract, cited increased job security at the college as a substantial demand in contract bargaining. She told Observer that the coworkers she began working with at CCA, a mere four years ago, are all gone. Because of this constant changeover, employees are overstretched and aspects of some jobs get neglected. Studio equipment is unmaintained and there aren’t enough staff to support the students in using that equipment. This understaffing and lack of equipment maintenance occurs at a college where tuition is over 50K a year.

“Since we voted to unionize in April of 2019, more than half of the staff bargaining unit has turned over,” Alldredge told Observer. “If you think about that in terms of a student’s whole four to five years at college, that means that almost the entire staff is changing over and that has a huge impact on students’ experience at school.”

CCA stated to Observer that “At a time when we are making rapid progress in negotiations and have reached agreement on so many items, a strike benefits no one—not our staff, not our faculty, and certainly not our students.” For staff members like Alldredge, however, the strike isn’t hurting the students, but helping them, by bargaining to have the employees who support them remain in their jobs long-term.

Part of this low retention is due to wages. According to a statement from the union, many employees make less than 40K, and two thirds of employees are low income, according to cost of living measures for the Bay Area. The union has stated that the school can afford to pay their staff members more, and their proposed raises for the unionized workforce would cost CCA less than 1% of its $108 million budget.

According to Piper Alldredge, in contract negotiations, staff look to the experiences of the adjuncts, who spent over three years bargaining for their first contract. This contract included a clause that allows the school to cut faculty pay in half if their classes are under-enrolled, an (unfortunately) common practice in higher education. At CCA, however, the enrollment threshold became a moving target, and faculty who lost a single student from their classes lost half of their pay. The union has stated that CCA is trying to place a similarly exploitative “Management Rights” clause into the staff contract. Alldredge told Observer that the staff want to ensure that no such similar clause gets added to their own first contract.

Throughout this week’s strike, while students come and go freely from campus facilities and their studios, regular college activities have been shut down, with students enthusiastically joining in the picket line. Art suffuses these pickets, with students hand making embroidered banners and screen printed signs. Faculty assist the students in art builds, providing collage materials and markers. Teachers are using the event as an opportunity for education, with an open discussion on garment worker labor history given by a professor of fashion and textiles.

The enthusiasm seen on the picket lines at CCA campuses is not unique to students at a private coastal arts college. That same energy has lit up institutions of higher education across class and geographic boundaries the nation over. The plight of workers in academia is seen increasingly in the same light as the plight of exploited at-will laborers across industries. San Francisco District Supervisor Matt Haney, speaking at a rally at CCA on Monday, stated “When we have people in our city educating our young people and you are paying them poverty wages, that affects all of us. That is unacceptable.” 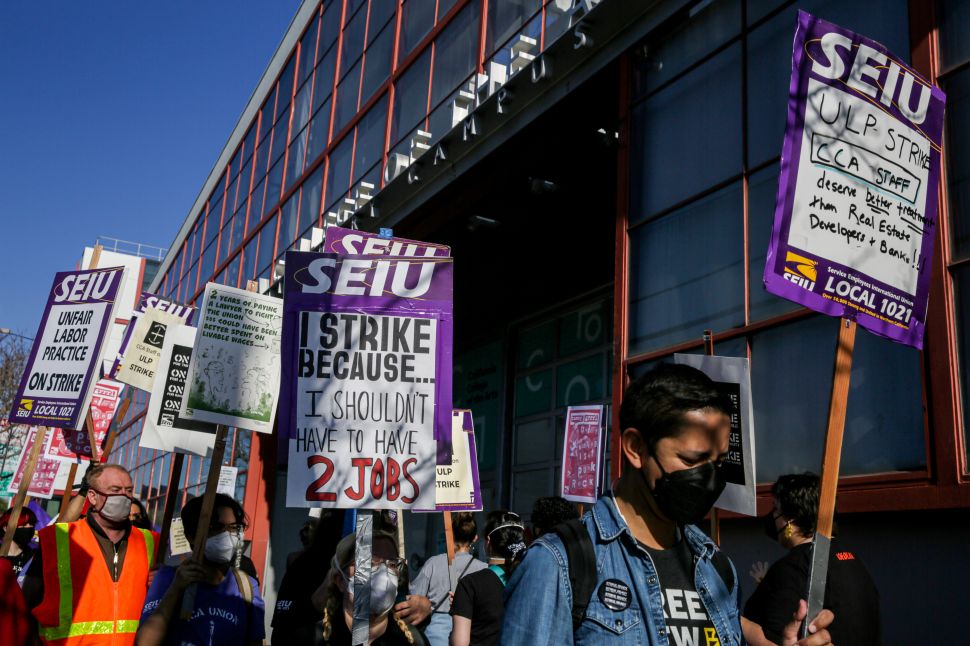