I didn’t grow up in the frenzy and fascination of New York, but it seems written in stone that I didn’t really start to live until after I got there.  It was the winter of 1960 and from the dirt and the noise to the glamor and the grit, everything held an endless allure as my career grew wings and so did my identity.  As anyone who knew and loved the city in those days will tell you with a look of sad resignation in their eyes and the sound of fond, undying memories in their voices, the changes have gone the way of the elevated subway and the nickel phone call, taking a heavy toll on a city that once drew us to its infinite possibilities like bears to honey.  One of the things I miss the most among its treasures is the habitual chain of delicious, inexpensive Horn and Hardart restaurants known to all and sundry as, simply, the Automat.

To celebrate the universal popularity of this long gone but still sorely-missed culinary phenomenon, a charming, informative and nostalgic documentary produced and directed by  and colorfully written by Michael Levine called, simply, The Automat, has the same kind of appeal as the fading aroma of a lost lover’s perfume in the lining of an old raincoat. The Automat is gone now, like Lindy’s, Childs, Rumpelmayer’s, the chicken sandwiches on cheese toast at Schraffts, and the Harvey Girls who brightened railroad station cafes from coast to coast, but it is far from forgotten.  It was more than a staple of New York history.  It was unique.  As Mel Brooks says at the beginning of the film, it had “little glass windows framed in brass with knobs, and if you put two nickels into slots next to the windows, they would open up and you could take out a piece of lemon meringue pie for ten cents.”  The Automat was a tourist attraction on a par with the Statue of Liberty and this warm, witty film tells you how it began, how it grew, and how it became an institution, a way of living, and a big chunk of New York history.

I knew it well, because when I was a critic and columnist three times a week in the New York Daily News for 13 years, the last Automat in existence was on the ground floor of the Daily News building on Third Avenue and 42nd St., and I would eat there every time I went to the office, entering through the same doors where I filmed a cameo with Christopher Reeve and Margot Kidder in Superman.  Joseph Horn and Frank Hardart invented the idea and opened the first Automat in Philadelphia in 1902 but it didn’t really catch on until it became a social and cultural icon in the workforce.  By 1920, there were 300,000 stenographers, secretaries, and sales clerks filling new office buildings throughout Manhattan, and the Automat provided them with  an inexpensive place to meet friends, eat fresh, wholesome and well-prepared meals in safe and comfortable surroundings, and where they never had to worry about tipping.  Beautifully designed with dolphin heads for coffee spouts, marble floors, high ceilings and pristine menus, in record time one Automat grew to 24, serving 2400 pies a day from a central bakery that famously turned out cheap, quality food in abundance.  Quality was a hallmark.  Rules were “Do not compromise”.  During the Depression, when so many restaurants went belly up, the Automat thrived.  In World War II, they supplied the food for combat ships.  And by 1953, they were serving 2,206,000 beef pies, 10,652,000 desserts, 3,388,000 hamburgers and 4,886,000 pounds of spaghetti to 8,000,000 customers per day. One of their most enthusiastic customers was Ruth Bader Ginsburg, who shows us the table where she hid her homework and relished the cream of spinach, praising the Automat for welcoming people of all colors, religions and manner of dress—a perfect example of America as a “melting pot with food for all, and yet we were all in it together.”  Secretary of State Colin Powell favored the macaroni and cheese.

Regretfully, by the time I arrived on the scene, the Automat was beginning to feel the competition, losing more on every cup of coffee, and was forced to raise its prices to a dime.  The result was disastrous.  The new coin slots wouldn’t accept dimes, and the ladies who lunch returned home to raise families.  Frozen foods took over, the clientele was younger, demographics shifted to the suburbs and office workers stopped eating out.  Big-city neighborhoods declined, homeless people took up the tables and chairs at the Automat, sometimes spending the entire day turning a cup of hot with ketchup into bogus tomato soup and filling their pockets with free crackers.  Other fast-food joints cashed in on the Automat’s ideas, and one by one, the quality diminished, replaced by Starbucks and McDonald’s and Burger Kings, and the inexpensive quality ham sandwich went the way of public phone booths.  The last Automat closed in 1991, and now it’s all just a fond memory of New York in a better time.

This enjoyable movie gets to the core of the Automat’s significance, cutting to the core of its social impact on New York and the changing world we live in.  Mel Brooks sums it up best: “It had some style and it was different.  The marble, the brass, the polished floors, the chatter, the coffee…that was the Automat. It can’t work again because the logistics and economics of today won’t allow anything that simple, naive, elegant and beautiful to flourish again.”  From nuns and socialites and Audrey Hepburn dropping her nickel in the slot while rubbing elbows with Black teenagers from the Bronx, the myriad images in The Automat remind me of a series of beautiful Edward Hopper paintings.  The Automat was owned by the people, and it’s the people who loved it, remember it with passion, and still shed a tear when you mention it now. 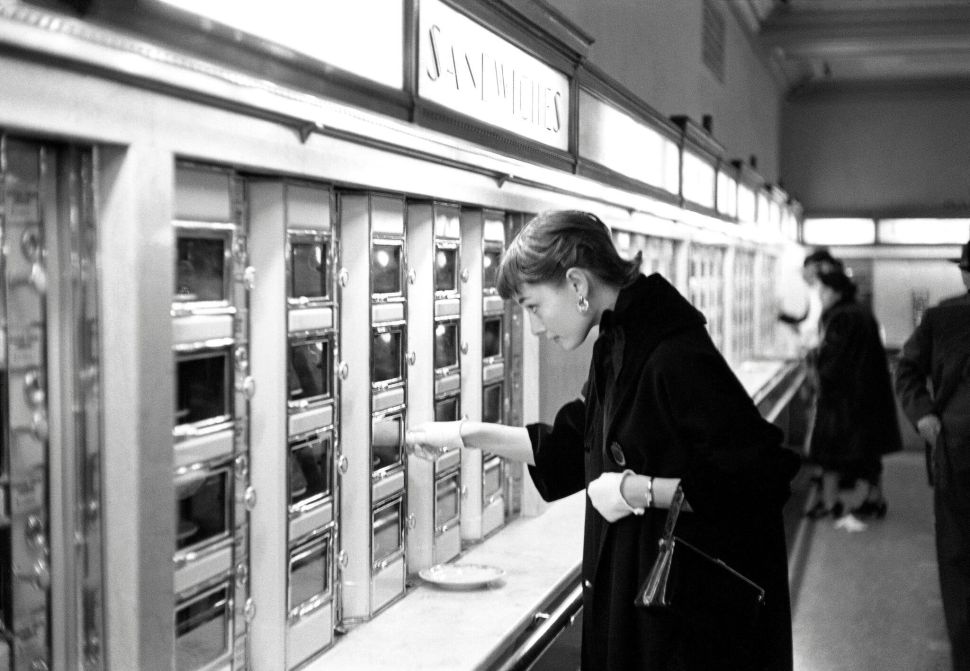