Not only has cinema made a post-pandemic comeback at its old stand, the movie theater, it is starting to spread to the cabaret circuit as well. Here are three current cases-in-point:

The title of Errico’s album, and evening, is a homage to her favorite film noir, 1947’s Out of the Past. “It’s a great movie with Robert Mitchum, Jane Greer and Kirk Douglas,” she says. “They’re both in love with her, and she’s a wicked woman.” It ends badly. Not for nothing is it a noir.

“That is the whole sensibility of the record, and I had many, many mad scientists who helped me pull together this list. I worked with Michael Feinstein, Jeremy Sams, Adam Gopnik—lots of great musical intellectuals who helped me choose the songs.”

The idea for this collection came to her during the past two years of enforced inactivity. “All through the height of the pandemic, when the world was locked away in lonely rooms, the world was watching movies. I returned to one of my obsessions—film noir. That genre felt mysteriously current. It’s really the art of being isolated and alone, of longing and maybe mistrust and feeling the world is corrupt. This aesthetic came out of the Second World War. I thought, ‘Isn’t it amazing to have World War II end and have this kind of dark art get made?’”

In addition to established noirs, Errico commissioned a few songs—”sort of neo-noir,” she calls it. Dory Langdon Previn added lyrics to David Raksin’s haunting The Bad and the Beautiful. “Marlowe’s Theme,” which David Shire wrote for 1976’s Farewell, My Lovely (Mitchum again, as Raymond Chandler’s Philip Marlowe), gets words from Gopnik. The latter collaborated with the late Peter Foley on a modern theatrical noir song written last year, “On Vit, On Aime.”

Michel Legrand, who put Errico on Broadway in Amour, also makes a posthumous contribution via a theme he wrote for Jacques Demy’s 1970 Peau d’Ane (Donkey Skin). Thanks to English lyrics from Sams, the song—“Amour, Amour”—rates a world premiere. “It’s a very hypnotic, swirling, difficult song,” Errico says. “Very similar to Legrand’s ‘Windmills of Your Mind.’”

The CD concludes with a Feinstein suggestion: Lionel Newman and Dorcas Cochran’s “Again,” delivered huskily by Ida Lupino in 1948’s Roadhouse. (Critiqued co-star Celeste Holm about Lupino’s singing: “She does more without a voice than anybody I’ve ever heard”).

“It’s a wonderful song, and I use it thematically,” Errico says. “It’s a turn down a more affirmative ending, as if my album had a kind of shape—from flirtatious mystery to real despair to the light of hope. I feel that ‘Again’ is a song with a glimmer, a flicker, of hope.”

Then there’s Kittredge, who’ll never admit she’s a movie buff. “That’s dangerous to say because then you’ll trap me, but I was the kid who was always watching movies,” she admits. “And I watched them over and over. All I knew for many, many years was movies, because I was from a small New England town so the idea of live theater wasn’t really present.”

Her Movie Nite sprints through 20 or so songs, starting with Judy Garland’s “Dear Mr. Gable: You Made Me Love You,” meshed with Sunny Side Up’s “If I had a Talking Picture of You,” and winding down with Disney’s 82-year-old signature song, “When You Wish Upon a Star.”

“I’m sure some of my selections will surprise people,” Kittredge allows. “It’s not The Greatest Hits of Movies, but they are all very meaningful to me.” Among the unexpected: “10,432 Sheep,” which Doris Day did in 1950’s The West Point Story and Frank Loesser’s “They’re Either Too Young or Too Old,” to which Bette Davis was jitterbugged to death by a jitterbug champ.

The inevitable inclusion—“As Time Goes By”—is correctly credited to Herman Hupfeld and a 1931 Broadway show, Everybody’s Welcome, rather than to 1943’s Casablanca. That film’s composer, Max Steiner, was incensed about the inclusion of Hupfeld’s song and did his best to get it dropped from the movie so he could write his own song. Currently, the opening bars of “As Time Goes By” accompanies the logo of every Warner Bros. movie that goes into release. (Sorry, Max.)

“I wanted to do something from La La Land, and ‘Another Day of Sun’ is what hit me,” KIttredge says. “It’s done brilliantly in the movie. When my music director, Alex Rybeck, and I read the lyrics, we went, ‘Oh, my gosh! I don’t think anyone knows what this song is about from listening to it in the movie, because the movie is so cinematically exciting. It’s so much less about the lyrics, so we stripped it down. In reality, that one song is a movie all by itself.”

Rybeck was also helpful in changing up Jeanette MacDonald and Nelson Eddy’s “Ah, Sweet Mystery of Life.” He created a folk-opera arrangement, and Kittredge does it with a guitar.

Barry Kleinbort has been around tweaking, adding directorial touches. “He has a wonderful eye. He’s been finessing the patter from one song to the next, which is really exciting and really cool. I didn’t know it was possible, but he’s making it even more intimate, which I really love.”

Rybeck is the musical director for Talman’s show as well, and Lina Koutrakos is as the director. The three of them put their heads together and came up with a program for The Shadow of Her Smile. The title echoes Johnny Mandel and Paul Francis Webster’s Oscar-winning song from The Sandpiper, which begins and ends the act, as well it should since the film stars Elizabeth Taylor.

“One time when I was on the subway, racing to my final callback for The Pirates of Penzance, I noticed everybody was starting to stare at me. I didn’t know what was going on. Then, this little old lady waved me over and said, ‘Don’t you know why we’re looking at you? You look just like Elizabeth Taylor in National Velvet,’ and I said, ‘Oh, was that on again last night?’”

A circuitous bit of luck went into this casting. Talman spent the summer of 1980 as a cabaret intern at the Williamstown Theater Festival and wound up doing duet scenes with Austin Pendleton. In the fall, she continued to study with him at HB Studios. When he got the job of directing The Little Foxes, he invited her to audition. Hellman had final casting approval, and Talman went to her apartment on Park Avenue and read for her twice. She didn’t meet Taylor until the first read-through. The star came up to the novice, gave her a hug, kissed her cheek and whispered in her ear, ‘Oh, my God! I feel like I’m looking at myself in National Velvet.’”

On Feb. 27, Talman plans to be in Kittredge’s audience, cheering her on, but she would much rather have been at 54 Below, doing her tribute to Taylor since that day happens to be the star’s 90th birthday.  Instead, she will be on The Richard Skipper Show celebrating it there.

“We tried so hard to get that date at 54 Below, but it was already booked. I’m hoping, from now on, that I will be able to do The Shadow of Her Smile there every year on her birthday.” 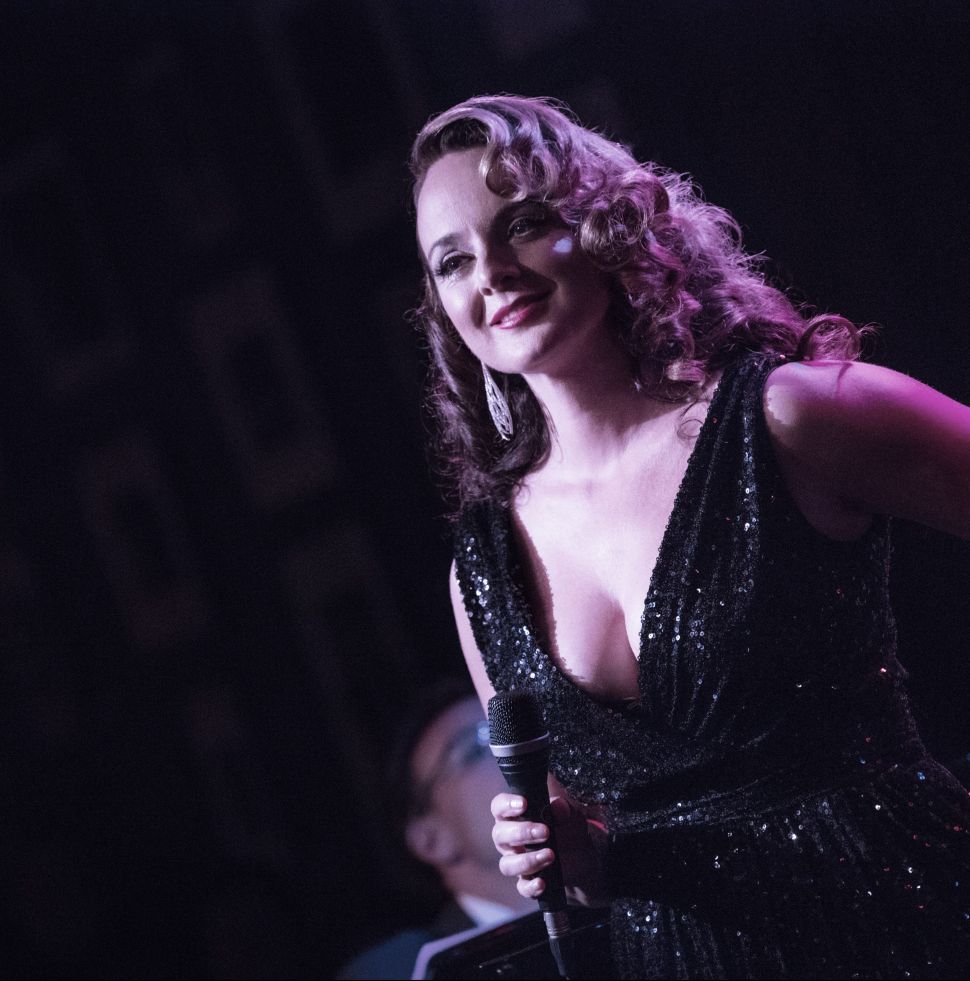