After a two-year nap, the New York theater awoke to the sound of 76 trombones this week, just in time to jam the mobs into the Winter Garden Theatre and welcome Hugh Jackman back to Broadway.  Yes, it’s a great occasion—the star-spangled return of Meredith Willson’s legendary musical The Music Man—and the screaming ovations every night drown out the sound of traffic all the way to Times Square.

There is nothing Hugh Jackman can’t do onstage—and in The Music Man he pretty much does it all—frontwards, backwards, and upside down. He’s made his fortune in so many stupid Wolverine movies I’m surprised people with taste, intelligence and knowledge remember what he’s capable of with a tube of greasepaint and a follow spot.  Movies make money to fill the bank account, but Broadway makes magic to feed the soul.  This is one movie star who knows the difference.  A lot of seasoned pros shine like polished new pennies in The Music Man ( it’s one of the biggest musical casts New York has applauded in years) but this boy from Oz is a sexy, funny, heart-stopping, toe-tapping, foot-stomping one-man extravaganza who proves it, and sends his audience over the moon, screaming for more.

Sooner or later, he had to get around to Prof. Harold Hill.  It’s a perfect role for Jackman.  He’s the charming con man who travels the Midwest in 1912, dropping into town long enough to rip off the men, seduce the ladies, and hop the next freight train before the sheriff arrives.  This time, he lands in River City, Iowa on the Fourth of July in the guise of a musical prodigy and professional conductor whose goal is to convince the local citizens their young people need to form their own colorful marching band, sell them musical instruments and expensive costumes, and promise to teach them how to play.  His secret?  He has no papers, no experience, he can’t play a single note, he doesn’t know a piano from a piccolo, and he’s got to wrap up his business and fleece and flee before he’s found by the cops who have already reached the city limits. But in River City, everything turns upside down. He takes the town by storm—and the audience, too.  He gets his money, charms the dowagers and even the mean-spirited mayor, and falls in love with Marian, the skeptical town librarian (Sutton Foster).  By the time the game is up, the whole town has fallen for him and all is forgiven in time for a happy grand finale with everyone marching across the stage to a standing ovation, Mr. Jackman conducting like John Philip Sousa, and ace director Jerry Zaks pulling it all together like Barnum, Bailey, and  all of the Ringling Brothers put together.

This is the kind of corn that never grows stale, and the book, music and lyrics (all by Meredith Willson) are as fresh and filling as they were when the show premiered in 1957 and have been in every incarnation since.  What’s different is the star himself.  He sails through the tongue-twisting pace of “Trouble” (“starts with T and that rhymes with P and that stands for pool”).  He jumps and leaps like a kangaroo on “76 Trombones” and “Shpoopi”.  He wears his neatly pressed period suits that  cling to him like the hands of hundreds of women (and men) who dream of such things.  He grinds his hips to the people in the front row and the high-price orchestra seats go berserk.  In Warren Carlyle’s Bob Fosse-inspired hip-hoppy choreography, he fills the stage with so much agile, non-stop movement and music you don’t know what to look at or listen to first.  It just hits you at the same time, like Independence Day fireworks. On both the original and the reprise of “76 Trombones” he gives new meaning to the phrase “shake your booty.”

Any caveats?  You bet.  As wonderful as he is, Mr. Jackman did not make me forget Robert Preston, who originated the role and played it to perfection for years, on stage and screen.  I also missed little Ronny Howard, who played the kid who lisped his way through the rousing “Gary, Indiana” and “Wells Fargo Wagon” numbers in the movie with so much aplomb (pint-sized Benjamin Pajak does just fine in the role, however).  Most of all, I missed the legendary Barbara Cook as Marian the Librarian.  Sutton Foster has a strong soprano and a lovely resigned quality, but she’s no Barbara Cook.  Still, there’s so much entertainment here that any reservation, no matter how small, seems regrettably churlish. I know of no contemporary performer who meets the standards of his electrifying talent.

Bring your own razzle to The Music Man.  Hugh Jackman provides the dazzle. 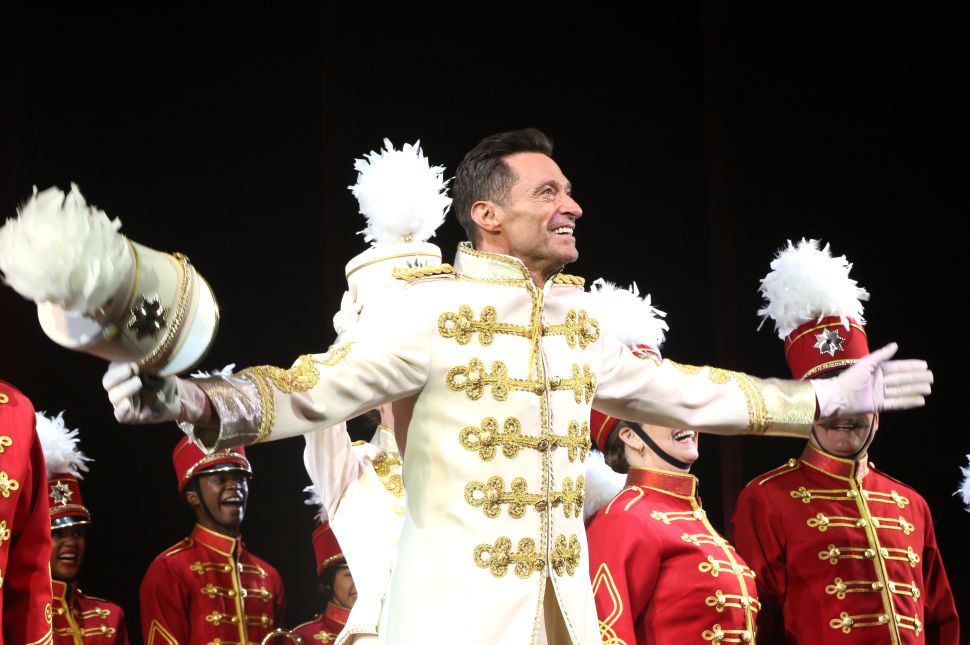