What brings the shows of emerging contemporary Western African artists at La Mama Galleria, albertz benda and Allouche galleries is the formulation of a Black-voiced social critique on family, friendship, belonging in the world and the chronicles of absurdity and injustice.

“I paint about inhabiting a black body,” said Ghana-born artist Richie Adomako (b.1984) to Observer. He stands in La Mama Galleria amid a survey of his works from the past four years, series, individual pieces and a large-format painting composed of collage, spray paint and other materials, curated by C. Finley. “This is what I’d like to do more of,” he added later, in front of the centerpiece.

Adomako’s paintings are at times neo-expressionist, faux-naïve and cubist, the latter in portrait experimentations when the artist captures the essence of a work in minimalist, simplistic forms, such as in the “Nosey face” series (2020-). He mixes scripture, figuration and abstraction to interrogate the complexity of language. In doing so, his works generate an explosion of senses and deep reflections on what constitutes wealth and desolation in today’s internet, smart-phone and bull-run-obsessed American society, in the way a diarist and disruptive watcher of consumerist appetites sketches crepuscular signs in an electric rush for this strange place could be a mirage after all.

I wish I knew her name yellow? (2015) And I wish I knew her name fuchsia? (2015) are placed side by side and show two different interpretations on the same motif, based on the collage of a woman wearing a hijab. In I wish I knew her name yellow? we feel a hue of tenderness permeating the scene, a deeply melancholic gaze turned towards a loss—family, place, time, we don’t know. Who is she? Adomako came across her face during 2015 in Brooklyn on a flyer of a non-profit organization. Her father had cut her nose off as the daughter reminded him of her mother whom he despised. In front of such violence, Adomako responded with I wish her name fuchsia? using spray paint as a medium to encapsulate outrage and horror.

Symbols of displacement and uprooting populate many of his artworks with the remanence of planes and boats, such as in The fisherman: beasts of burden (2015) or Fourty-fourty (2020), a complex fresco which shows a hanging vessel named “forever at sea” with a cross, a resting figure wrapped in an envelope and a large fish crowning it, suggesting exile and redemption. Lonely silhouettes stand on opposite sides of the painting, with one character having to choose between two directional signs, “home” and “promise.” An omniscient eye watches over. The words FLIGHT, POSSIBILITY, HOPE, BLACK stand out, along with numerous details which makes Fourty-fourty representative of Adomako’s playfulness in superimposing layers of significance. These works may appear chaotic yet Adomako constructs a minutely detailed cosmos which includes ladders, signs and bridges as an invitation to lean closer, decrypt, understand and empathize.

Adomako seems to linger on the poetic properties of faces which oscillate between a surface of immensity and as a defining enclosure. Geisha and Bull in the fields (2017) hints at the tension between duality and self-affirming identity, fusing and colliding worlds. Faces blend into each other and create an epistemic confusion. We find similar echoes in the artist’s self-portraits, a series created in 2022, which alternates between light and shadow, underscoring complexion and the many projections attached to them using pastel, graphite, ink and charcoal.

Over in Chelsea, albertz benda presents Famakan Magassa’s first US solo show titled “Soifs” which questions the plurality of thirst, desire and vitality. Magassa previously exhibited his works in Mali, Cameroon, Côte d’Ivoire and France. “Soifs” includes a body of works centering on anthropomorphic motifs that interrogate loneliness, addiction and friendship, inspired by the aesthetics and spiritual significance of traditional dancers from Magassa’s home country of Mali, Kôrêdugaw (or kourédougas), connected to spiritual and shamanistic initiations.

“Soifs” articulates the polymorphic nature of being thirsty—from the intimate to the more public and institutional. For instance, Soif de tendresse (2021) underlines tenderness, sorrow and comfort in an embrace between two characters whose silhouettes remind of a woman and a child. Soif de connaissance (2021) praises books as an object and gateway, the determined act of reading, intellectual curiosity and learning in a playful interaction between three figures and piles of books. Soif de pouvoir (2021) eerily resonates in depicting a character in a formal uniform sitting on a red velvet-like accent chair, feeding an apple core to a hungry figure which carries the former. Playing on power dynamics, abuse and authoritarian themes, Soif de pouvoir also addresses issues of inequality and corruption. On a similar vein, Soif de justice (2021) calls for fairness and accountability, a tenuous aspiration as two characters awkwardly seek balance on a symbolic scale of justice.

Magassa’s acrylic on canvas paintings introduce a theatrical world reminiscent of puppet shows, comic boards or the popular caricature of the Commedia dell’arte. They relate the everyday in social frescos, moral dilemmas and societal satire. In “Soifs”, artworks are designed as self-supported vignettes. Comedy saturates “Soifs” such as in the attentive inclusion of inclusion of a single shoe (sports shoes or stilettos), symbols of mobility, protection and freedom. “The shoes are also meant to be humorous, I like to make people laugh through my paintings. Laughter is a medicine in life. I’ve always loved [this saying] ‘Laugh, and make people laugh, because too serious is not very serious,’” Magassa (b.1997) told Observer.

Magassa excels in conveying non-verbal expression—lusty gazes, seducing pouts, punishing frowns. The diversity of his cast confirms that Magassa is foremost a keen witness of the family unit and we sense through the recurrence of feminine figures an appreciation if not an homage to the influential women in his life.

While tackling heavy subjects such as addiction, the artist also captures unquenchable emotions such as moments of bliss, ecstasy, joy and conviviality, wholesomeness conveyed in solid blue, pink, red backgrounds. As such, the visitor basks in an unknown-yet-familiar landscape of friends. Magassa underlines what brings people together across different cultures in the derisory nature of the human condition.

Nigerian visual artist Jimbo Lateef (b.1999) interlaces calligraphy and portraiture in digital-like creations that stare right back at the viewer. Just Another Other Day (2022) presents a confident young man with piercing eyes, the cool hues of his skin contrast with the warmth of a terracotta, salmon and tangerine-colored background. Stripped from any distracting details, we are magnetically drawn to this unknown man. Chin up, head high, he seems unafraid, unashamed, exuding a sense of calm poise and defiance.

Ghanaian contemporary artist Dankyi Mensah focuses on hyperrealist portraits celebrating Blackness. “As an artist, my hope is to convey a deep sense of optimism as we struggle for a dignified and meaningful existence in this universe,” Mensah said. Colorful backgrounds atmospherically frame each character, from the figure of the international French football player of mixed Guinean-Congolese ancestry in Paul Pogba (2022) to the business attire of violescent-dominated Amare (2022).

Oscar Quarshie Nelson, a fellow Ghanaian artist, explores textures and softness in his portraits which bind masculinity with gentleness. His nature-longing characters upscale the “plant daddy” trope. Nelson’s works seem to gravitate towards the sunflower, a symbol of quietude and peace. Me, Myself and I (2021) is a touching homage to tenderness and truth in representation. A young man, presumed to be the artist, sits on a chair, face resting against his fist. Behind him, a warm yellow background evokes eternal summer and vast solar expanses. In After Sunset (2021), a character holds a delicate sunflower, which echoes a willingness to confront perceived expressions of fragility and social norms, resonating with Jimbo Lateef’s man holding a single rose in Creation of Peace (2022).

In the diffused soot and acrylic paintings of Ivorian artist Bamouin Sinzé (b.1995), silhouettes blend with their background and are about to vanish. Sinzé channels ethereality and trouble, through vaporous, smoke-like technical effects that surround individual characters and concedes a feeling of entrapment and freedom at once. Sinzé’s process involves painting on an upside-down canvas, mostly at night time. His “Modja” series mixes soot with accents of red which convey a form of anguish and stress. Among such artworks, Caprice (2021) characteristically focuses on the gaze, elaborately precise while the rest of the portrait dissipates, as if bound to self-destruct.

In “Voilà l’Afrique,” self-taught artist Anthony Ayi Mensah (b.1986) incorporates elements of abstraction to re-interpret color and form and the function of portraiture. The artist’s “Yitso” series insist on an exaggerated and protruding blue eye. Facial expression across Yitso 39 (2021), Yitso 41 (2021) and Yitso 42 (2021) remain unchanged and this static quality interrogates on our anticipation of emotional range and representational roles portraits are commonly expected to convey.

“What should a face be? What counts as a face and why?” Namwali Serpell asked in Stranger Faces (2020). These artists are tackling nowness and existence as a necessity to affirm, to remain visible, to celebrate a present that gives as much as it often takes away. 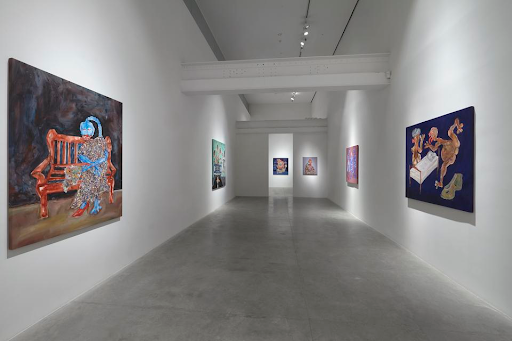