Exactly four years ago, a SpaceX Falcon Heavy rocket (a heavy-lift derivative of Falcon 9) launched a test mission with a special payload on board: a cherry-red 2008 Tesla Roadster owned by Elon Musk with a spacesuit-clad dummy named “Starman” in the driver’s seat.

Since then, the red Roadster has been wandering in a somewhat irregular orbit in the solar system, going around the Sun approximately every 557 days, according to WhereIsRoadster.com, an independent site tracking the car’s real-time location in space.

The Starman-Roadster duo completed its first orbit around the Sun in August 2019 and flew by Mars for the first time in October 2020, Observer previously reported. To date, the car has orbited the Sun 2.62 times.

SpaceX originally launched the Roaster onto a path toward Mars’ orbit and hoped it would eventually crash into the Red Planet, which actually got some planetary scientists to worry about potential bacterial contamination because of the car’s unsterile condition.

According to WhereIsRoadster, it is indeed heading toward Mars from about two million miles away. However, a calculation by the astrophysicist Hanno Rein, of the University of Toronto, has estimated that the Roadster would more likely crash into either Earth, Venus or the Sun—in about 10 million years.

His calculation has proven to be true so far. In November 2018, “Starman” passed the Mars orbit and drifted toward the solar system’s asteroid belt just as Rein predicted.

At its launch in 2018, Musk set dummy Starman to listen to endless loops of David Bowie’s Space Oddity in one ear and Life On Mars? in the other during the journey.

If the battery was still working, Starman would have listened to Space Oddity 397,224 and Is there Life On Mars? 535,242 times by now. 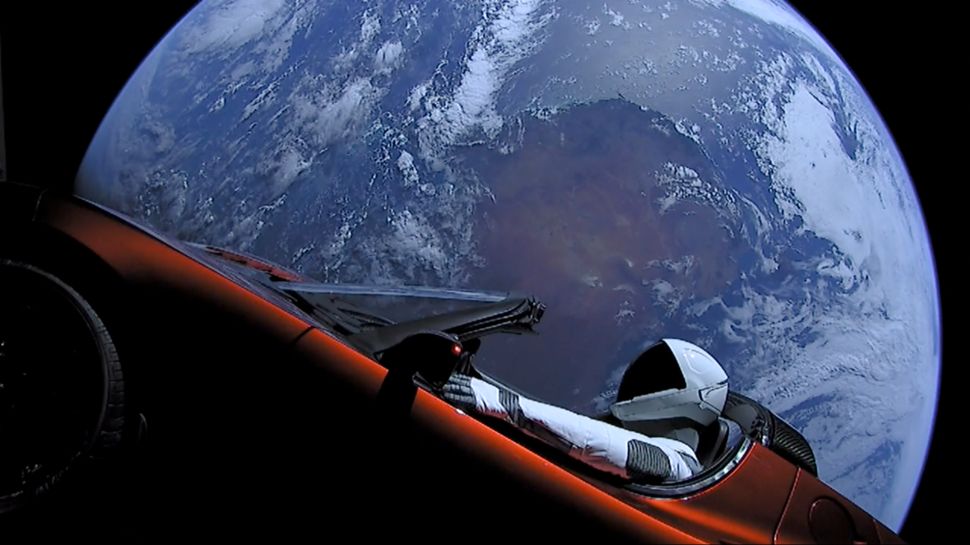