On Wednesday, Sotheby’s is offering a jewel in the global crown of art up for auction: René Magritte’s L’empire des lumières, one of the most accomplished visions the famed surrealist ever produced, will be offered as part of a larger 20th-century art auction. The deliciously mysterious canvas, which depicts a home shrouded in nighttime shadow beneath a clear blue sky, is expected to fetch over $60 million dollars and certainly has the potential to earn even more. The previous record for a Magritte was set by Sotheby’s in 2018 when they sold The Pleasure Principle for $26.8 million. Unlike the Pleasure Principle, though, L’empire des lumières has never been sold before.

It was created by the artist in 1961 after he was inspired by encountering then-16-year-old Anne-Marie Crowet Gillion, who became a lifelong friend of Magritte’s and a frequent subject for his portraits. The simplicity of L’empire des lumières is the key to its genius: gazing at it, you wonder whether this universe that blends night and day is our own, or the environment that holds an entirely different planet altogether. The weirdness of Magritte’s imagery even inspired one of the filmmakers behind the horror classic The Exorcist. In anticipation of tomorrow’s sale, which Sotheby’s also celebrated with a custom Magritte decal, the painting was exhibited at Sotheby’s in Los Angeles, New York, Hong Kong, and London.

“L’empire des lumières brings together the two most fundamental elements of daily life – those of day and night – onto one paradoxical canvas,” Helena Newman, the Sotheby’s Worldwide Head of Impressionist and Modern Art, said in a statement. “With its impressive scale, the cinematic painting draws the viewer into Magritte’s timeless world. Its immediacy and power encapsulate the ‘star quality’ that places Magritte firmly among the pantheon of the market’s most sought-after artists. We could not be more thrilled to start the new year by presenting this show-stopping work in London, where it represents a new benchmark both for the artist and the global art market.” 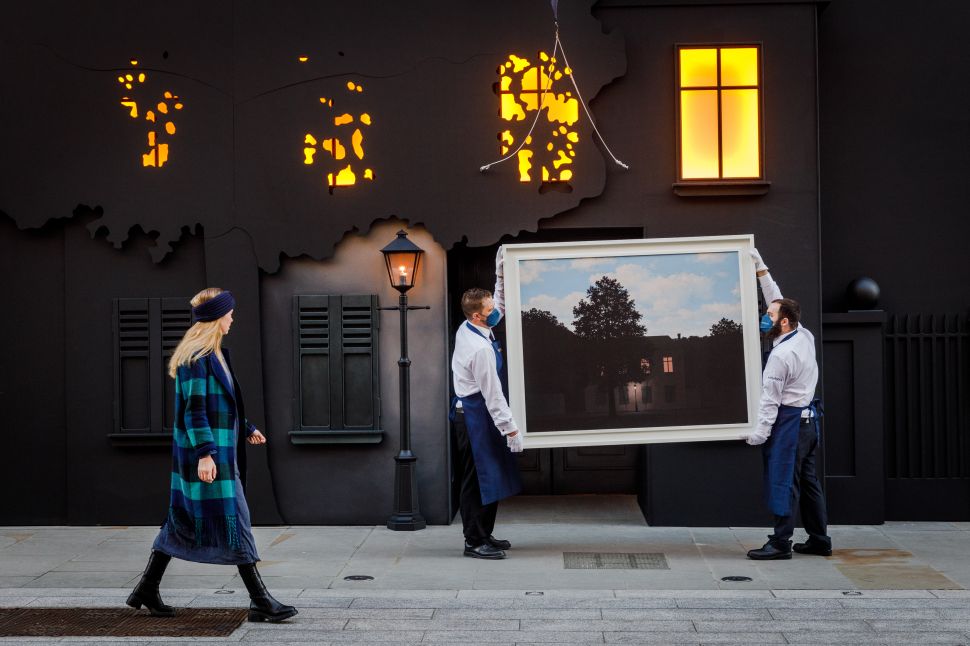