Saturday evening the Metropolitan Opera presented Tosca for the 991st time featuring Aleksandra Kurzak in her second-ever performance of the title role. A big, excited crowd was on hand to partake in the fiery theatrics of Puccini’s beloved melodrama which takes place in real Roman locations on a fateful day in June 1800. It may have been that many were back at the opera for the first time in a long while as they eagerly gave lusty entrance applause to all three of the principals—a first in my long Met experience!

Though the Polish soprano displayed many fine qualities, her small-scaled portrayal ultimately suggested she’s not an ideal match for Floria, the beleaguered prima donna. Kurzak’s big international break came in 2004 at age 27 when she debuted at the Met as the mechanical doll Olympia in Offenbach’s Les Contes d’Hoffmann. Her success in that coloratura role led to her return to the house several years later as Blonde in Mozart’s Die Entführung aus dem Serail, but a recurrent difficulty with that role’s exposed high Es suggested that her career path would lay in more lyric roles like Gilda and Gretel.

That transition coincided with her meeting superstar tenor Roberto Alagna in 2012 during a run of Donizetti’s L’Elisir d’Amore. They became a couple, had a daughter and eventually married in 2015. Since then, they’ve appeared together often; at the Met they performed Pagliacci and Carmen, operas in which she excelled in the lighter roles of Nedda and Micaëla. However, in Europe she’s taken on increasingly heavier repertoire like Verdi’s Elisabetta and Desdemona in Don Carlo and Otello, as well as Santuzza in Cavalleria Rusticana, a part often sung by dramatic mezzos.

Until last week’s Tosca, Kurzak hadn’t brought any of those new challenging roles to the United States; however, she did have a resounding success (without Alagna, it should be mentioned) with Violetta in La Traviata at the Met in January 2020. That triumph undoubtedly led to a heady anticipation for her Tosca. I understand the original plan was for Kurzak to initially take on Puccini’s potboiler in Europe but those performances were canceled due to the pandemic. So, likely with little stage rehearsal, she braved one of opera’s most iconic roles for the first time ever at the Met on March 2.

But Kurzak has not been the only soprano to debut her role in Sir David McVicar’s hyper-realistic production since it was first revealed on New Year’s Eve 2017. That premiere famously lost its entire starry cast and conductor–Kristine Opolais, Jonas Kaufmann, Bryn Terfel and Andris Nelsons—and eventually featured Sonya Yoncheva’s initial Tosca. Later that season Anna Netrebko too loved, murdered and jumped to her death for the first time, alongside her husband Yusif Eyvasov. But those two sopranos proved more successful at meeting Puccini’s demands than Kurzak.

While the middle of her voice has now acquired a plush richness beyond what one heard in her early days as a coloratura, Kurzak at 44 lacks the strong lower register required for many of Tosca’s outbursts particularly in the second act’s fraught confrontation with Scarpia. While she was utterly charming in her coquettish first-act interchanges with Mario (played by Alagna with whom she shared an endearing intimacy on stage), Kurzak failed to exude the necessary hauteur and gravitas to become the diva all Rome admired and desired.

Unlike the duets with her husband’s Cavaradossi, Kurzak was terribly overmatched encountering Željko Lučić’s domineering Scarpia. The Serbian baritone’s approach alternated between seductive and brutal, and for at least one shocking moment Kurzak’s rather weak-willed Tosca seemed tempted by his entreaties. Her prayer “Vissi d’arte” was less than the usual showstopper as she and Yannick Nézet-Séguin’s orchestra were rarely in sync and its concluding high notes veered sharp. The subsequent squeaky screams for help inspired no pity or terror. 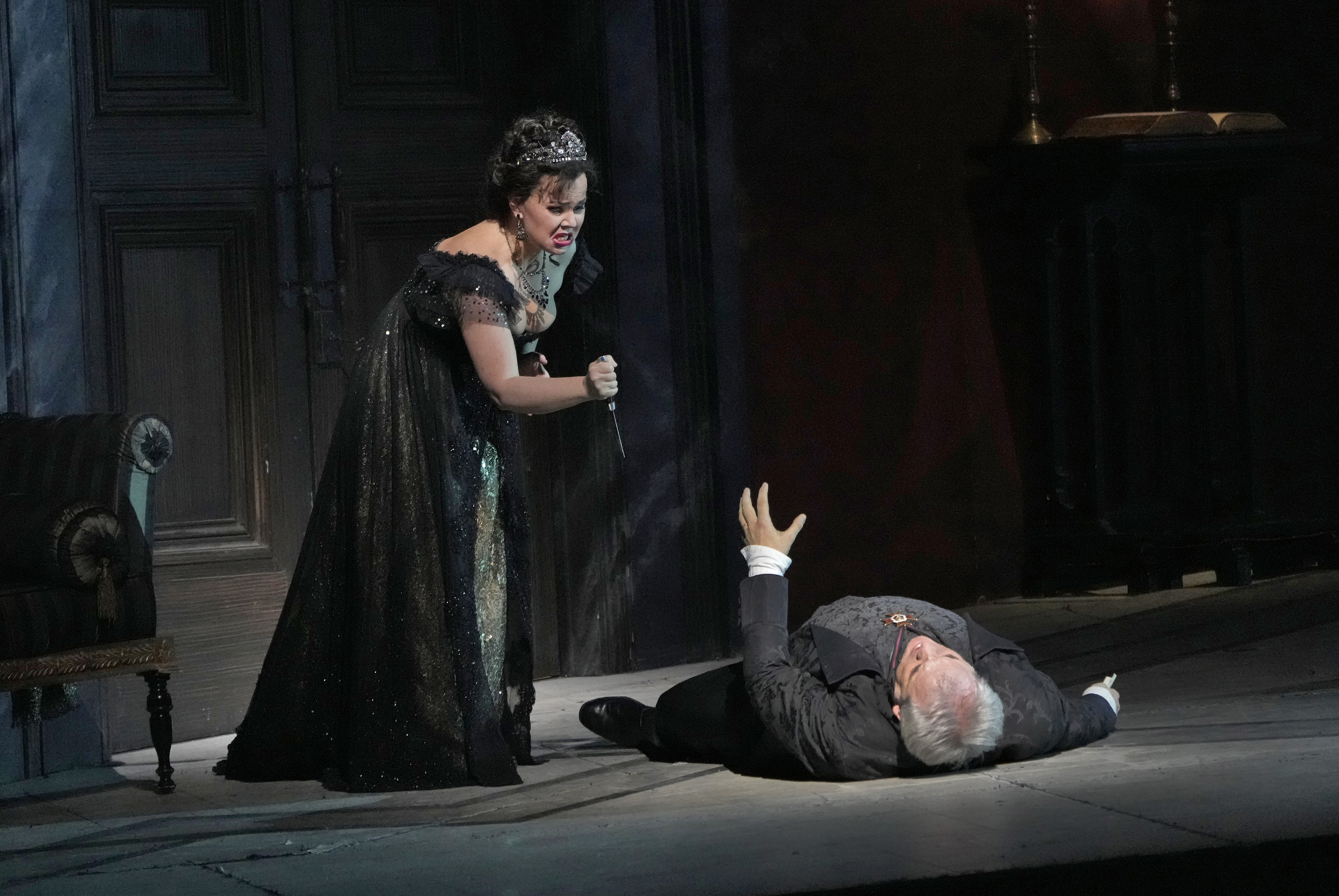 Though the soprano clearly demonstrated that she’d thought long and hard about her role, ultimately Kurzak emerged as miscast and overparted. Her acting revealed many felicitous details, perhaps worked out on her own or in concert with revival director Shawna Lucey. Her frightened execution of the business with the candles and crucifix on Scarpia’s body was unusually convincing, but her early grabbing of the knife made the murder alarmingly premeditated and reduced considerably our sympathy for Tosca’s predicament.

Returning to Tosca at the Met for the first time in nearly a decade, Alagna began the evening well with an ardent “Recondita armonia.” Unfortunately, he rarely sang at less than fortissimo all evening including the most unpoetic, applause-begging “E lucevan le stelle” imaginable. In the remainder of the third act, however, he enacted an unusually fatalistic Mario, one who was not convinced by Tosca’s hopeful escape plan and instead was sure he would soon die.

Lučić, a veteran of the production’s premiere, repeated his unusually effective villain. While some Scarpias are all snarl and bite, he went silken and smooth when needed. After years of creaky-voiced buffo basses in the role, Patrick Carfizzi’s hearty, well-sung Sacristan remains a delight. As Angelotti, Lucia Lucas made a noteworthy debut in the previous performance as the first openly transgender singer to perform at the Met. Ariadne Chan-Miller sang the offstage Shepherd Boy.

Though the slow tempi of his lushly expansive view of the score was occasionally disregarded by his Tosca and Cavaradossi, the busy Nézet-Séguin drew magnificent playing from his orchestra which has been on superlative form lately in both Don Carlos and Ariadne auf Naxos.

After two more performances this month, Kurzak returns to the Met in October for nine more Toscas, mostly with Michael Fabiano as her Cavaradossi. Although she may grow into the role with repetition, I doubt that she and Floria Tosca will ever be the right match. In a provocative turn of events, Angela Gheorghiu, Alagna’s second wife, will also be Tosca next season at the Met, a role she last undertook there to great acclaim in 2015. 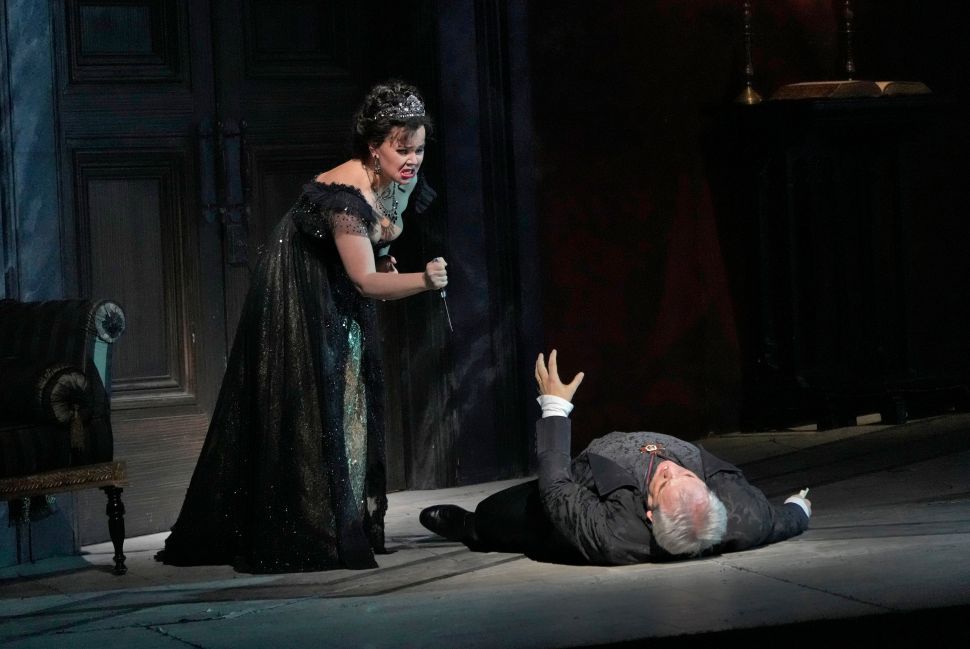