The granddaughters and great-granddaughters of the banshee bobbysoxers who stormed the Paramount in the ‘40s and screamed themselves silly over Frank Sinatra were out in full force at the 92nd Street Y when Reel Pieces—the Y series moderated by Annette Insdorf, Professor of Film at Columbia University’s School of the Arts—returned after a pandemic pause of two years.

The object of their bombastic affection was the subject of Insdorf’s classy, cerebral grilling: a 38-year-old L.A.-born, London-raised actor named Andrew Garfield, who’s enjoying a phenomenal following now—and not just because of his surprise appearance in Spider-Man: No Way Home alongside Peter Parkers past (Tobey Maguire) and present (Tom Holland). That film has made close to $2 billion worldwide since Christmas and is sixth among the all-time top-ten box-office champs.

Garfield’s fans may have come to swoon, but they stayed for some deep-dish food-for-thought about isolation and death, smartly maneuvered by Insdorf. Out of an abundance of caution, she conducted her quizzing from behind the obligatory black mask, pointing out that her subject was up for Oscar honors (and 50 other film awards this year) for his portrayal of composer Jonathan Larson, who died in 1996 the night before his landmark musical Rent had its first preview at New York Theater Workshop. Lin-Manuel Miranda, who lived through two landmark musicals (In the Heights and Hamilton), turned film director to tell Larson’s compelling story in tick, tick . . . BOOM!

Unlike Sinatra, Garfield only now is taking a sharp right turn into musicals. “I had a year to learn how to sing and play the piano and dance and do the choreography,” he admitted to Insdorf. “It was a great year because it was all in service of this character, this amazing person who left us far too soon.”

He suggested the audience Google Larson and check him out on YouTube. “He sings and plays like he’s trying to reach the back row of the galaxy. He doesn’t really care about how he sounds. He’s just more concerned actually about being heard. It was his protests, a revolutionary call to action, his musicals, his music. He wasn’t a warrior, but he was an artist. He was a warrior in art.

“He was always turned up to eleven. There was no off-switch, let alone a ten- or a nine-setting because it was urgent, because I think somewhere deep down he knew unconsciously that he didn’t have a lot of time here. There was a line in the original tick, tick . . . Boom! that they had to cut after he died at 35. It was ‘Sometimes, I feel like my heart is going to explode’ so he knew. I think there’s some weird, unconscious thing that he had—an access he had to himself—where he knew that he had to get as much of his song out into the world and to sing it as loudly and as brilliantly as possible, because he had a very, very limited amount of time to do so.

“As we explore in the film, when he went to write Rent, it was really about saving the lives of his friends who were all getting sick and, in a lot of cases, dying during the AIDS epidemic so his music, his art, was more primal. It wasn’t about sounding pretty. It was about his friends and fighting for the dignity of the human soul, because the Reagan administration didn’t mention the word AIDS in public for the first four years of the epidemic. He was, like any good human being, outraged and disgusted by the indignity he saw being enacted upon the people in his community.

“You know what I find really moving? He was an artist who was never recognized in his time, yet every morning he got up, bashed at the piano and wrote his song. In the face of rejection and failure, in the face of poverty and destitution, he still got up every morning in the hope he’d leave the world a richer place. Maybe people wouldn’t get it now, but maybe down the line they would. That’s why people respond to the film. In fact, that’s why I respond to John. It’s just so inspiring.”

Insdorf wondered if playing Jonathan Larson made Garfield more aware of the ticking clock of our own life. “Oh, definitely,” he responded. “John’s life does feel like a symbol of remembering and how do we stay in contact with remembering the thing we always try to forget, which is: we are going to die. We are all going to die. I know it’s not fun to think about if you’re not used to thinking about it, but I promise you—the more you get used to thinking about it, the more fun it is to think about it, because each day becomes incredibly precious and meaningful. That only happens when we remember the thing we know we try to avoid knowing—that life is short and sacred and we’d better be here as much as possible with each other. The time between ‘Action!’ and ‘Cut!’ for Jonathan was such a short time—35 years—and look what he did. He was haunted by that. He knew. We all know, so I think it’s good for us to acknowledge what our own ticking is.”

Much was lost during the past two years, especially for actors who were deemed—Garfield couldn’t find the word until it was supplied by a helpful member of the audience: non-essential. “That was very hard for actors to contend with because they don’t like being non-essential,” he kidded-on-the-square. “My brother, who’s a doctor and will always be essential and was very essential during this period. He would go home every night and watch Netflix shows. Seriously. He needed it. He needed to be taken out of his reality and think about things in a bigger way.”

Shooting on tick, tick . . . BOOM! began March 3, 2020, shut down two weeks later, then resumed Oct. 6. It was a break Garfield sorely needed, having lost his mother right before filming started.

“There are so many graces in that time with that awful loss, one of which was I got to be with her. I held her hand, looked her in the face, and we got to leave nothing unsaid. There was real beauty, and I started to put that into tick, tick . . . BOOM! I had three or four months in New York on my own in a strange apartment in the East Village—just me and my grief. I was so grateful for that time because it meant that I got to travel deeper into that universal experience that hopefully we all get to have. It would have been much worse had she lost me rather than me losing her. It is less common, but it happens. I’ve had friends who’ve lost kids. That is just an unfathomable thing to comprehend. But when you realize this is what has been happening since the dawn of time—that sons and daughters have been losing their mothers and fathers—you suddenly feel less alone. You feel hands reaching out touching your shoulder. That’s when I started to understand, in that solitude of grief, there was this very visible worldwide mourning going on. I think it deepened me.

“By the time we came back, we were like ‘Just put me in, coach.’ We were rabid acting dogs. All we wanted to do was create. The energy we came back with seemed like what these characters experienced during the AIDS epidemic. It was a life-imitating-art-imitating-life kind of thing.”

Among the happy accidents that the pandemic made possible was that scenes could be shot in the very space where Rent was launched Off-Broadway, the New York Theater Workshop, which, otherwise, would have been occupied with another show. “It was if John was doing some kind of orchestration from the great beyond,” Garfield said. “We were the only live theater during the pandemic in the whole of New York City. That wasn’t lost on us. It was deeply humbling.

“We felt a heightened responsibility to perform and give ourselves—not only on behalf of John but on behalf of the whole of the theater community that longing, like we were, to work and give our gifts and give the medicine that is different from the medicine that my brother gives but is still medicine nonetheless. Music-story-art is the right hand of medicine to me, and the left hand is what my brother does. I’m not bitter about my brother being a doctor. The favorite child. I’m an actor. I had to be an actor. I needed more attention. But I really think we need both. We see what happens when there is no art in the culture. You look at the previous White House administration. It’s a lack of soul. When there’s a lack of soul, you know there’s a lack of art.” 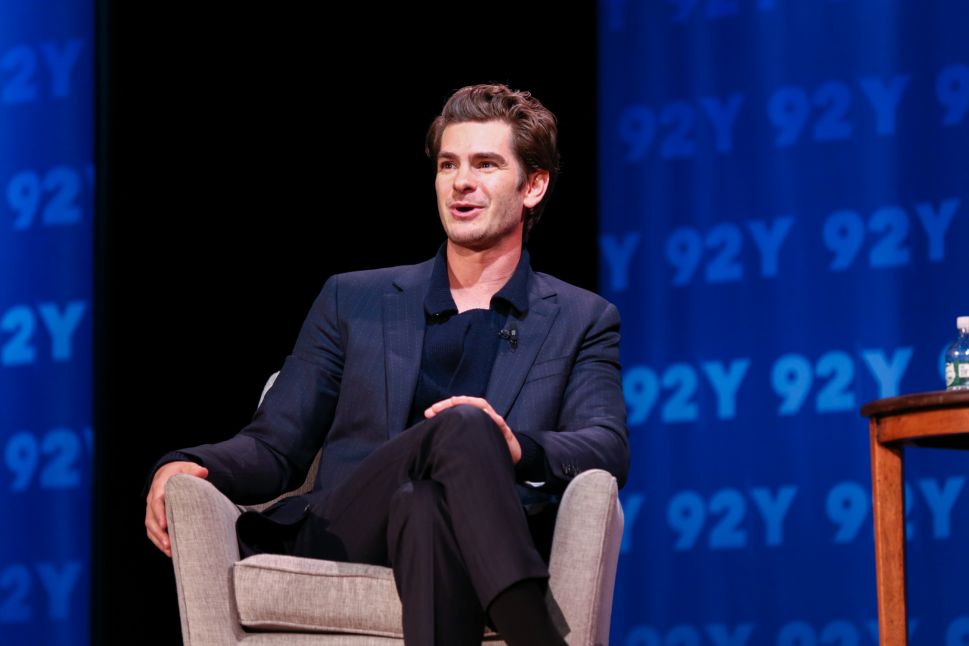