BUDAPEST, HUNGARY – MARCH 01: People arrive to the West Train Station from Zahony after border crossing at Zahony-Csap as they flee Ukraine on March 01, 2022 in Budapest, Hungary. (Photo by Janos Kummer/Getty Images)jledbetter
By Laura Kirkpatrick • 03/02/22 4:12pm

On Tuesday March 1, the world watched an armed Russian convoy inch towards Kyiv. Among United Nations staff still in Ukraine, word spread about a different set of convoys, composed mostly of privately owned cars behind lead U.N. vehicles to evacuate U.N. personnel, many of whom could hardly believe they were still in the country a week after the invasion began. U.N. employees who are Ukrainian nationals told Observer they felt abandoned in the war zone and hoped the convoys, departing from near the capital and also in the embattled east of the country, would take them to more secure locations. U.N. protocol prioritizes the removal of  international staff and their dependents before national or local staff; the latter are to be relocated or evacuated only when their security is endangered as a result of U.N. employment.

The anxious scene had an eerie echo. In August of 2021, the U.N. rushed to evacuate staff from Afghanistan as the Taliban reclaimed the country much more quickly than any intelligence report predicted. This left local staff potentially vulnerable to Taliban reprisals as the U.N. worked to eventually secure visas and transit out of the country.

As of this story’s publication on March 2, some of the local U.N. employees had been moved to safe locations, according to U.N. officials.

The communications about the Ukraine convoys, and how to either relocate or evacuate, took place mainly on private social media messaging options and secure messaging apps – word of mouth in the 21st century – as staff felt pressured not to do anything publicly. Staff at the U.N. Development Program (UNDP), one of the 18 U.N. agencies operating in Ukraine before the war, received a strongly worded request in late Ferbuary to “use discretion and good judgement (sic) when posting or leaving comments on social media, to help protect your colleagues and the reputation of UNDP.”

This angered some employees. “As U.N. staff, we’re not supposed to post anything political on social media,” said one former U.N. Ukraine staff member who asked to remain anonymous for their protection, “but this isn’t politics, it’s war. It’s the wellbeing of people.”

Stephane Dujarric, the spokesman for the Secretary General, confirmed the relocation and evacuation protocol, insisting that a security risk management approach underpinned all security decision-making. “In this case, U.N. entities weighed the risks of remaining in place versus evacuating or relocating staff to safer locations, also taking into consideration the criticality of the programs these staff members work on,” Dujarric said.

For the prior two weeks, some of the personnel at the U.N.’s 18 agencies and programs operating in Ukraine had sought to leave the country in the face of Russia’s invasion. As Russia amplified its invasion, U.N. Ukraine was working with the top levels of U.N. management to get people out, following the organization’s established protocol.

Since the invasion, staff in Kyiv were directed to shelter in place or to a hotel which has since closed. Agencies sent emails telling their personnel not to try to relocate or evacuate as it became too dangerous to leave cities across the country, according to staff on the ground. Some agencies tried to have live meetings to discuss evacuation and relocation, on Zoom and other platforms. These proved inaccessible to some staff, including those sheltering in subterranean metro stations, experiencing electricity outages or whose neighborhoods were under fire, as happened to one staff member who spoke to Observer on the condition of anonymity.  The videos were erased and unavailable for viewing later “due to security concerns,” according to a message thread about the videos shown to Observer.

Aitor Arauz, president of the U.N. Staff Union, said that all U.N. Ukraine staff were currently accounted for.

“In countries where there are peacekeeping missions, we have the logistical capacity to relocate and evacuate staff. In countries like Ukraine, where we only have civilian and humanitarian operations, we have to work with the civilian staff to provide resources, as our logistic autonomy is more limited,” said Arauz.

At the same time the organization is working to assist all relevant staff, including Ukrainian nationals, who do not need to be onsite with relocation and evacuation, it is bringing in others whose agencies provide crucial services, Arauz pointed out. Incoming included agencies and programs like the High Commission on Refugees and the Office for the Coordination of Humanitarian Affairs, whose work demands additional deployment to conflict areas.

On 9:00 AM Wednesday morning local time, the Kyiv Independent reported that one convoy would depart from the city’s Ramada hotel, but all staff were responsible for getting to the hotel, and the U.N. lead vehicles would not provide any personnel transportation. That afternoon, U.N. spokesman Farhan Aziz Haq said that “at least five convoys are currently underway to relocate critical UN staff to safer locations within Ukraine, and others to international borders. A series of similar movements yesterday passed without serious incident.” 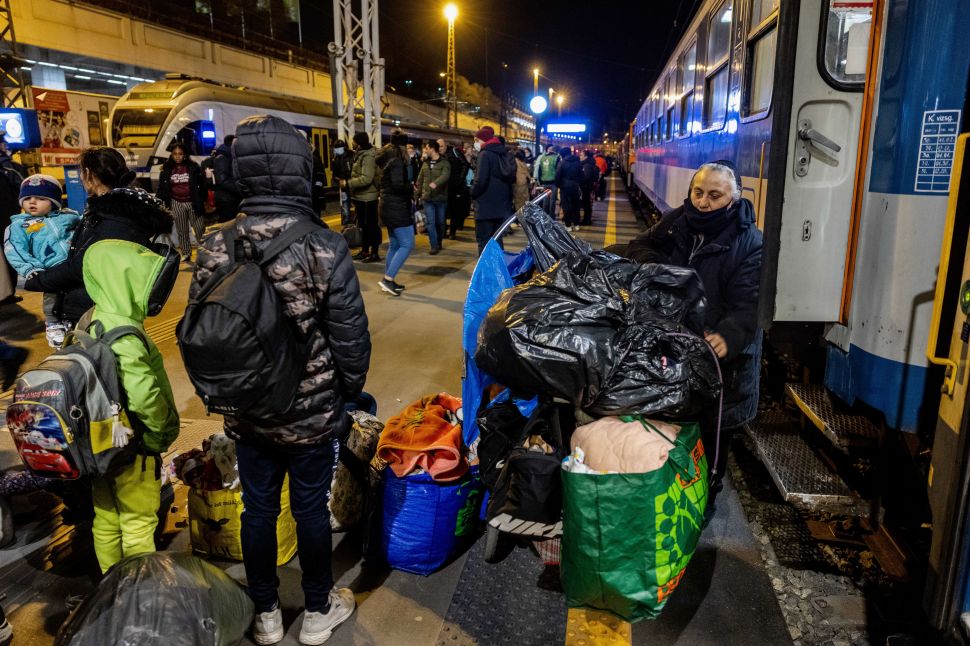