For almost all filmmakers, nostalgia is a kind of death— the amber that traps their emotions and ideas in the ossifying patina of sentimentality. But Richard Linklater has always been a Texas-sized step apart from the typical.

In a career spanning more than 30 years and including over 20 feature films, the Austin-based impresario has managed to ride nostalgia like lightning. In his best films, including the Before trilogy and the Oscar-nominated Boyhood, he has been able to turn nostalgia into an animating force, sometimes literally. For Linklater, nostalgia has never been simply a means of resurrecting the past, but a way of re-evaluating and savoring the present. Whereas for virtually any other director nostalgia is a surefire way to suck the life out of the room, Linklater uses it to inject vitality.

Certainly that’s true of the best moments in Apollo 10 ½: A Space Age Childhood, his latest film and the third Linklater feature to use an animation process similar to rotoscoping. The film takes us to Linklater’s childhood in the rapidly expanding Houston suburb of El Lago during the summer when astronauts from down the street were capturing the attention and imagination of the world with the Apollo 11 moon landing. (Neil Armstrong, Buzz Aldrin, and other astronauts lived in El Lago; Mission Control was ten minutes away.)

Apollo 10 ½ is most alive in instances that feel almost too insignificant to be recalled: Stan (first-timer Milo Coy) and his brother determining which cars at the drive-in have “neckers” in the front seat based on whether the brake lights are flashing on or off; the tablespoons of sugar they dump on already sweetened Frosted Flakes; an elementary school game of kickball hotly contested on a shadeless suburban blacktop.

Rather than a straight reminiscence, Linklater— who frames his story with adult Stan’s spirited narration, provided by frequent collaborator Jack Black (2003’s School of Rock and 2011’s Bernie)— imagines himself not simply remembering the launch, but actually beating Messrs. Armstrong and Aldrin to the moon in the top secret mission of the film’s title.

The scenes featuring his NASA recruiters (Shazam’s Zachary Levi and Glen Howell, who played John Glenn in Hidden Figures), as well as Stan’s training in the famed Vomit Comet, have none of the crackling specificity of his civilian life, where you can all but smell the putrid grass by the sewage treatment plant where the kids play football.

The purposefully flat animation also feels less fitting off planet than it does at home on Earth, where the faded colors bring to mind a Polaroid left on a sunny windowsill. You never feel Stan’s weightlessness in orbit in the same way you do the sting of one of three baseballs flung at him by his teammates, his Little League coach’s masochistic punishment for committing an error in a game.

The ’60s time frame of Apollo 10 ½ could be considered the first in Linklater’s Texas trilogy, alongside the ’70s setting of Dazed and Confused and the ’80s milieu of Everybody Wants Some!! For those who have followed his career, there’s little surprise that Linklater’s flights of memory are so much more effective than those of fantasy. He is just one of those people who mines cinematic wonder in the things most of us don’t even notice, while shrugging his shoulder to moments that leave many awestruck.

Stan’s trip to the moon may fade into the ether, but his ride down the highway with his brothers and sisters, all of them unsecured on the flatbed of a pickup truck is so brimming with immediacy that it won’t even matter.  You’ll still be feeling the wind in your hair well into the summer. 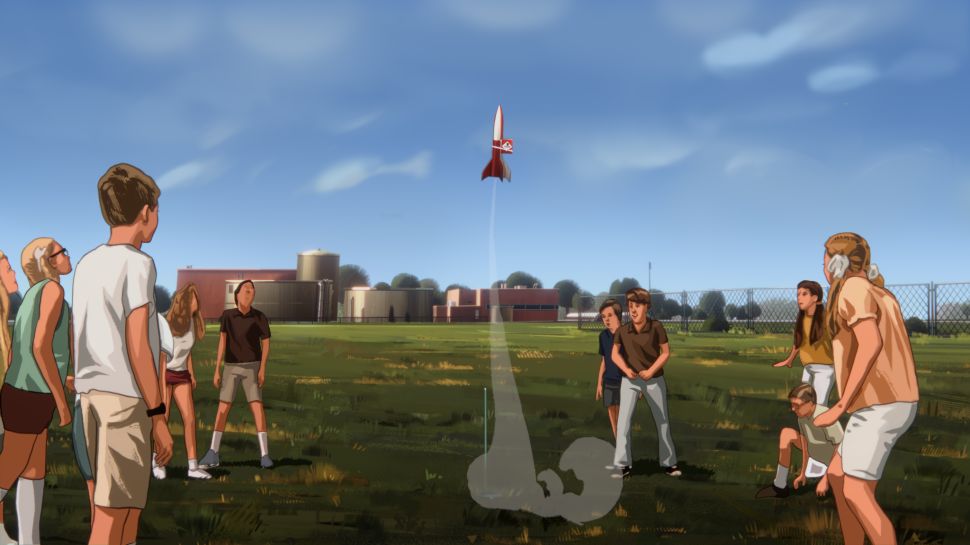