The British 1970 film, Bronco Bullfrog, starting March 25 at Film Forum, is about kids in the streets, full stop. Del (Del Walker) starts up a romance with Irene (Anne Gooding) and bounces around with his friend Joe, aka Bronco Bullfrog (Sam Shepherd), running from cops and parents through Stratford, East London. A year before starring in this neo-realist dream, Walker was talking to director Barney Platts-Mills while they made a short documentary of Walker and his friends doing improvisatory theater with director Joan Littlewood.

“Is this better than hanging about in the streets? Is that all you do?” Platts-Mills asks him.

That film is called Everybody’s An Actor, Shakespeare Said, but that statement is the plot of Bronco Bullfrog, almost in total. Now rereleased by Gabriele Caroti and Seventy-Seven, a “boutique movie and music label focusing on vintage, underseen, and underappreciated work,” Bronco Bullfrog is a funnel right back into 1969 East London, a bright black-and-white look at several working class kids with no future and all the time in the world. Before Quadrophenia, before the Jam, before the Sex Pistols, there was this.

“We both loved the Italian neo-realists, Barney and me,” cinematographer Adam Barker-Mill told me. “Joan and the boys had something.” In the late ‘60s, Littlewood had been working in a theater in East London, putting on shows with local teens. The gang of boys hanging about in front of the theater was slowing things down, so she put them to work.

“We were being a bit of a nuisance,” Bronco star Roy Haywood told me. “So she had us clean up this bomb site, get it ready for a playground. And then she had us come into the theater and start doing little scenes.” Everybody’s An Actor is a color document of their beginnings together, a brief verité note on the genuinely open aspects of the ‘60s, stripped of boomer romanticization. It is simply infinitely cool that a director steeped in both Artaud and Shakespeare was reaching out and making real theater with neighborhood kids. No platitudes here—they were doing the work.

It’s not entirely clear what the boys are acting out in Everybody’s An Actor—something to do with cops and teachers—but their teen dynamics are crystal clear: acting tough, being sweeter than they imagine. There was better to be done, and the boys knew it. Haywood told Platts-Mills to “make a proper film,” and the idea for Bronco Bullfrog was born.

There is no small measure of mystery around the script. Haywood told me that he and his friend, Dave Foulger, wrote it; Mill said they improvised it when they didn’t read the script Platts-Mills wrote. On top of this, Haywood recalled the script getting an award from the British Writers Guild.

“Richard Attenborough gave us the award,” Haywood said. Despite this being widely reported, I have yet to find documentation anywhere. But this is what Bullfrog is like—a phantom you see reflected all over. You will instantly realize how it served as the source material for the 1979 film Quadrophenia. Entire shot sequences were lifted, in fact. (Not to spoil anything, but a motorbike gets crunched under a lorry.) Barker-Mill hasn’t seen Quadrophenia, though. Some claim Tarantino replicated it in a few of his exquisite framings, and there is no doubt that in terms of contrast and grain, Bronco Bullfrog is the equal, at least, of any Antonioni film.

Filmed with a “blimped Arriflex” and shot on Kodak Eastman Double -X 35 mm black-and-white, Bronco Bullfrog was made with natural light, and improvised fixes, like Barker-Mill shining a lamp against a white wall. “Can be quite warm,” he told me.

The acting is adorably rough and loose, surging between weird recitations and fast ad libs. (“It’s not really acting is it,” Haywood says in Everybody’s An Actor. “It’s more like remembering.”) Most scenes were done in one take.

“Non-actors aren’t able to vary their performances,” Barker-Mill said. “We just worked with what we got.”

Walker’s Del is paired with Irene, who was played by Anne Gooding, the only person who had acted before and wasn’t from Stratford. In life, Walker was a plumber and it was Haywood who was the welder. Roy plays Roy, his mate, and Shepherd (no relation) plays Bronco Bullfrog, the local tough just sprung from Borstal, a juvenile detention center. (Think Spofford, but London.) Bronco enlists Del and Roy for a “job”—petty larceny. They load a van full of appliances taken off a train car.

“That was my older brother,” Haywood told me. “There was a marshaling yard in Temple Mills, and the fellas would just help themselves. I came down one morning, and the middle room was full of boxes.”

The score is by an obscure psych band named Audience, who the film crew saw playing at the 100 Club on Oxford Street. Their songs manage to evoke the Who and various more flowery American outfits, and the bass guitar is mixed comically high.

What Bronco ends up feeling like more than the Italian neo-realism that came before is another film that came fourteen years after: Stranger Than Paradise. Jim Jarmusch’s trio is an exact mirror of the boy-boy-girl triangle that Del, Bronco, and Irene form in the last half of the film. The aimlessness of the journey and the sort of relaxed sense of anxiety is also familiar. Bronco Bullfrog is animated by the same sense of luxuriating in the film stock itself while having enough time to be bored and being wired enough by precarity to enjoy it.

“Everything in that film is real,” Haywood told me. “Maybe it didn’t happen to us, but it happened to someone we knew. It’s just Stratford.” 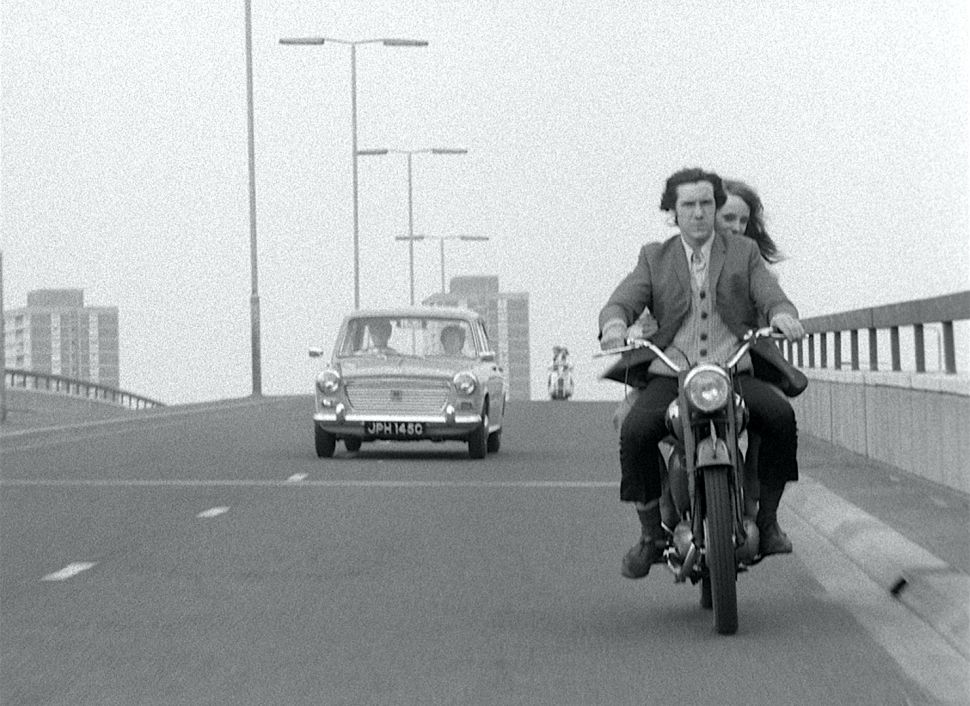