It’s almost time for eager festival-goers to make their annual pilgrimage to California for Coachella, the music festival that also serves as an Instagram-filled desert moment overflowing with flower crowns, crop tops and a whole lot of fringe. Due to the coronavirus pandemic, It’s been a minute since the last in-person Coachella event, but the desert extravaganza is officially back next month, occupying two weekends (April 15 to 17 and April 22 to 24), because people are just that excited to spend their days running around the dusty Indio campgrounds. Both Coachella weekends are already fully sold out, so if you haven’t figured out your accommodations just yet, you’re going to want to get on that ASAP.

Even if you’re not a Coachella enthusiast, a trip to Palm Springs is never a bad idea. Below, see the best, most luxurious hotels to book for Coachella, but also for your next desert getaway.

The idyllic Parker Palm Springs was entirely redesigned by Jonathan Adler in 2016, so you know it’s absolutely picture-perfect. The charming hotel, a member of Leading Hotels of the World, is composed of 144 rooms, including 12 villas and the two-bedroom Gene Autry Residence. For those who aren’t set on spending every second at Coachella, there’s plenty to do at the Parker Palm Springs; the hotel is situated on 13 acres, and is equipped with two pools, a croquet court and clay tennis courts. There’s also a luxe spa, the Palm Springs Yacht Club, which is outfitted with 15 treatment rooms and custom treatments, in addition to no less than five separate dining options. Parker Palm Springs.

La Quinta is perhaps one of the best-known hotels in the area, and it’s also surely the largest, with 617 casita-style rooms and 161 villas spread out over 45 acres. The hotel boasts 41 pools throughout the property (though several of those are private pools for personal accommodations), as well as seven restaurants and a spa. The historic hotel, which dates back to 1926, is also perfect for golf enthusiasts as well as Coachella revelers, since it’s home to three courses. La Quinta Resort & Club.

L’Horizon is a perfect option for those interested in a more relaxing getaway, as it’s adults-only and doesn’t allow guests under the age of 21. The midcentury hotel, which reopened in 2015 after receiving a multimillion-dollar renovation, is comprised of 25 semi-detached secluded and private bungalows, all of which pay homage to the three-acre property’s 1960s heyday. The hotelier behind L’Horizon, Steve Hermann, also recently unveiled the luxurious Hermann Bungalows, a set of 24 accommodations situated right next door to L’Horizon. There’s also a pool, al fresco restaurant, spa and private boutique. L’Horizon.

The low-key Avalon Hotel is located in downtown Palm Springs. The hotel features 67 Spanish-style rooms, ranging from petite studios to private bungalow villas; the bungalows are all equipped with gas fireplaces and full kitchens, in addition to furnished private patios and separate living and dining rooms. There are three pools on the property, as well as a spa and one restaurant, Chi Chi. Avalon Palm Springs.

The sleek Kimpton Rowan Palm Springs is a physical standout in downtown Palm Springs, considering it’s the tallest building in the area. The seven-story hotel features 153 rooms and suites, all of which have impressive views of the neighboring mountains and desert landscape. There’s a rooftop pool with a bar, in addition to two restaurants and another lobby bar. Rowan Palm Springs. 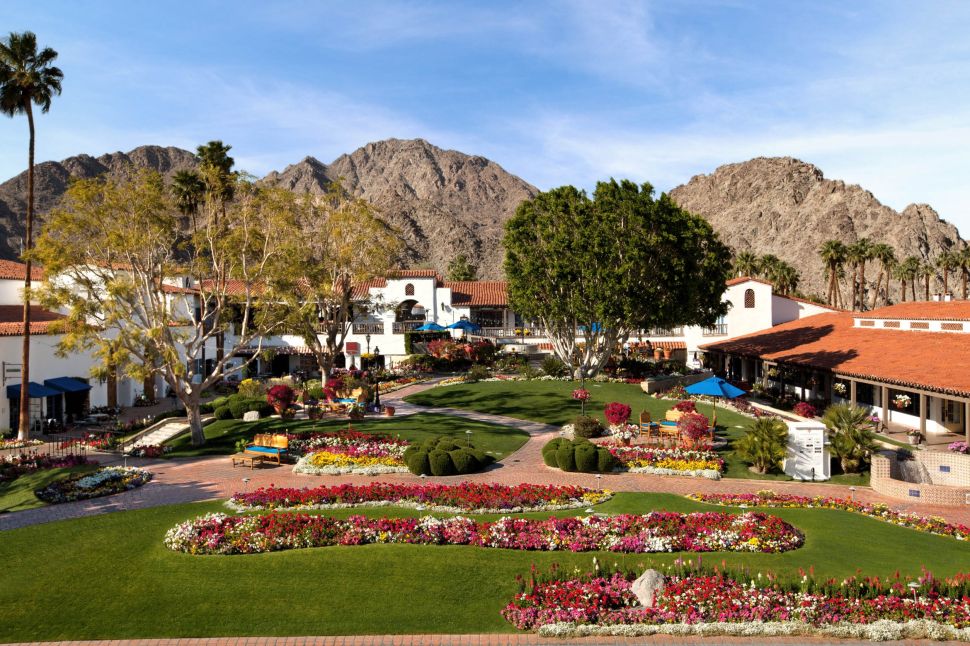