There are two extremely precious natural resources deep beneath West Virginia and other states that mine. One is coal harvested in the earth’s crust, amassing fortunes for the owners. The other is the people who work those mines, mostly men, who labor under incredibly dangerous conditions. One of these resources can be treated as less than worthless by the bosses. Until it all comes crashing down.

The documentary play Coal Country examines the aftermath of such a cataclysm, the Upper Big Branch Mine disaster of 2010, in which 29 out of 31 miners were killed in a coal dust explosion that could have been avoided if proper ventilation procedures had been followed. Theater makers Erik Jensen and Jessica Blank, teaming up with country singer-songwriter Steve Earle, have created an informative, often harrowing portrait of a community going through unimaginable heartbreak and painful reckoning. With a script drawn verbatim from interviews with survivors and relatives in West Virginia, and Earle’s own rootsy original tunes, the piece is an education about labor and accountability in America.

If the title rings a bell for theatergoers, it’s because the production had opened at the Public Theater in March 2020, days before the pandemic lockdown. This return in-person engagement (through April 17) is co-produced by the Public and the audiobook giant Audible, which released an audio version of the show last September.

Earle kicks off the night with “John Henry,” his tribute to the folk hero who died trying to beat a machine at hammering, and thus setting the theme for the night: workers caught between dignity and rapacious, industrialized capitalism. We get to know the characters (real-life people), played by a solid cast of stage veterans. There’s Gary (Thomas Kopache), an old-timer who thought he’d seen it all; lanky, quick-tempered Tommy (Michael Laurence), who loses three of his family in the blast; Patti (Mary Bacon), fiancée of one of the doomed miners; easygoing Goose (Carl Palmer) and his wife, Mindi (Amelia Campbell), who get off relatively unscathed, except for a tortured conscience; and Roosevelt (Ezra Knight), whose father is trapped in the shaft on that dreadful day. Other characters take center stage to share reminiscences in the form of court testimony on the day that CEO Don Blankenship is found guilty.

Not that there was true justice for the families and friends of the fallen 29. While at the top of the show, a judge (Kym Gomes) makes it clear that Blankenship has been convicted of conspiring to violate mine health and safety standards, the punishment does not fit the crime (spoiler alert). Blankenship gets a year in prison and a fine of $250,000, a drop in the bucket of his wealth. The justified shock and rage among the survivors ripples throughout the Cherry Lane Theatre. Compared to the unspeakable horrors relatives went through on the day—not knowing for hours if their loved ones were dead, getting false hope from the company, only to have it dashed—Blankenship’s light sentence was insult added to tragedy.

Earle’s smoky, jangly, ruminative songs are woven smartly throughout, providing respite from the sheer emotional weight of the testimony, and poetic distance from the heaviness of facts. In the rousing climactic number, “It’s About Blood,” the cast joins Earle on stage as he sings out the name of every man who died in the accident, with this Biblical refrain: “It’s about muscle / It’s about bone / It’s about a river running thicker than ’cause / It’s about blood.” For most of these workers, the connection runs deep between father and son, a bond made even closer and more mysterious by work beneath the earth.

Director Blank’s unpretentious, stripped-down staging flows organically from speech to song, occasionally using wooden benches as a stand-in for mining equipment or elements of a courtroom. Lit with majestic shafts of light articulating rich pools of shadow by David Lander, with a carefully balanced sound design by Darron L. West, this scrupulous production throws light on a world about which most of us are ignorant—although blood of its workers makes that light possible. 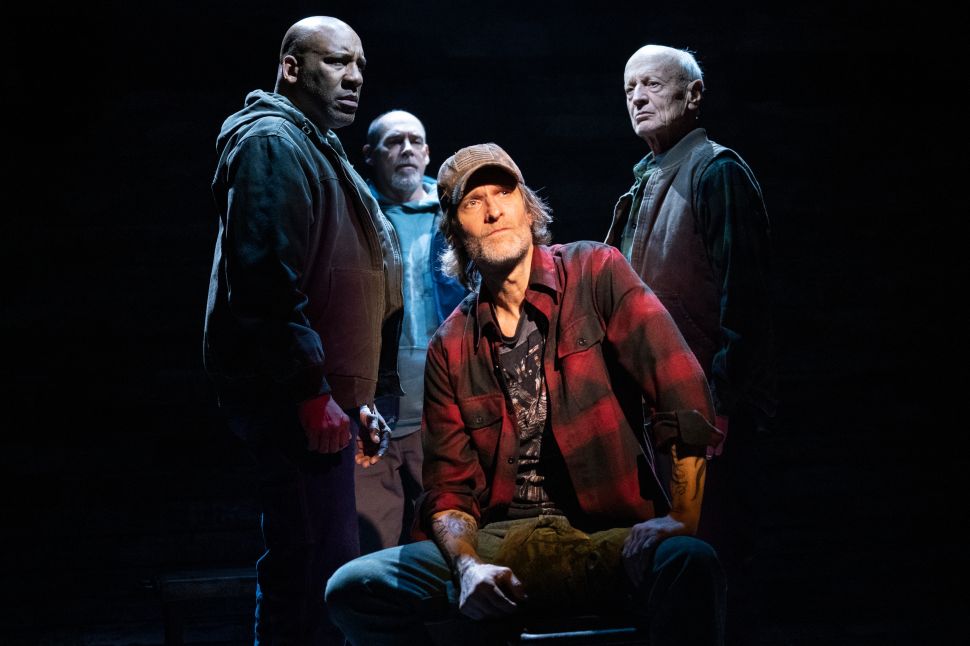