While Everything Everywhere All At Once feels reminiscent of several films, including The Matrix and Being John Malkovich, it’s also like nothing you’ve ever seen before. Written and directed by Daniel Kwan and Daniel Scheinert, collectively known as Daniels, the movie is an explosion of creative weirdness that is equal parts exhilarating and overwhelming.

Michelle Yeoh plays an exhausted Chinese immigrant named Evelyn Wang, who runs a laundromat and has a fractured relationship with her husband Waymond (Ke Huy Quan) and her adult daughter Joy (Stephanie Hsu). As her Chinese New Year party approaches, Evelyn is overwhelmed by the arrival of her estranged father Gong Gong (James Hong) and a tax deadline that will determine the fate of the laundromat—so much so that she has almost given up on the possibility of something more in her life. Her existence is about as mundane as it gets, so Evelyn is surprised to discover that she’s the key to saving the multiverse from a mysterious evil power.

Daniels’ approach to the multiverse is unique, based on the supposition that each decision we make splits our possible reality into two paths, ultimately creating infinite universes. In one universe, Evelyn is an exhausted wife and mother; in another, she’s a famous kung-fu star. There is an even a reality where Evelyn exists as an ordinary woman with hot dogs for fingers (which should tell you what sort of tone Everything Everywhere All At Once embraces). When “Alpha” Waymond arrives from another universe, jolting Evelyn out of her dull reality, she becomes drawn into a bizarre adventure that involves “verse-jumping” to draw on the skills of her other selves as she battles a never-ending barrage of fighters from across the multiverse. She ultimately is forced to go head to head with nihilistic villain Jobu Tupaki, who wants to suck the world into a literal everything bagel (seriously).

This is a film where anything goes, whether it’s Evelyn fighting a pant-less opponent who has tapped into his multiverse skills by leaping onto a butt plug or coming up against Big Nose (Jenny Slate), who wields her tiny Pomeranian as a weapon. The visuals, especially the costumes, are outlandish and increasingly wild, but there’s also a sense of heart under all the madness. Evelyn’s journey through the possible iterations of her life allows her to come to terms with the one she currently lives, as well as her relationships with Waymond and Joy. It takes a bit of winding, unconventional path to arrive at those reconciliations, but Evelyn’s emotional arc feels fulfilling, especially in the hands of Yeoh, who is given plenty to do in this movie.

It would be easy to make comparisons to films like The Matrix or even Sliding Doors, another film that played with the idea of “what if,” but the truth is that Hollywood has never allowed Asian protagonists to lead a story like this before. Have we ever seen a Chinese-American woman get to embrace high-blown action and emotional gravitas on the big screen without the movie making an issue of her race or relying on stereotypes? Despite it’s too-long run time and some quirky moments that will feel too visceral for some viewers, Everything Everywhere All At Once is a remarkable achievement in many ways. It’s ground-breaking because it allows a new perspective, but it’s also just blatantly weird. It’s not glossy or careful; the film is an onslaught of visual and thematic ideas that will frequently make you think “How did they get away with this?” It’s a good thing they did: In an era of sequels and remakes, something this outside the box is a welcome alternate reality. 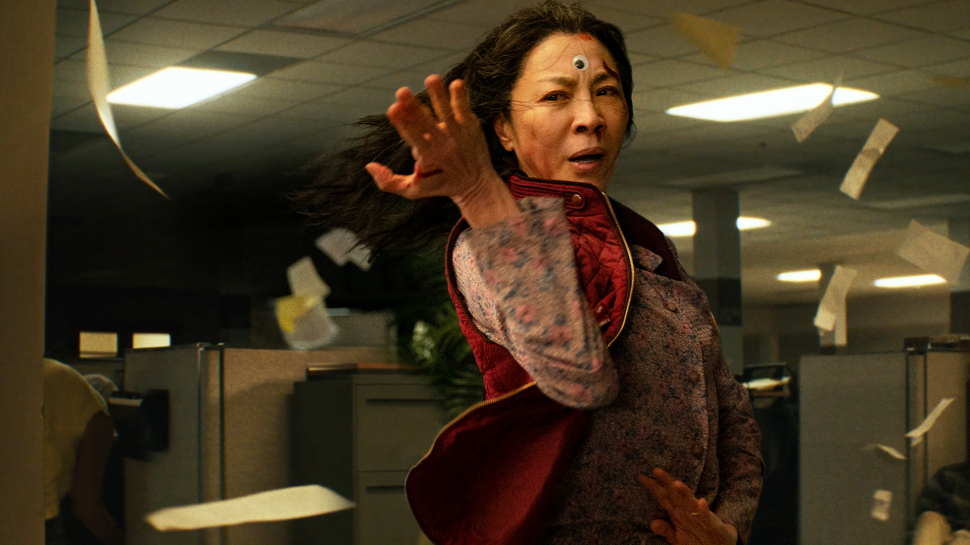