It’s interesting to see what actors in unremarkable but popular cornball hits will do to forge a respected artistic future in work that makes more challenging demands of their talents. Like Robert Pattinson after the Twilight vampire series in The Rover, teen idol Zac Efron now goes all out to disfigure himself and prove he’s capable of much more than high school musicals.  Of course he already did that playing serial killer Ted Bundy, but the hair-raising Australian thriller Gold stretches his range and physical endurance far beyond anything his fans ever dreamed of.

In this harrowing two-handed survival epic, he plays Man One —a battered, filthy, bearded drifter, sitting in a fly-covered outdoor toilet in the middle of the desert, waiting for a ride to something called “The Compound”. Along comes Man Two, a cynical truck driver played by Anthony Hayes, the highly regarded Australian actor who also directed Gold, and co-wrote the screenplay (with Polly Smyth). For a few hundred dollars, Man Two agrees to drive Man One to the mysterious Compound, one of the last places on Earth that offers safety from a violent, post-apocalyptic world. The trip will take days, and the gruff, grouchy and hostile driver warns Man Two that after he gets there, with his quiet nature and puppy-dog eyes, he’ll be in for a hard time of it. “You gonna be a target!” he snarls. After a long, dusty ride across a desert inhabited by snakes, scorpions, and packs of man eating wild dogs, they come across an enormous rock that turns out to be the world’s biggest hunk of undiscovered gold. Man One drives away to find something big enough to excavate the gold while Man Two stays behind to guard it, running out of and canned beans, and from this point on, the film becomes a one-man show, showcasing the various strengths and abilities of Zac Efron to hold the viewer spellbound.

Limping on one injured leg, dehydrated and near death, his face boiled by the relentless sun into a field of poisoned sores, a bit of hope arrives when he finds some shelter in the hull of a wrecked airplane, but this movie is just reaching the halfway mark. There’s still murder ahead as well as a massive sandstorm. When the firewood runs out, the howls of the wild dogs get closer and the forthcoming horrors take on an admirable inventiveness that is always believable. Anthony Hayes’ grounded, suspenseful direction spares no assault on the senses, and the writing is both minimal and brutal at the same time. Zac Efron redefines the nature of career ambition by building character from the ground floor up. By the time the action erupts into fang-dripping action in the turbulent dogfight finale, you might find it impossible to get through the rest of the film with your eyes open. I think the point of this grim exercise in futility is not to mess with Mother Nature, but I’m not sure. I say go see Gold and thrill to Zac Efron’s scope and range, but don’t expect a happy ending. There are no happy endings in post-apocalyptic movies set in the Australian outback when you run out of hope and bottled . 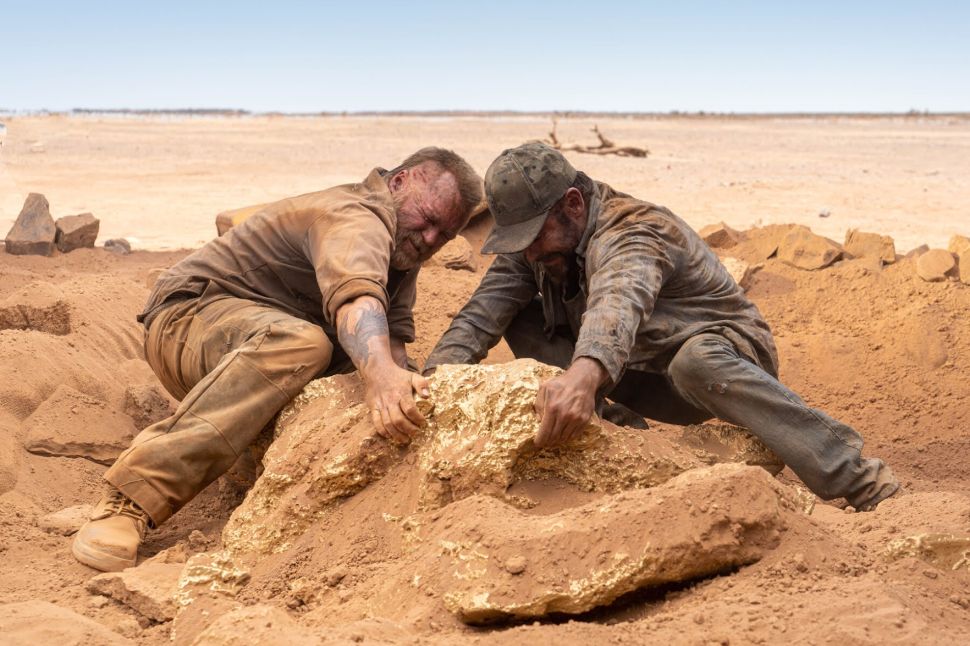