March came in like a lioness when Lise Davidsen finally got the chance to show her stuff at the Metropolitan Opera. Since she won Operalia in 2015, the Norwegian soprano has become the world’s most buzzed-about young classical singer whose every appearance or new recording is eagerly debated. While both her debut in November 2019 as Lisa in Tchaikovsky’s Queen of Spades and her first-ever Eva in Wagner’s Die Meistersinger von Nürnberg last fall have been welcomed by Met audiences, there’s been widespread sentiment that neither role showed her at her best.

However, any reservations were finally swept away last Tuesday by her thrilling portrayal of the title character of Ariadne auf Naxos when Richard Strauss’s opera returned to Lincoln Center after more than a decade. Elijah Moshinsky’s bracingly beautiful production which premiered in 1993 with Jessye Norman as Ariadne has remained one of the company’s most beloved. and it was great to have it back excellently revived by Stephen Pickover.

Strauss’s delightful concoction actually gave Davidsen two roles for the price of one. The Prologue concerns a behind-the-scenes look at the preparations for a lavish entertainment at the home of the richest man in 18th century Vienna. Both hijinks by a commedia dell’arte troupe and a serious opera seria entitled Ariadne auf Naxos are planned prior to a fireworks display. However, dinner has run long, so the Major-Domo commands that both entertainments be given simultaneously! Davidsen’s haughty Prima Donna protests that her role must not be cut while the opera’s Composer—a trouser role taken by mezzo soprano Isabel Leonard—laments that his masterpiece will be ruined by this absurd turn of events.

When Strauss and his librettist Hugo von Hofmannsthal premiered the work in 1912, the Prologue didn’t yet exist. Instead, an abridged version of Molière’s Le Bourgeois Gentilhomme was followed by the Opera in which the mythic figure of Ariadne, abandoned on the island of Naxos by Theseus, awaits death while being lectured on love by Zerbinetta and her troupe of comedians. The performance’s great length and confusion over the relevance of the Molière caused Strauss and Hofmannsthal to jettison the play and create the 40-minute Prologue which provides a compelling context for the more serious Opera proper that follows.

Both the Davidsen’s Prima Donna and Zerbinetta (played by soprano Brenda Rae) had to bide their time as the Prologue was dominated by the idealistic young Composer. Unfortunately, Leonard, whose voice has grown darker and heavier in recent years, didn’t find the soprano role a congenial fit. Her soulful outbursts emerged strained and the high climaxes were frequently flat. While she looked slim and plausibly masculine, her character’s heady intoxication with music—and Zerbinetta—failed to convince.

Happily, the Prologue also featured the splendid Music-Master of Johannes Martin Kränzle who was also a standout as a deliciously cranky Beckmesser in last fall’s Meistersinger. His frustrated exchanges with the foppishly officious Major-Domo struck comic gold. Former matinee-idol baritone Wolfgang Brendel, absent from the Met since 2007, reveled in the extensive speaking role.

After an especially long intermission, the dizzying whirl of backstage was replaced by Michael Yeargan’s ravishing blue star-filled sky representing Naxos. Najade, Dryade and Echo, three nymphs each atop a gliding platform rising ten or more feet above the stage, comforted the abandoned heroine. The blend among mellifluous Deanna Breiwick, Tamara Mumford and Maureen McKay wasn’t always ideal, but they beautifully set the stage for Davidsen’s first big monologue.

Regally clad in a deep blue cape with a glistening crown, the soprano bemoaned the Cretan’s princess’s devastating fate with poise and opulence. She crested Strauss’s soaring climaxes with little apparent effort, filling the huge Met as few have done in recent memory. Her enormous high notes blazed and singed; some have speculated, “Not since…Birgit Nilsson? Or Gwyneth Jones?”

So breathless was the audience’s delight that an ovation erupted after her second monologue “Es gibt ein Reich,” but superb veteran conductor Marek Janowski soldiered on but music for the next minute or so was completely drowned out.

Strauss then gives Zerbinetta her chance to shine in one of the most extended and difficult of all coloratura arias, “Grossmächtige Prinzessin.” Rae, who has been a notable Zerbinetta throughout Europe for several years, impressed during her demanding 13-minute harangue to the unimpressed Ariadne by imbuing it with womanly warmth and tenderness rather than with the usual soubrette-shtick.

She adeptly negotiated the fanciful florid curlicues and sparkling high notes and trills, but yet one consistently wanted a bit more voice. Perhaps next to a less superhuman soprano than Davidsen or in a house smaller than the capacious Met, Rae’s Zerbinetta might have seemed less frustratingly small-scaled. Similar concerns, however, were raised at her debut in Handel’s Agrippina two years ago.

Rae’s rambunctious troupe which included Alok Kumar, Ryan Speedo Green and Myles Mykkanen was led by Sean Michael Plumb in a mellifluous Met debut as Harlekin. They admirably kept up with her infectious energy and gracefully made way for the nymphs’ return to announce the arrival not of Death but of the god Bacchus.

Brandon Jovanovich’s offstage cries of “Circe, Circe” did not inspire much confidence as he sounded hoarse to the point that one feared he might entirely lose his voice. He did not, although his virile exhortations to the reluctant princess sounded more effortful than they should. It’s been said that Strauss hated tenors as much as he loved sopranos, and Bacchus certainly suggests there may be some truth to it. But it’s to Javanovich’s credit that he kept up with Davidsen as she enthusiastically fell for his handsome god and soared ever more majestically to her complete Met triumph!

Although there is an HD transmission of Ariadne to movie theaters worldwide on March 12, I encourage anyone near New York City to try to catch this production in person at the Met as microphones can only begin to capture the power and delicacy of Davidsen now in a perfect role for her prodigal gifts.

With Anna Netrebko off the roster perhaps forever, the Met needs a new reigning diva, and Davidsen is surely one of its prime candidates. She returns for another Strauss role, Chrysothemis in Elektra, on April 1. Sonya Yoncheva, another Peter Gelb favorite, is currently reigning at the house as Élisabeth in an exciting new Don Carlos, while American soprano Nadine Sierra stars in a sure-to-be-controversial Lucia di Lammermoor re-set in America’s Rust Belt on April 23. Will one of them become the next Anna? 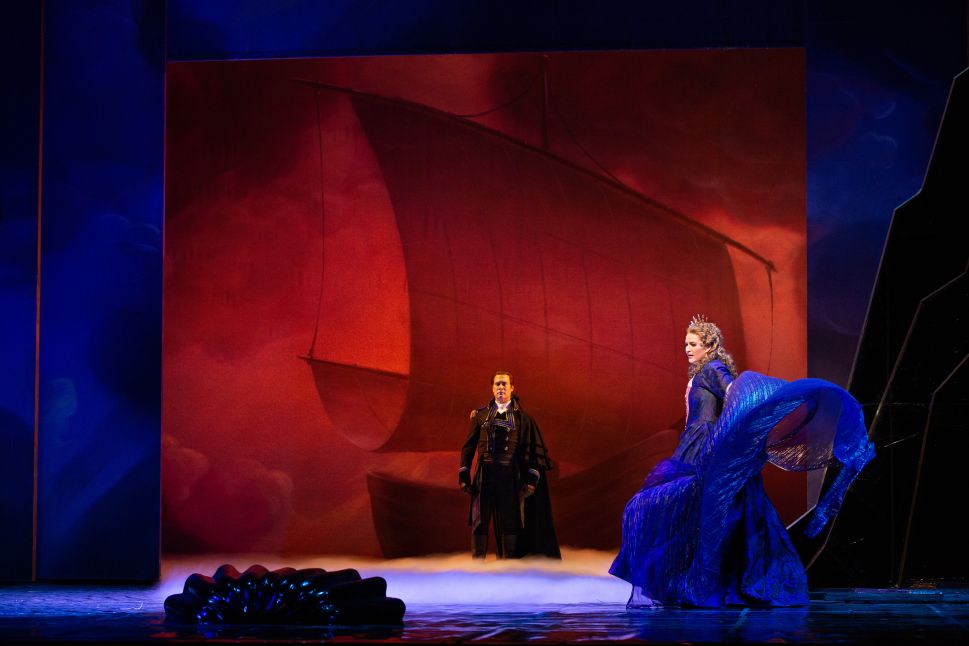