When Marina Abramović traveled to Kyiv in September of last year, she didn’t know that her monument would be at the heart of the war. Her piece, Crystal Wall of Crying, set at the Babyn Yar Holocaust Memorial, commemorates Jews killed in the Babyn Yar massacre, which was unveiled on the 80th anniversary since Nazi troops gunned down nearly 34,000 Jewish men, women and children in 1941. At the time, the Serbian artist said: “I want to create the image that is transcendental about any war at any time at any place.”

Now, it feels prophetic, but the artist is no stranger to that. In her film installation Seven Deaths—set to the seven Maria Callas solos—she walks through a dystopian world wearing a hazmat suit, escaping an invisible poison. It was shot in 2019, but it feels relevant to the Covid-19 pandemic.

Abramović is 75, but she’s a busy artist. She recently opened an exhibition at the Sean Kelly Gallery in New York City, called “Performative,” which runs until April 16. The exhibition showcases a select number of works from her 50-year career, including her famous 2010 piece, The Artist is Present, where she sat for three months looking at one gallery goer at a time seated before her at the Museum of Modern Art, gazing into the eyes of over a thousand strangers (many were moved to tears).

She also recently released a deck of cards called The Marina Abramović Method  and will tour with her opera-performance art piece 7 Deaths of Maria Callas, to the Deutsche Opera in Berlin on April 8, and at the at the Teatro di San Carlo in Naples from May 13 to 15. She is also slated to be the first woman to have a solo exhibition at the Royal Academy of Art in London, in 2023, breaking a new record in the Royal Academy’s 250 year history.

Abramovic just partnered with photographer Marco Anelli for an auction to support Ukraine for an auction on Artsy starting March 17, with all proceeds going towards Direct Relief’s emergency response fund. She took time out of her uber busy schedule to talk to Observer about the healing power of crystals, the Ukraine conflict, and her military edge.

Hi Marina, is now a good time to chat?

Ooh, you’re exacting. Have you always been that way?

I’ve been in a military family all my life. So, I’m not surprised. It’s simply the control.

That’s the key to your success in many ways.

It’s so important to be organized. I’ve never been spoiled in my life. I learned that if you go to Japan, and you’re on time, you’re late because you’re supposed to be 15 minutes early. In Germany it’s the exact same. In France, if you’re on time, they’re embarrassed because you’re supposed to be at least 45 minutes late. In Brazil, you only make appointments after the rain, whenever the rain stops.

What did you have for breakfast?

How do you feel about the situation in Ukraine?

You know, I’m very involved in this situation. I have been in Ukraine recently many times, as I built this memorial for the Babyn Yar Holocaust Memorial, my work is called The Crystal Wall of Crying, can you imagine? It has another meaning, now. It’s made of the black coal and quartz crystals, meant to purify and to heal. When we opened this in October, the President of Germany Frank-Walter Steinmeier and the President of Israel Isaac Herzog were there to commemorate the 80th anniversary since one of the worst massacres of the Holocaust, engaging in this moment of silence, it was very touching. The whole area has been bombed. The memorial is untouched. This is happening all over again. In 1943, 130,000 were killed in three days. And Russians came. Ukrainian President Volodymyr Zelensky is Jewish. I think it’s incredibly dangerous what’s happening. It’s not just for Ukraine but the whole world. We’re talking about a man who is trying to create a great Russia, he’s trying not to show his weakness. He will go to death. The more NATO and America get involved, it’s going to get worse. War is a very possible option.

It’s unbelievable your piece is still there, what can be done?

Nothing can be done. NATO and America are incredibly guilty for the situation. If they left Ukraine alone and neutral, this would not happen. It’s not just one side. Geopolitically, there’s so many elements. It started in Georgia in 2008. Everything was there, you could see it coming. Russia is so dangerous, and it has China. Just Covid-19 finished and now this. What can be done? Everyone has to do their part. Artists have to do their part. Politicians must do their part. As an artist, when the Balkan War happened, I made this piece called Balkan Baroque. Humans historically just continue killing each other, this is something so painful to realize. History is repeating. I always try to have some kind of big picture, looking from the outside, we have this wonderful planet and we’re destroying it.

Crystals are also a part of your Wooden Chairs on view at Sean Kelly Gallery in New York, right? The public is invited to sit on the chairs, too.

Yes, it’s all about healing. I call them transitory because they’re there for the experience, I don’t call them sculptures. It’s to sit in silence and look at the wall or amethyst and reflect on yourself and the world. It’s a quiet piece, quiet moments and especially in a city like New York.

What about the other pieces?

I show my first performance in the show Rhythm 10, and my latest video piece, Seven Deaths. And my piece The Artist is Present, it was crazy editing down this piece from 760 hours. I’m constantly on one side and the public is changing every day. It’s a mini-show I’m pretty proud of.

Where was Seven Deaths shot?

In Los Angeles, it’s a video installation of the Seven Deaths of Maria Callas with more elements. It’s shot in a reconstruction of the room where Maria Callas died in Paris. There’s singers, an orchestra, the whole thing. We’re going on tour with operas in Munich, Berlin, Amsterdam, and Naples. Then it’s coming to New York.

Oh, it’s a dream team to have. I already worked with Willem Dafoe on my piece The Life and Death of Marina Abramovic, he played everyone from the crazy joker to the lover. It was so important talking to him finding out about acting. Acting was something totally unknown to me. Performance art, everything is real. Acting you have to get into the role. Especially for dying. He explained to me how to become a character and be believable. That it’s possible. In the end, women always die for love. Callas psychologically died from a broken heart, she didn’t want to live anymore. This is why Dafoe is killing me over and over again.

My favorite part is when you’re throwing flower vases against a mirror, breaking the mirror over and over again. You’re not superstitious, are you?

I was Lucia, not me, it was taken from a scene in the Callas opera, Lucia di Lammermoor. If I break a mirror in my home—I’m very superstitious! Not as Lucia. That was not me. That’s the magic. She lost everything in love. She died of a broken heart. Lucia was the longest of all operas in the film because there’s a dying scene. She needs to destroy everything.

What about the scene from the film called The Poison, taken from Act III of Puccini’s Madame Butterfly, where you’re in a dystopian nightmare where everyone has to wear hazmat suits to protect themselves from green fog? Was that filmed before the pandemic?

It was! And it became such an ominous piece. I always think there’s something about art that sometimes has this quality you can reach, where you can sometimes predict the future. In some ways, it’s a good future, in others, it’s a bad future. It’s happened to me so many times in life. In The Poison it’s the radiation, in The Wall of Crying it’s the war, it’s a miracle it’s still there. But they can bomb it any minute now, we’ll see what will happen. Parts of the city that are just 300 meters away have been destroyed, including the nearby Jewish cemetery.

It’s not mumbo jumbo. It has been proven they have energy. Let’s hope this wall will survive. It’s called The Wall of Crying, but after crying, you have healing. There’s so much to heal.

Which crystals are the most powerful to heal?

It’s the type, size, and metals. I created my own structure comparing the human body with the body of the planet. I always thought clear crystals are the eyes of the planet, and the mineral tourmaline is the liver. Rose quartz is the heart. Amethyst is the mind and brain. Copper, I believe, is the nurse system of the planet. Hematite is iron, the blood of the planet. I have this imagination of the planet and how it relates to the human body, and how they can heal each other.

What can you tell us about your new deck of 30 cards you released with Laurence King Publishing, called The Marina Abramović Method?

It’s a process, much like cleaning the house. Each card has an image from 30 different performances I’ve done, and on the other side, there’s instructions to help change your mindset. One says, “Drink a glass of as slowly as you can,” another says “Listen to nature.” You can enter into another state of consciousness. To make the most of the cards, pick any card by chance.

With your piece The Artist is Present, which was performed at the Museum of Modern Art in 2010, looking back 12 years later, what do you see?

When I look at the faces of all these people, I feel them. If people come and see themselves, they’re 12 years older than they were in the film, you know? It was one of the most incredible experiences I had, it was so difficult. Each day could have been the last. It was three months long. It was the most difficult thing I could do, being motionless. I just was present. The emotional and physical pain of people coming to me, their emotions, it was overwhelming. When I stood up at the end, I was a different person.

There’s videos of you crying in this installation, while you were sitting there at the MoMA. What made you cry?

Them! There was so much pain in this city, there’s so much loneliness in this city. When you’re there you’re really empty and you just try to absorb them. I felt like a receptor ready for their emotions to come out.

Are you excited about your upcoming Royal Academy retrospective next year?

I am! In their 250-year history, they’ve never had a woman solo show, I have to come. There has to be a change. 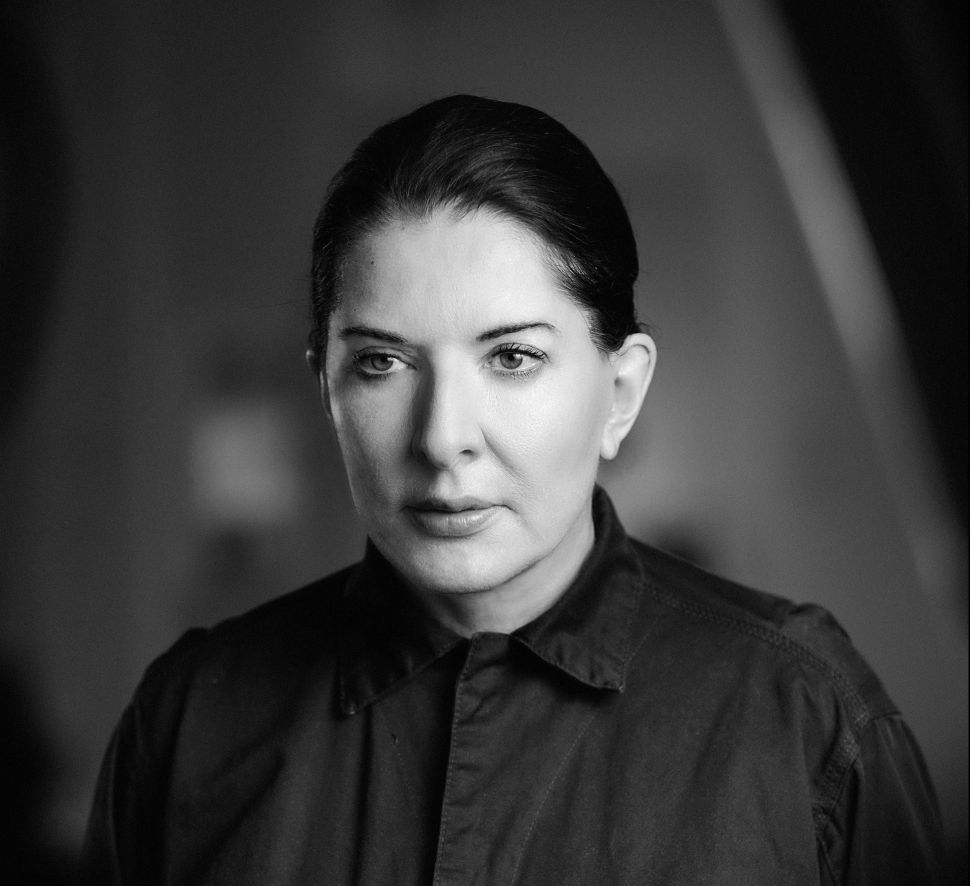