Belgium’s AfricaMuseum, in Tervuren, outside of Brussels, received a visit from the Democratic Republic of Congo’s Prime Minister, Jean-Michel Sama Lukonde, in February, just prior to the European Union-African Union (EU-AU) Summit. On his visit, Prime Minister Lukonde took part in a ceremony in which the Belgian Prime Minister, Alexander De Croo, handed over a list of 84,000 Congolese artifacts that had been held in Belgium since the colonial period. This list will be investigated and likely result in the restitution of many of those objects. Prime Minister Lukonde also toured the museum’s exhibit “Human Zoo. The age of colonial exhibitions,” which looks at the men, women, and children who were taken from the Congo during the colonial period in the 19th century, and put on display in Tervuren.

The AfricaMuseum, formerly the Royal Museum for Central Africa, was built by King Leopold II of Belgium, who ruled what was known as the Congo Free State, as his private possession from 1885 to 1908. Leopold enriched himself personally by allowing companies to extract resources from the Congo Basin, in particular rubber, through the forced labor of the native population. With no judicial oversight whatsoever, these companies laid siege to a vast swathe of resource rich territory, violently coercing the indigenous population to work. Those who refused to work were murdered or mutilated and their villages were destroyed. In 1890, the novelist Joseph Conrad described the brutality of the Congo Free State in The Congo Diary as “the vilest scramble for loot that ever disfigured the history of human conscience and geographical exploration.” Alongside disease, starvation, and a falling birth rate, the horrors visited on the Congolese people during this period resulted in a precipitous drop in their population—some estimates put it as high as 10 million people.

The Royal Museum for Central Africa originally displayed the colonial exploits of Leopold II. It holds racist statues of Africans who are depicted as violent and primitive, and a bronze statue of Black children clinging to a white missionary. In 1897, Leopold II had 267 people deported from the Congo and put on display at Tervuren, like zoo animals. Holding spears and wearing animal skins, they were made to pose outside model thatch huts and were gawped at by the millions who visited the exhibit. Seven of the people put on display died from pneumonia or influenza.

The colonial museum itself outlasted the Belgian colony, continuing on as an imperial museum for over half a century after the Democratic Republic of Congo won its independence. It was only in 2018, after a five-year closure, that the museum rebranded itself and reopened as the AfricaMuseum. Today, the museum comes to grips with Belgium’s racist history. The “Human Zoo” exhibit helps to reconstruct the museum as a space that centers African perspectives and African voices. General Director Guido Gryseels, is quoted in The New York Times, stating that the exhibit allows visitors to “look at our past, look it right in the eyes, and come to terms with it, and realize that we as an institute, as a museum, have contributed to the problems.”

Maarten Couttenier, one of the exhibit’s curators, told Observer that he believes that having the exhibit at the AfricaMuseum is of historical significance because it was on that site that people were put on display in zoos and where some died as a result of their treatment.

According to Couttenier, 19th century colonialists built the human zoo displays to showcase the backwardness of African people. “Their primitiveness highlighted the so-called civilization of Europe,” Couttenier told Observer. “It also legitimized colonization because if the other is primitive, then you need a white male to go over there to bring them to the light.”

The goal of the exhibit, according to Couttenier, is to provide an overview of the historical phenomenon of human zoos and to commemorate the people that died in the zoos in Belgium. Human zoos were a worldwide phenomenon in the 19th century—an age when circus impresarios like PT Barnum were raking in money by putting human beings on display. These exhibits had particular significance for colonial powers like Belgium, where Leopold II used them as propaganda to convince Belgians to invest in companies operating in the Congo Free State.

The process of restitution is a priority for the current AfricaMuseum, which holds more African cultural artifacts than any other institution in Belgium. The Belgian government, in a restitution process with the government of the Democratic Republic of Congo, has pledged to contribute 2 million Euros to researching and restoring the inventoried artifacts.

The restitution of cultural artifacts and the overhaul of a colonial museum are both indisputably positive developments. But for Belgium and other former colonial powers, the past isn’t over—it isn’t even past. The EU-AU Summit followed the ceremonial turning over of cultural artifacts to the Prime Minister of the DRC. At the summit, African leaders requested that European powers waive the patents for COVID-19 vaccines so African countries can manufacture generic vaccines themselves. Currently, less than 11% of Africans are fully vaccinated. In the Democratic Republic of Congo, one of the poorest countries in the world, that number goes down to less than 1%. Meanwhile in Belgium, a country which enriched itself on the resources of the Congo region for generations, 76% of the population is vaccinated. At last week’s summit, European leaders did not agree to a patent waiver, compelling African nations to continue to rely on the piecemeal charity of the global north.

The “Human Zoo” exhibit at Tervuren includes works of art by artists of African descent, such as “Already Said, Already Heard:” a wall display where micro-aggressions—everyday racist statements experienced by museum staff members—are printed in three languages. Statements such as “Wow, your English is really good,” “you don’t act like a normal Black person,” or “Africa has no civilization.” The exhibit implores us to understand that the racism that built human zoos is still with us today. Radio France International reported that before attending the summit, Prime Minister Lukonde was taken by the wall of micro-aggressions. He reportedly told a museum staff member that he recognized many of them. 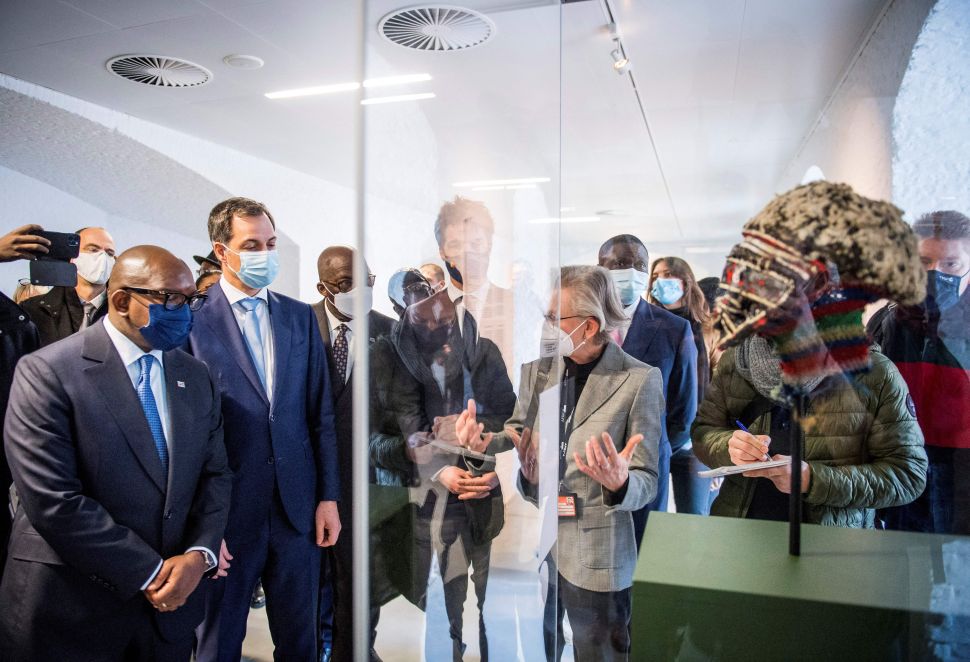