I was tempted to invite someone under thirty to Plaza Suite just for the blank expressions. Neil Simon! No? The Walter Matthau movie! Nothing? Sarah Jessica Parker! Yeah, that gal from Sex and the City  and the other thing I didn’t see. Broadway often makes me feel older than I am, and this substandard return of a very standard 1968 comedy is no exception.

Unless my imaginary millennial’s grandparents forced them to watch VHS tapes of The Odd Couple and The Goodbye Girl, the name Neil Simon probably means nothing to them. His last Broadway hit (Lost in Yonkers) was during the Clinton Administration; his first was under Kennedy. The Boomer Judd Apatow, Simon ruled comedy for decades, churning out massively popular plays, films, and books for musicals. Now we get a starry revival of the gag-stuffed Plaza Suite, three one-acts set in Room 719 at the titular grand hotel. Is it time to reappraise the father of all dad jokes, or heap scorn on his sitcommy oeuvre?

The first thing I should report about Plaza Suite is that Matthew Broderick is at peak Broderick. Theater people will understand this is not good news. It means that he’s delivering yet another bland, mousy smudge of a performance, squeaking his lines, looking like someone poured pudding in his loafers. His three characters were originated by George C. Scott on Broadway and later filmed by Matthau. Between those icons of comically stodgy masculinity, Broderick is a limp and wet puppy, framing everything in quotation marks and winks as if to say, I’m acting like I’m acting. His depressed, philandering businessman, his sleazy Hollywood player, his rage-prone father of the bride—none is remotely convincing or fleshed out. Well, the film producer is an ingratiating weasel, so that’s in the approximate universe.

Faced with this acting void, a.k.a. her husband, Parker gamely attempts pluck and passion as a series of unfulfilled wives and mothers. Her approach to each woman—a chattering, cheated-on wife, a bored, married New Jerseyite, and a neurotic mother of a bride who gets cold feet—is sweet and sympathetic but lacking comic verve and dignity. Anyone who has caught even a bit of SATC knows that Parker’s forte is the sensible, sensitive gal pal, not a quip-slinging suburban diva. (For a master class in how to balance pathos and wisecracks, Maureen Stapleton’s turn in the film is exemplary.)

For both actors, Plaza Suite ought to be a wonderful workout, a chance to show off versatility while nailing Simon’s well-crafted yuks. Instead, it feels like community theater for rich people, amateurish despite the deluxe sets and costumes (by John Lee Beatty and Jane Greenwood, respectively). When you leave Neil Simon feeling protective of his literary reputation, you know something’s gone terribly wrong. One example: In the first vignette, Sam confesses to Karen that he’s been having an affair with his secretary—on their wedding anniversary, no less. In shock, Karen offers to pour a cup of coffee:

Oh, come on, Karen, don’t play “Aren’t we civilized.” Call me a bastard. Throw the coffee at me.

You’re a bastard. You want cream and sugar?

Even a lousy actor could make that work: Holler the first sentence, then speak the second with benumbed politeness. Parker, maybe encouraged by director (but normally actor) John Benjamin Hickey into a misguided stab at realism, mutters both lines on the same level and gets a fraction of the laughs.

Cheap as the jokes about marriage, room service, and flaky children may be, the set-ups and punchlines deserve respect. How I longed for hungrier actors to strike sparks from this old playbook: If Paul Rudd and Melissa McCarthy had starred, we would have left thinking Neil Simon was the frigging Shakespeare of the marital zinger. Imagine a bad Burt Bacharach cover band. The tunes are retro fun; it goes nicely with a cocktail and a companion. But the piano player is all thumbs, and the singer is pitchy and weak.

Not that it matters to a general audience, desperate for even a pale ghost of levity after four years of Trump, two-plus years of pandemic, and a land war in Europe. They’ve paid money already convinced that Broderick is brilliant and has amazing romantic and comic chemistry with Parker. If those two sat there in pajamas and told knock-knock jokes for two hours, people would be rolling in the aisles. An average ticket price of $212.67 will make a person believe anything. It can turn a Best Western into the Four Seasons. 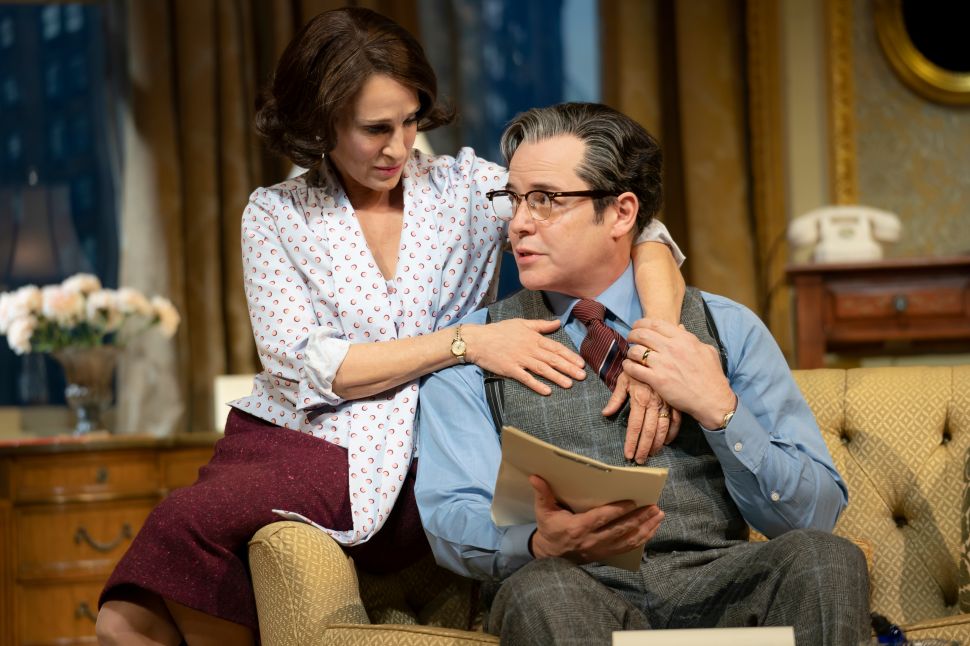