Russia is severing ties with its Western space partners in retaliation to a barrage of sanctions imposed against the country following its invasion of Ukraine. In the past week, Russia’s space agency, Roscosmos, has forced the cancellation or delay of multiple missions using its Soyuz rockets and said it would no longer sell rocket engines to American companies. The move is straining a decades-long international collaboration in space exploration and raises questions over what a global space community without Russia would look like.

Russia is a major player in the space industry. Its Soyuz launch vehicles, first developed in the 1960s, are among a handful of rockets capable of launching heavy payloads and humans to Earth’s orbit. For a decade, NASA relied solely on Soyuz rockets to regularly send astronauts to the International Space Station (ISS)—until switching to SpaceX’s Crew Dragon spacecraft in 2020. The European Space Agency still routinely uses Soyuz boosters for research and commercial missions.

Many American-built rockets rely on Russian parts. The United Launch Alliance’s Atlas V rocket, one of the most frequently employed boosters for NASA science missions, uses the Russian-made RD-180 engines. Northrop Grumman uses a newer version of the engine named RD-181 in its Antares rockets, which deliver supplies to the ISS for NASA.

“Let them fly on something else, their broomsticks. I don’t know what,” Dmitry Rogozin, chief of Roscosmos, said on Russian state television on March 3 when announcing the supply halt.

The decoupling started March 2, when satellite-broadband company OneWeb, partially owned by the British government, was preparing for its upcoming launch of 36 satellites on top of a Soyuz rocket in the Russian spaceport in Baikonur, Kazakhstan. Just as the Soyuz rolled out to the launch pad, Roscosmos announced it would not proceed with the mission unless the U.K. divested its 20 percent stake in OneWeb and the company guaranteed its satellites will not be used for military purposes. The next day, OneWeb’s board voted to cancel all missions from Baikonur and said it would start looking for alternative launch providers in the U.S., Japan and India.

OneWeb had launched about 400 satellites to low Earth orbit since 2019, all using Soyuz boosters. The company had aimed to complete its constellation of 648 satellites to provide global internet coverage before the end of 2022. Now, that timeline hinges on when it can find a new launch provider.

Also on March 2, Roscosmos withdrew more than 80 Russian personnel from Europe’s spaceport in French Guiana in South America, where the ESA has launched Soyuz-enabled missions since 2011. The ESA and Roscosmos had planned to launch a joint research mission to Mars later this year. After the personnel recall, ESA said the mission is now “very unlikely” to proceed on time.

The only place where cooperation hasn’t been completely cut off is on the ISS, which is co-run by the U.S., Russia,Europe, Canada and Japan. Russia controls critical aspects of the space station, including fuel delivery and its propulsion module, which keeps the orbital lab at a safe altitude away from Earth’s gravitational pull.

On Feb. 24, shortly after the White House announced a series of economic sanctions against Russia over its invasion of Ukraine, Rogozin threatened in a series of tweets to cut off cooperation with Western nations on the ISS, warning that, without Russia operating the propulsion system, the space station could eventually crash into Earth.

“If you block cooperation with us, who will save the ISS from an uncontrolled deorbit and fall into the United States or Europe?” Rogozin tweeted. “There is also the option of dropping a 500-ton structure to India and China. Do you want to threaten them with such a prospect? The ISS does not fly over Russia, so all the risks are yours. Are you ready for them?”

NASA has said it intends to continue cooperating with Russia on the ISS, which is currently occupied by four American astronauts, a German astronaut, and two Russian cosmonauts. The U.S. and Russia had been negotiating a deal to regularly transport Russian cosmonauts to the space station using SpaceX’s Crew Dragon launch system. The same spacecraft has been used to fly American astronauts to the ISS every six months since 2020.

“Despite the challenges here on Earth—and they are substantial—NASA is committed to the seven astronauts and cosmonauts onboard the International Space Station,” NASA Administrator Bill Nelson said during a meeting with the NASA Advisory Council on March 1.

His Russian counterpart responded grimly. “We will closely monitor the actions of our American partners and, if they continue to be hostile, we will return to the question of the existence of the International Space Station,” Rogozin said in a TV interview on March 2. “I would not like such a scenario, because I expect that the Americans will cool down.”

Who Will Russia’s Counter-Sanctions Hurt?

There is no sign of the U.S. cooling down its response to the Russian invasion, however. On March 3, the U.S. Treasury Department added eight more Russian individuals to its running sanction list. And the Biden Administration and its European allies are discussing banning oil imports from Russia, Secretary of State Antony Blinken said on Sunday.

While the situation on the ISS looks precarious, Russia’s measures on Earth to counter the sanctions will likely have little impact on American aerospace giants. A spokesperson for the United Launch Alliance said it has enough RD-180 engines in stock to meet existing launch demand. A Northrop Grumman executive said at a briefing last month that the company had all the hardware it needed to fulfill existing NASA contracts.

On the launch service side, “commercial demand for Russian launch vehicles has been waning consistently for the past 10 years,” said Caleb Henry, a senior analyst at Quilty Analytics, a Florida-based research firm specializing in the space industry.

“OneWeb is the largest commercial customer for Soyuz ever, not including NASA’s purchase of Soyuz for crewed ISS missions. Loss of the OneWeb contract would be the one that stings the most for Russia,” Henry added.

Overall, Russia’s market share in the global launch service sector has dwindled in recent years thanks to the rise of China’s space efforts (although still largely domestic) and American private space companies, primarily SpaceX. In 2021, Roscosmos launched 24 orbital missions (nine of which were OneWeb flights), or 17 percent of the global total, according to spaceflight records,down from 22 percent in 2016, the last year before SpaceX’s Falcon 9 became the most launched rocket in the U.S. In 2016, American and Chinese missions accounted for just half of the word’s total. By 2021, it was nearly three quarters. 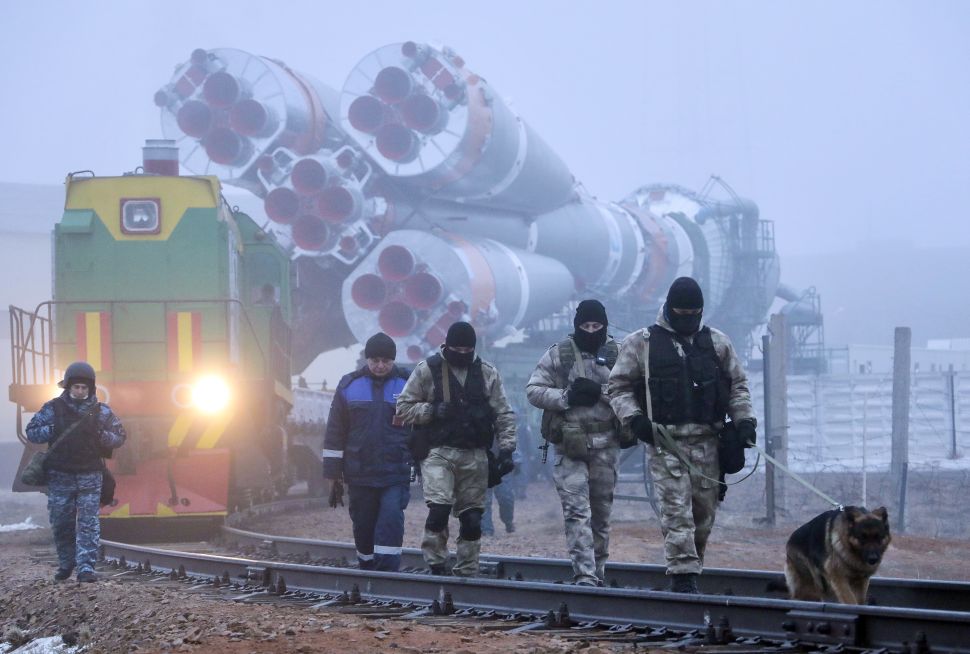