In a black box theater off of frigid 19th Street in Chelsea, a lone neon-drenched bar echoes with history. The glittering half-crescent saloon, on display at the performance arts venue the Kitchen through March, is the creation of the artist Sadie Barnette. The piece, titled The New Eagle Creek Saloon, is a tribute to her father Rodney’s shuttered bar of the same name, which was the first Black-owned gay bar to open in San Francisco. At The Kitchen, this reconstituted piece of history has itself been activated as a site of multiple convergent and overlapping historical archives, becoming in the process a place of both remembrance and imagination for a vanishing vision of New York.

For Barnette, the project began as a way to capture a particular essence that was at risk of being forgotten entirely. “I always knew that I wanted to create some archive around my dad’s bar,” she told Observer. “It wasn’t really something that was documented. It wasn’t in, like, Netflix documentaries, or Wikipedia pages, or something that grad students were studying. I felt like the name would be lost into the blur of history with so many unnamed and unknowable people and places who have contributed to queer histories.”

Despite being a memorial of sorts, Barnette’s Eagle Creek doesn’t function as a one-to-one recreation of her father’s bar, but rather as an evocation of the atmosphere and social attitudes that it fostered. The original Eagle Creek was a bastion for San Francisco’s Black queer community, and it provided everything from AIDS education, including a groundbreaking roleplaying arcade game called “The Interactive Multimedia Project — Brothers,” to support political organizing efforts and fundraisers for the community. Rodney Barnette was a founding member of the Black Panther’s Compton chapter, who had rubbed elbows with acolytes of the Black left such as Angela Davis and Malcolm X, and his decision to open the New Eagle Creek was a reaction to the outright hostility that many Black men felt at the predominantly white gay bars that dotted the Lower Haight and Mission District during the late 80s and early 90s. According to the younger Barnette, racist policing of Black nightlife by white bar owners was common, ranging from successive ID checks to selective dress codes and even going as far as removing Black music from jukeboxes. At the New Eagle Creek Saloon on Market Street, however, was a sanctuary, a place to organize and educate but also just to dance.

It’s that sparkling confluence of politics and joy that Barnette was most focused on conjuring in her reconstituted New Eagle Creek. The installation appears as a sort of idealized vision of a bar, its inviting glow a beacon in the dark of The Kitchen’s theater space, an appearance that Barnette compares variously to a “mirage,” “dream,” and “spaceship.” The candy paint countertops are strewn with old photographs and retro matchbooks, and there are zines scattered throughout with clippings from Bay Area newspapers and more archival photography. And then, of course, there’s the music. During weekdays, DJ sets are pumped in over the loudspeakers, while on Saturdays the records are spun live by a rotating cast of visiting DJs. In its original iteration, presented at the Lab in San Francisco in 2019, Barnette’s New Eagle Creek Saloon actually functioned as a bar, complete with drinks and a barkeep, although the COVID-19 pandemic put that aspect on pause.

The ephemeral, the intangible, the fleeting and almost gone: it’s these things that Barnette’s installation attempts to capture and turn into monuments in their own right. The photographs and printed matter give form to people and stories whose memory was in danger of vanishing, while the installation’s music and communal set-up turn the spark of barroom conversation into a performance in itself. In many ways, the work is an example of what the critic Nicolas Bourriaud deemed “relational aesthetics,” which saw artists as facilitators of social exchange rather than authors of discrete, definable works. But Barnette’s project of archive-building doesn’t end there. During the work’s original San Francisco run, the artist invited patrons of the original New Eagle Creek to speak on their time spent there and share the stories they’ve accumulated over the years. In New York, this component has morphed into a far-reaching series of nightlife residencies, which activate Barnette’s installation through live performances and talks every Saturday. At these ”Saturday sessions,” the New Eagle Creek’s potential as a site of historical reanimation is most fully realized.

The monthlong series of live events was curated by the performer and theorist madison moore, who selected DJs and performers with strong ties to queer nightlife culture across the U.S. The guiding principle for these sessions, according to moore, was to focus on the various modes of what they call queer worldmaking. “When I was thinking about people to program in, I was trying to build a broader sonic sampling of the queer sonic community, representing different genres, different geographies, demographics,” moore told Observer. “Histories as well, thinking about generational traces. I think we don’t talk a lot about intergenerational connections in the queer community, and I think those are very important.”

In practice, this has resulted in the New Eagle Creek playing host to nightlife lineages from across the country, ranging from Chicago house music to New York ball culture. In mid-February, the installation was taken over by performers from the legendary New York ballroom group House of Aviance. In between DJ sets and strutting walks, the members of the house held court in the crowded theater, regaling attendees with stories of their New York and their Chelsea, a place of booming music and towering looks and, unsurprisingly, the same sort of multivalent community that the original New Eagle Creek Saloon would similarly foment. Seated at the front of the glittering bar, Nita Aviance told the crowd how Chelsea’s relative ease of access from the outer boroughs and Jersey made it a central hub for a community of people otherwise priced out of the island. In a Chelsea that today gleams with luxury developments and mega-galleries, this story of place and time carried with it a rind of sorrow.

That painful rind of a paved-over past is the project of the New Eagle Creek Saloon, but so is the music that thrummed through the space before and afterwards. Joy and remembrance are stitched together into one holographic object, which can be used as an avatar for one place or for many. “People walk into the space, and they bring all of the bars that are special to them into that space,” Barnette said. “They’re at once paying homage to the Eagle Creek, or just saying the name of the Eagle Creek, which is important, but also, it’s all of these other spaces and memories that people bring with them.” And while “mirage” and “spaceship” seem apt enough descriptors of the New Eagle Creek Saloon, Barnette often makes use of another one: time machine. “You’re actually time traveling and having this temporal wrinkle between then and now and the future of queer spaces.” 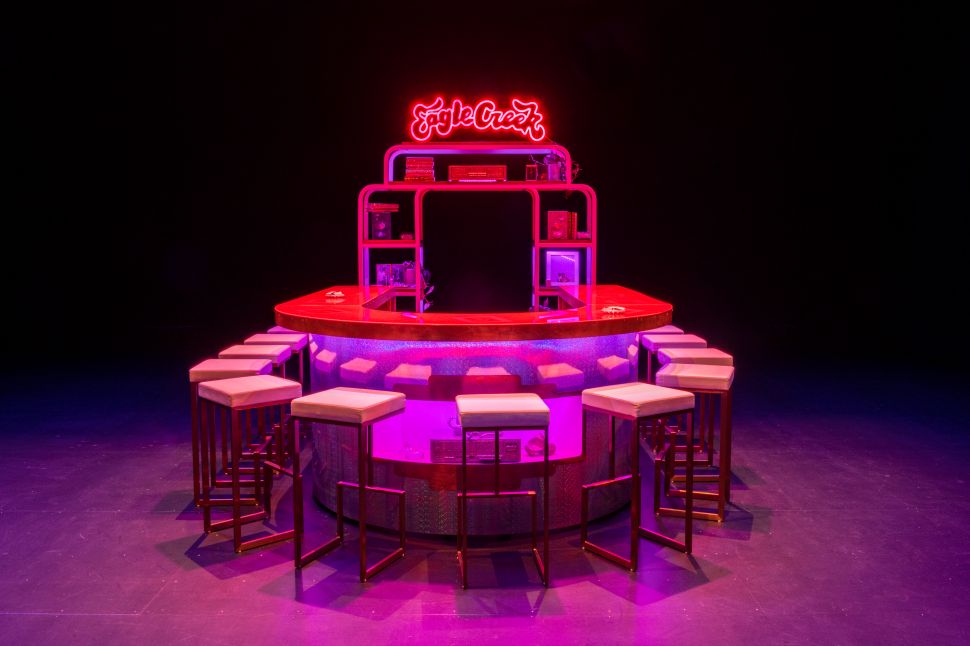