In 2020, Sir Patrick Stewart returned to the role that made him a household name in the new series Star Trek: Picard. In its first season, retired Admiral Jean-Luc Picard finds a new purpose and a new crew, facing down his regret over his personal and professional failings and defending the principles of the United Federation of Planets. While a bit lacking in focus and thematic cohesion, the show boldly experimented with Star Trek as a form, separating its characters from the comfortable trappings and routines of Starfleet and delving deeper into the emotional life of its beloved lead character. The Season Two premiere, “The Star Gazer,” reinvents Star Trek: Picard as a less ponderous and more propulsive series, providing a clean jumping on point for new viewers that picks up the pace of the action and doubles down on its investigation into Jean-Luc Picard’s psyche.

“The Star Gazer” sets up three seemingly unrelated mysteries that will surely connect over the course of the ten-episode season. First, Picard struggles with the riddle of his own heart after declining the romantic advances of his longtime friend and housekeeper Laris (Orla Brady). At the age of 96, Picard still suffers from a deep fear of intimacy and sabotages any relationship that might become serious. Both Laris and Picard’s confidant Guinan (Whoopi Goldberg) wonder aloud whether his life among the stars might have been less about exploring the galaxy and more about running as far away from home as possible. This triggers a boyhood memory for Picard that, while we only see it in flashes, strongly implies that his mother Yvette (Madeline Wise) suffered abuse at the hands of his father.

Throughout Star Trek: The Next Generation we learned quite a bit about Jean-Luc’s relationship with his stubborn, traditional father, Maurice, but next to nothing about his mother. While I‘m keen on the idea of spending some time with Yvette as a character this season, I’m far less excited by the prospect of introducing her purely to victimize her. Picard’s fear of intimacy stemming from growing up in the shadow of domestic abuse would be a tired cliché, especially after seven years on TNG exploring it as a byproduct of his tireless careerism. But more than that, the idea that there are still men on Earth who beat their wives in the 24th century would be a stunning betrayal of Star Trek’s utopian future. I hope very much that this is a misdirection.

Of the legacy characters who could have appeared in this episode as foils for Picard’s introspection, Guinan is the most logical and economical choice, as she has a deep bond with Picard but no baggage of her own. You don’t have to explain what she’s been up to for the past 20 years; she used to run a bar in space, now she runs a bar on Earth. As for the prospective romance between Picard and Laris, it almost doesn’t matter. It’s not this specific relationship we’re rooting for, it’s the idea of any relationship at all. As in last season, Patrick Stewart brings a new dimension to his well-worn character, whose years in retirement have made him a bit more relaxed and playful but still inhibited by old habits. Orla Brady has the harder job here, given all of six minutes to convince the audience that she’s a match for a character that many viewers have known for their entire lives. This requires that she lay it on pretty thick, but considering this is like a speed dating audition to be the audience’s stepmom, it’s a pretty fair effort.

The second mystery is set in space, catching us up with the gang from last season, who (aside from Picard) each get a new-viewer-friendly reintroduction. In the year and a half since we last saw them, most of La Sirena’s motley crew has gone back to work: Admiral Picard is not only a vintner, but has also returned to the service and is taking over as Commandant of Starfleet Academy. Cigar-chomping Captain Cristóbal Rios (Santiago Cabrera) and conspiracy theorist Commander Raffi Musiker (Michelle Hurd) have both returned to Starfleet, and Elnor (Evan Evagora), the warrior nun who Picard mentored as a child, has become the Academy’s first fully Romulan cadet. Raffi and Seven of Nine, whose romantic relationship blossomed entirely offscreen at the end of Season One, are now separated as Seven (Jeri Ryan) continues her efforts as a heroic space cowgirl with the Fenris Rangers. Her characterization here splits the difference between her more “human” portrayal in the first season and her restrained deadpan from Star Trek: Voyager. Rios and neurotic genius Dr. Agnes Jurati (Alison Pill) have also broken up but are still working together, and Soji Asha (Isa Briones) is on a goodwill tour of the galaxy on behalf of her fellow descendants of the android Data.

Rios’ ship, the new USS Stargazer, is summoned to the site of a spooky green tear in space-time. From the other side of the rift, a thousand voices cry out for help in unison, lodging a petition to join the Federation and demanding to negotiate with Admiral Picard. When Picard arrives, the petitioners reveal themselves as the Borg, the Federation’s deadly enemy with whom Picard and Seven of Nine have a particularly tormented history. The Borg have been significantly defanged since their defeat in the finale of Star Trek: Voyager and Picard is willing to entertain the idea of peace talks, until their queen beams herself aboard the Stargazer and starts assimilating the ship. The queen seen in this episode is a puzzle unto herself, shrouded head to toe in black and returning the security team’s phaser fire with non-lethal blasts. Might the queen’s plea for peace be genuine after all? A storyteller doesn’t hide a character’s face unless revealing it would have meaning, and announced Borg Queen actor Annie Wersching is not credited in this episode; there’s good reason to expect a swerve up ahead. Rather than risk the queen assimilating the entire fleet, Picard activates the Stargazer’s self-destruct. Before the countdown reaches zero, the Queen startles Picard by repeating a favorite phrase of his mother’s: “Look up.”

We only get a brief glimpse at Mystery #3, as Picard wakes up after the fiery blast and finds himself in an alternate version of his home in France, which is now a museum of weapons and war. On the wall hangs a portrait of his younger self standing in the flaming ruins of a conquered land, indicating that this is some fascist nightmare akin to (but distinct from) the Mirror Universe. Then, the nightmare turns immediately worse as he’s visited by his old nemesis, the omnipotent cosmic trickster Q (John de Lancie), who implies that they’re to embark on yet another test in humanity’s neverending cosmic trial. Q’s presence in this season has been well-advertised, and while I have my doubts that any story that has God as an antagonist can hold its shape for ten hours, I’m excited to see how John de Lance tempers his hammy character for Picard’s more grounded tone.

And it’s the tone that feels most different from last season, stated boldly towards the start of the episode in a new, more intense and ominous arrangement of Jeff Russo’s opening theme. I count Picard’s original theme as one of my favorites in the franchise, not only for its beautiful repurposing of a lullaby from The Next Generation’s “The Inner Light” but for what it represented for the series: that Picard would be a different sort of Star Trek show. While I don’t feel that the show’s first season was entirely successful, I value the attempt to uniquify each new iteration of the franchise. As an individual episode, “The Star Gazer” is far and away the most fun chapter of the series so far, but we also already have three other “fun” Star Trek shows currently running in Discovery, Lower Decks, and Prodigy. I’ll never turn down a good time, but I hope that the desire to inject more sensationalism into this series doesn’t overwhelm its contemplative spirit. 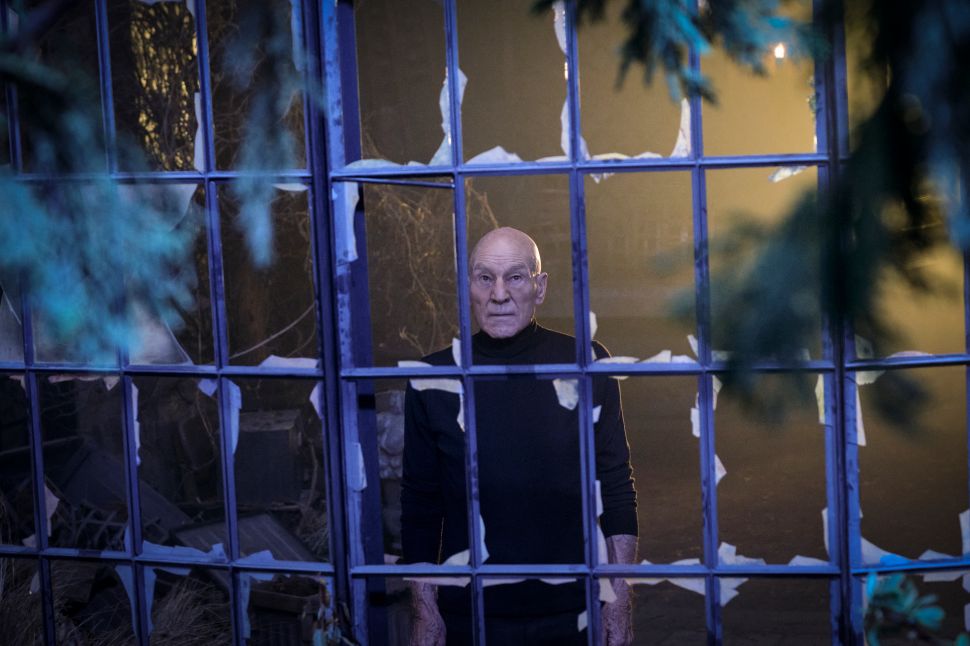