This week’s Star Trek: Picard indulges in one of the franchise’s favorite tropes — the dark parallel universe — and delivers the most heightened, borderline silly episode of the series to date. “Penance” establishes the stakes for the season’s story arc, but it remains to be seen how any of this adventure in spacetime will relate to the emotional themes set up in the premiere.

We pick up where “The Star Gazer” left us, as Picard finds himself on an alternate, fascist Earth with his old adversary Q (John de Lancie). In this reality, Picard is a genocidal conquering General of the Confederation of Earth, and has personally executed dozens of alien leaders (such as Deep Space Nine’s Dukat and Martok and Spock’s father, Sarek). But he’s shaken not only by the revelations about this parallel world, but by Q’s uncharacteristic displays of anger, instability and perhaps even disorientation. Nearly three decades apart have done nothing to diminish the chemistry between de Lancie and Patrick Stewart, who hide kernels of their characters’ concern for one another in their verbal sparring, but there’s also a new layer of intensity to their performances. We last saw Picard and Q together in the series finale of The Next Generation, when they parted on good terms; here Q goes so far as to strike Picard across the face, drawing blood.

Picard assumes that he has found himself in a nightmare of Q’s making, but Q holds Picard responsible for this broken world, claiming it’s a reflection of Picard’s fear, the result of some failure we don’t yet fully understand. Picard might, though — when he asks Q what he needs to atone for, Q replies, “I think you know,” and Picard falls silent, breaking eye contact. Might this have something to do with the flashback to Picard’s childhood that we glimpsed last week? Or with the Stargazer’s disastrous confrontation with the Borg? Or, even, somehow, to Picard’s emotional barriers? It seems we’ll have to wait a while longer for an answer.

True to his usual m.o., Q has provided Picard with some help to set things right. The rest of his gang (save for Soji, who is conspicuously absent) has also retained their memories of their previous lives. Seven of Nine finds that she is now President Annika Hansen, a version of herself who was never assimilated by the Borg and is married to a man she knows only by his title, “Magistrate” (Jon Jon Briones). Rios is back in command of La Sirena and leading the charge in the Confederacy’s war against Vulcan. Elnor is a member of a rebel band who narrowly avoids execution thanks to Raffi, herself a high-ranking intelligence officer. Dr. Jurati discovers that her life is not much different, as she’s a lonely lab rat whose only companion is a cartoon cat AI she programmed herself (voiced by Patton Oswalt). One by one, the crew reassembles in San Francisco, the site of the Confederacy’s annual Eradication Day ceremony where Seven and Picard are expected to execute the Borg Queen (Annie Wersching) in front of a live audience. This Borg Queen is of a more familiar variety than the one seen in last episode; I’ll dive more into her characterization and Wersching’s performance in next week’s review.

Star Trek has a long tradition of introducing nasty, warlike counterparts of our characters and their idyllic United Federation of Planets. The Mirror Universe and its tyrannical Terran Empire have allowed the casts of The Original Series, Deep Space Nine, Enterprise, and Discovery the opportunity to ham it up as piratical or vampiric “evil twins,” to varying levels of success. Discovery, produced in the 2010s and ‘20s in the shadow of rising American fascism, has taken a far less campy approach to the Mirror Universe, suggesting (correctly) that there isn’t anything fun about a ruthless xenophobic empire ruling the galaxy through fear. Though specifically not the Mirror Universe, the Confederation of Earth is essentially the same idea, positing that humanity could have easily become the villains had they given into hate and fear rather than embracing diversity and peaceful exploration. “Penance” similarly highlights the cruelty of this timeline rather than milking comically evil versions of familiar characters for cute gags. The episode’s most powerful moment is when Seven, reading a militaristic speech written for her counterpart, reluctantly forces her way through the word “resistance.”

Nevertheless, the tone of the episode is never permitted to become too grim. There’s some fish-out-of- humor, as Seven attempts to hide that she doesn’t know her husband’s name. Raffi, who resents taking a backseat to Seven’s work in their own timeline, makes a few cracks about President Hansen’s marriage. Most of Elnor’s lines (of which he has very few) are jokes at the expense of his honesty and youthful enthusiasm. Both the best and worst gags of the episode belong to Dr. Jurati, who is in full Joss Whedon Motormouth Mode. Alison Pill is genuinely very good at delivering Jurati’s goofy, wordy, self-deprecating monologues, but “Penance” relies far too heavily on lazy “well, that just happened” humor, almost always from her character’s mouth. There’s also a squabble between former couple Jurati and Rios in the middle of the climax, and Rios calling out that this is not the time for such an argument doesn’t make it any less out of place.

Similarities to the Mirror Universe aside, our heroes soon learn that this is not an alternate universe but their own corrupted timeline. Via her transdimensional awareness, the Borg Queen surmises that this reality is the result of a single change to history, presumably made by Q in Los Angeles in the year 2024. The Confederacy has no time travel technology, so Picard and company plan to jump to the past the old-fashioned way, using the slingshot maneuver perfected by Kirk and Spock in The Original Series and The Voyage Home. Since they don’t have a genius Vulcan at their disposal, they’ll have no choice but to bring the Borg Queen with them to make the necessary calculations for the trip. This means rescuing her from execution and escaping together to La Sirena before Seven’s guards realize that they’re not who they appear to be. Disabling the facility’s defenses takes longer than expected, and La Sirena is pursued and boarded by the Magistrate. Elnor takes a gnarly-looking disruptor blast, and the rest of the party is held at gunpoint as the episode comes to a close.

It’s difficult to judge the shape of any story from the first few chapters, and that goes double for a story involving time travel. We can only assume that the themes and questions introduced last week in the prime timeline somehow relate to the disastrous future seen in this one, and that we will eventually understand Q’s intervention and how it connects to Picard’s personal baggage. So far, though, it’s a lot to chew on, as we have now been introduced to two settings in spacetime and been promised that the real plot will take place in a third. The mysteries are still piling up, and our only hint as to the nature of the true flashpoint of the story is a talking statue seen in the dark timeline’s San Francisco Bay of Adam Soong (Brent Spiner), yet another identical ancestor of Data’s who we will presumably meet in the 21st century. Once we get there, the story will no doubt balloon to incorporate more characters and subplots, each with their own questions to answer. With any luck, everything we’ve seen so far is part of a complex domino rally. For the time being, we’re just along for the ride, and fortunately the ride is pretty entertaining. 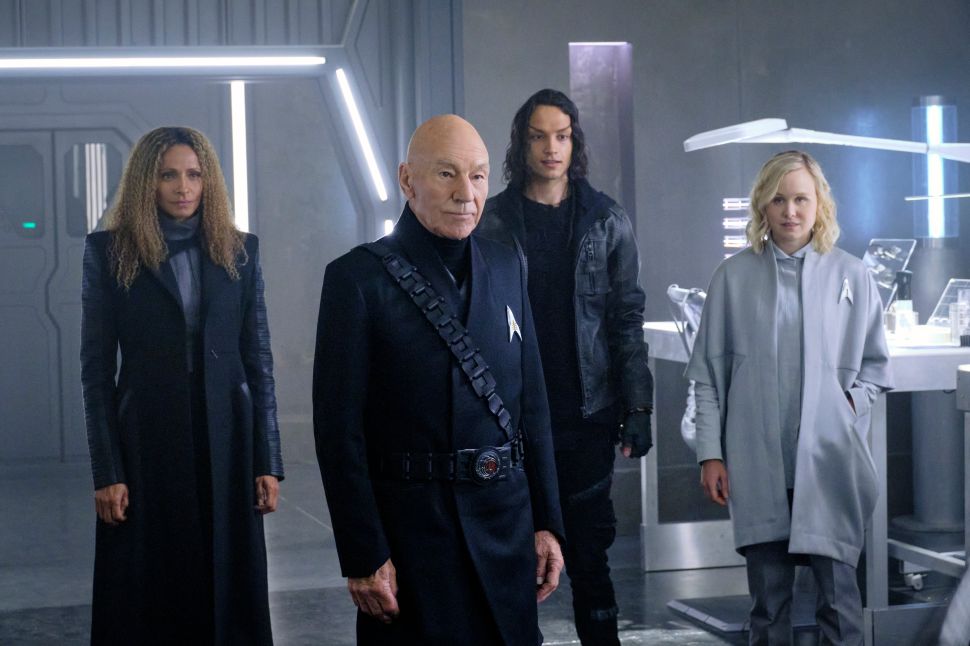