After two hours of prologue, Season 2 of Star Trek: Picard finally crash-lands in its advertised setting of 2024 Los Angeles. Dropping Starfleet’s finest into a present day setting to comment on our contemporary problems is a tradition dating back to The Original Series (see: “Tomorrow is Yesterday”) and codified in 1986 with the mainstream success of Star Trek IV: The Voyage Home. This week’s episode, “Assimilation,” dives headlong into critiquing modern America, but is hobbled by the hasty disposal of one of its main characters and another in a long line of embarrassing failures for Star Trek’s ultimate paper tiger, the Borg Queen.

The episode picks up in the alternate 2401 explored in last week’s chapter, with La Sirena on the run from the evil Confederation of Earth. Elnor (Evan Evagora) has been shot and is bleeding out, but Seven (Jeri Ryan), Rios (Santiago Rivera), and Raffi (Michelle Hurd manage to quickly turn the tables on the Confederate boarding party and vaporize them with their own weapons. (How Elnor ended up with a hole in his chest rather than his atoms scattered is something we’re not meant to think about.) Raffi hurries Elnor to the medical bay for treatment, but it’s no use — their unlikely ally, the Borg Queen (Annie Wersching) diverts the ship’s power to complete and then recover from their leap into the past. La Sirena makes a controlled crash landing in 2024 France, and Elnor dies on the operating table. A distraught Raffi pins her hopes on their mission to repair the timeline, but Dr. Jurati (Alison Pill) can’t promise that preventing the temporal divergence will also undo Elnor’s death.

As disappointed as I am that the storytellers have apparently written Elnor out of the rest of the season, I am hardly surprised. When Elnor was introduced early in Picard’s first season, he had the potential to be the thematic center of the story, the personification of Jean-Luc’s personal and professional failures. Here’s a kid who Picard takes under his wing and then abandons for a decade after Starfleet cancels his mission to resettle Romulan refugees. When Picard seeks help from an adult Elnor, Elnor is willing but also wounded, and his code of “absolute candor” means wearing his disappointment on his sleeve. However, beyond his debut, the writers seemed to have no idea what to do with him. He and Picard have few meaningful interactions for the rest of the season, and his position as the party’s heavy hitter was immediately usurped by Seven of Nine, upon whom he seems to imprint as a new mentor. By the opening of the second season, he has become Raffi’s student, apparently so that she can be properly devastated when he’s tossed in the fridge after contributing nothing to the story.

More than that, though, taking Elnor off the board feels like a matter of convenience. Our story is set in 21st century LA, and he’s an extraterrestrial who doesn’t know how to lie. You could disguise him with the old “bandana over the ears” trick a la Spock or Tuvok, but his honesty would still be a hurdle to be addressed. Rather than make something out of that hurdle, either dramatic (imagine Elnor struggling with the constraints of his code in the face of galactic-level stakes) or comedic (imagine him doing semantic gymnastics to avoid lying outright about his nature), they just kill him, because that’s easier. Yes, it heightens the stakes for Raffi and puts her in conflict with Picard, who barely bats an eye at his erstwhile mentee’s death, but the best efforts of Michelle Hurd and director Lea Thompson (yes, that Lea Thompson) can’t lend gravity to the death of a character that the show doesn’t care about. It reads as lazy, especially since I fully expect that the time travel escapades will end with the entire crew returned to the site of the Borg anomaly, Elnor included.

With no time to mourn, Raffi, Seven, and Rios beam to LA in search of the “watcher,” an unknown individual who the Borg Queen claims can pinpoint when and where the calamitous change in the timeline will take place. The Queen passes out after the time jump and enters some sort of maintenance mode, and without her help the away team is forced to search for signs of an anachronistic presence in LA. The plan is to climb to the highest point in the city (which the characters keep referring to as “Markridge Tower” for some reason?) and conduct some scans, but teleporting halfway across the world when your ship is a wreck turns out to be a dangerous prospect. Raffi and Seven arrive separately, blocks away from the tower, and Rios materializes twenty feet in the air, slams his head on a fire escape, and is carted off to a nearby urgent care facility.

The Voyage Home-style material is the episode’s best, wasting no time in showing us how our culture’s current path could easily lead to the hellish future of the Confederation. Star Trek IV’s concerns about 1980s Earth feel almost quaint compared to what our heroes face in a modern California that is constantly on fire. Raffi remarks upon the staggering contrast between the splendor of an upcoming mission to Europa and the squalor of LA’s unhoused population. (Eagle-eyed viewers will see flyers referring to the “Sanctuary Districts” grimly predicted by the Deep Space Nine two-parter “Past Tense.”) Seven of Nine is taken aback by the warmth with which she’s greeted by strangers here, without her Borg implants or anti-Borg prejudice making her an instant pariah. We can also infer that she’s enjoying the privilege of being a pretty white lady in Los Angeles, in contrast to her biracial and Latino comrades. (This, too, was a big part of the subtext of “Past Tense.”)

But nothing hits the nail more directly on the head than the introduction of the story’s 21st century antagonists, none other than US Immigration Customs and Enforcement. When Rios is wounded, a good samaritan brings him to a clinic that offers low-cost, no-questions-asked medical care. There, he’s patched up by Teresa (Sol Rodríguez), the charming and witty doctor who runs the place. Every “Voyage Home” employs a character from the present day who becomes an ally to our timelost heroes, usually someone with values that align with the Star Trek future, and Teresa fits the bill nicely. Rodriguez and Santiago Cabrera also have instant romantic chemistry, the likes of which Cabrera and Alison Pill didn’t really share last season. When Teresa’s facility is threatened by an ICE raid, Rios tries to help and inadvertently makes it worse, getting them both arrested. Positioning ICE as both a minor villain in the season and a portent of humanity’s future as the xenophobic fascists of the galaxy is uncharacteristically bold of modern Trek. Despite putting their best foot forward in terms of representation (see Discovery’s racial and gender diversity), none of the current shows have been much for radical political statements, and this is a welcome example of Trek honoring its roots as a progressive institution.

Unfortunately, “Assimilation” also partakes in another, albeit younger, Trek tradition: Making the Borg Queen look like a chump. Introduced in the 1996 feature Star Trek: First Contact as a way of giving the Borg a villainous figurehead, the Queen also provides the otherwise unstoppable cybernetic force of nature with a single, very exploitable point of failure. In short, she exists to get punk’d, and her multiple defeats on Voyager reduced the Borg from Trek’s best baddie to just another Alien of the Week. In this episode, Dr. Jurati deliberately connects her mind to the hibernating Queen’s in order to assist her recovery from the tiring time travel effort, and not only avoids getting assimilated in the process but tricks her into revealing what she knows about the watcher. Even though the conditions are unusual and Jurati’s brilliance has been well-established, this is still a hell of a way to treat a character who represents the most terrifying force in the galaxy. Resistance has never been less futile.

That said, I like Annie Wersching’s flippant, condescending take on the Queen. Alice Krige played her as a seductress in First Contact, Susanna Thompson as an abusive mother on Voyager; Wersching’s Queen is a bully, befitting her role as a foil to the insecure Agnes Jurati. I like her new look, courtesy of James MacKinnon’s makeup department, which pushes her even further into H.R. Giger territory. But, if I may make a prediction, I don’t think Wersching’s Borg Queen is built to last. The face underneath the mask of the 25th century Queen is bound to belong to someone else, and right now the smart money’s on Agnes Jurati. But a lot can happen in seven weeks; Let’s see what’s out there. 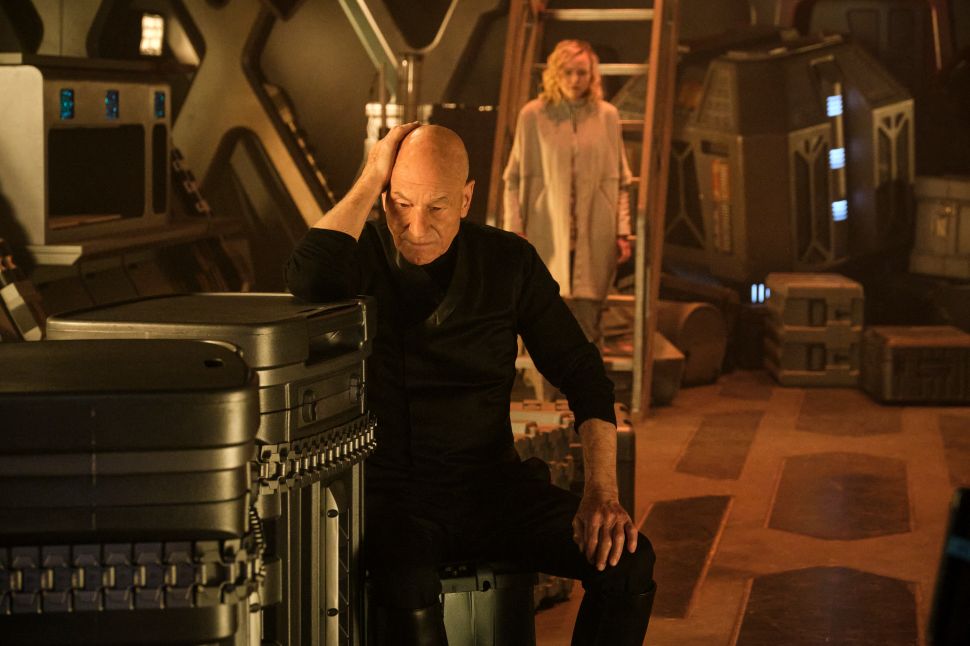