In post-World War II Japan, members of the avant-garde Gutai Art Association believed materials had a life and personality of their own, just as much  as the artists that used them, and often gave them top billing in their pieces and performances. Kazuo Shiraga flung his body in mud while simultaneously sculpting shapes from it. Jirõ Yoshihara erected a giant blank board in a park in the city of Ashiya and invited anyone who wanted to draw on it. Takesada Matsutani turned his attention to vinyl glue. “Combine,” his first New York exhibit since 2015, is on view at Hauser & Wirth through April 2. Usually the essential but unsexy connector between other materials, he gives vinyl glue a starring role in works that straddle the line between painting and sculpture.

Matsutani first applies the glue to canvas, like dripping paint, before drying it with fans, hair dryers, or sometimes his own breath, giving it a gestural quality, as if he literally breathed new life into an inanimate material. He adds acrylic paint, often black and blue, but this show includes two pieces with yellow and white, as in Circle Yellow-19 (2019), a thick yellow circle with a white crescent moon at the bottom, and Point de Contact, which look like two smashed eggs.

The process and the novelty of the glue’s transformation could threaten to wear thin, even in a small exhibit. There’s an excitement in reimagining pedestrian materials, but I wondered if the works themselves could stand on their own without knowledge of the process that made them. Fortunately the results of that process showcase Matsutani’s ability to seamlessly blur the barriers between playful and sensual. The glue pieces are reminiscent of both balloon animals growing out of a canvass, and bodies, especially hips and breasts.

On a Slope (2021) features two black and blue globes protruding from the canvas, one pointing right and the other straight ahead, with a sharp line in between them. It’s cleavage in both of its meanings, both breasts and a break. The dried glue forms a skin on top, just separated enough from the canvas that I wanted to peel it off like a sunburn, repulsive and alluring.

Suiun 2021-2-12 (2021) has a similarly bulbous shape; it reminded me of a black and blue version of Zoe Buckman’s 2018 Champ, two glowing neon ovaries wearing boxing gloves. In both On a Slope and Respiration 21-10 (2021), there’s a line through the top, a severance that reverberates across “Combine.” In Respiration 21-10, which looks more like the heart muscle rather than the reproductive organs of some of the other works, the division is straightforwardly representational, two chambers of the heart. For the others, the lines suggested a conflict, a small element of sharpness, complicating the sensuality of the otherwise round shapes.

Also included are a few abstract works like Circle-21.6 (2021) and Triangle 21-1-2021 (2021) These canvases mold to the shape of their subjects, and function as a visual palate if not a palette cleanser. The colors remain mostly black and blue. Still, there’s a satisfying unity in having the subjects of the painting be the same shape as their canvass stage.

My favorite piece however, did not involve glue at all. Stream-Ashiya-92 (1992) is a Rapunzel-like scroll tumbling down from Hauser & Wirth’s skylight. It’s composed of layered marks in metallic black graphite, Matsutani’s record of repeated gestures over time. Seeing it felt like receiving a divine proclamation in the middle of a gallery. The scroll is wordless, but the sheer scale and layers of marks imply wisdom anyway, if only I could decode it.

The exhibit as a whole is a similarly brilliant record, a concise encapsulation of a six decade career that manages to pull together multiple examples of Matsutani’s style.

On view at Hauser & Wirth until April 2. 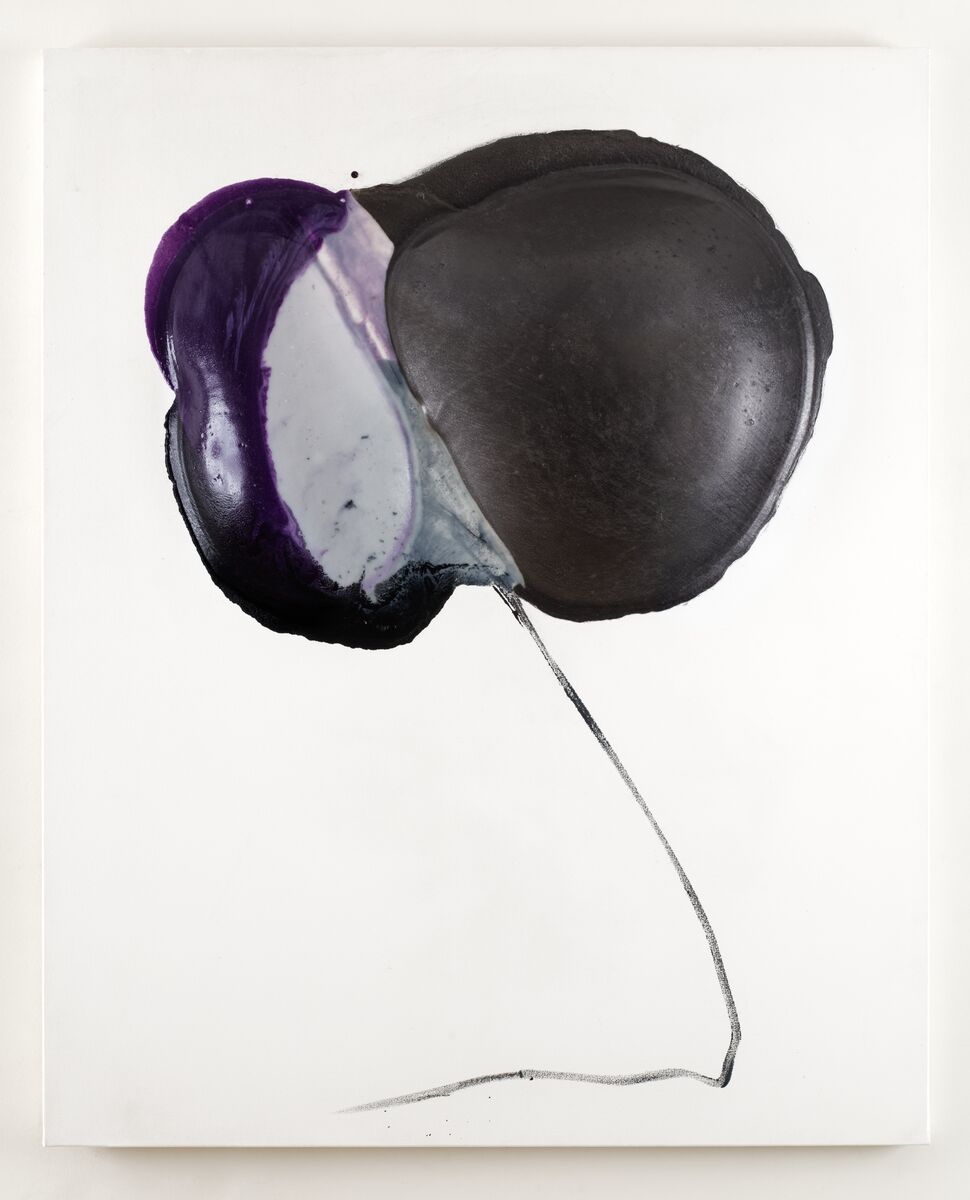