At The Chinese Lady, audiences first confront a corrugated-steel, stage-spanning wall that reads: CHINA SHIPPING. The doors to this looming simulation of a cargo container (designed by Junghyun Georgia Lee) swing open. What greets us takes a bit of unpacking, too. It’s the title lady, Afong Moy (Shannon Tyo), seated in a re-creation of an eastern style room decorated with flowers, lacquered tables, and vases. The preternaturally poised young woman is clad in traditional robes, with heavy white foundation, red lips, and rose eye shadow.

That sense of being invited in and then excluded—both for immigrant and spectator—is one of the more potent motifs in Lloyd Suh’s resonant and effective play. The 2018 two-hander (remounted by Ma-Yi Theater Company and the Public) is based on the true story of Moy, the first recorded Chinese woman to visit America in 1834, brought over from Guangzhou Province by brother traders Nathaniel and Frederick Carne. Moy, then fourteen, was exhibited in her ersatz habitat first in New York and then in tours across the country. She would demonstrate the tea ceremony, eat with chopsticks, and walk around the room to show her four-inch “little feet,” the result of foot binding. Eventually, P.T. Barnum brought her act into his roster of exotic sideshows. Little is known of Moy’s life after the 1850s, and Suh uses that biographical lacuna to give his protagonist a fantastically extended life—up to the present day.

The 90-minute drama charts Moy’s journey in America from hopeful teen to jaded adult, a progression shadowed by American attitudes toward Chinese immigrants—ranging from Orientalist condescension to murderous bigotry. Along the way, Suh’s play acquaints us with some of 19th-century America’s most heinous crimes against Chinese immigrants, such as the 1885 torture-killings in Sweetwater County, Wyoming, or the Snake River massacre two years later in Oregon. These history lessons serve to remind us that the anti-Asian violence we see going on every day—especially during the pandemic—has deep roots in American soil.

While The Chinese Lady touches on tragedy, the overall mode is wry and comic. It unfolds as a series of tense but humorous interactions between Moy and her translator/handler, the gently mocking Atung (Daniel K. Isaac). Atung is a placid factotum whose serene exterior masks chaotic depths and lifelong disappointment. There’s a hint of Beckett’s Endgame in the prickly master-servant rapport between Moy and Atung, the latter constantly moving tables and props around the physically restricted star attraction, drawling campy asides à la Tim Gunn. As in the recent transcultural play English, characters code switch to indicate when they’re speaking English with an accent or their own tongue. Or, in Moy’s case, her inner monologue.

While Tyo carries the bulk of the play with consummate grace and charisma—growing older and wiser before our eyes—Isaac is a mysterious presence, the true sealed container. In a sensuous, soul-baring monologue late in the story, Atung shares his charged, erotic dreams with us, aggressive, pansexual fantasies of dominating the white men and women who come to gawk at Moy. Most of all, Atung confides, he desires the physical act of love with Moy, “because it is most forbidden,” he explains. “She is like a wisp, a memory, an idea, a poem.” One senses Suh’s authorial voice in this bracing, vivid passage, the writer wanting to possess his subject, yet knowing she’ll always elude him.

Matching Suh’s delicate blend of dry wit and poetic melancholy, director Ralph B. Peña crafts a lucid and vibrant production around the two magnetic central performances. The Chinese Lady is ultimately a sincere mediation on the act of looking as a way to know something or someone, to break through ethnic clichés or blinding prejudice. It makes you wonder—hope—that even in the bad old days of 1834, some American looking hard at this foreign girl in a strange land could see a bit of themselves. 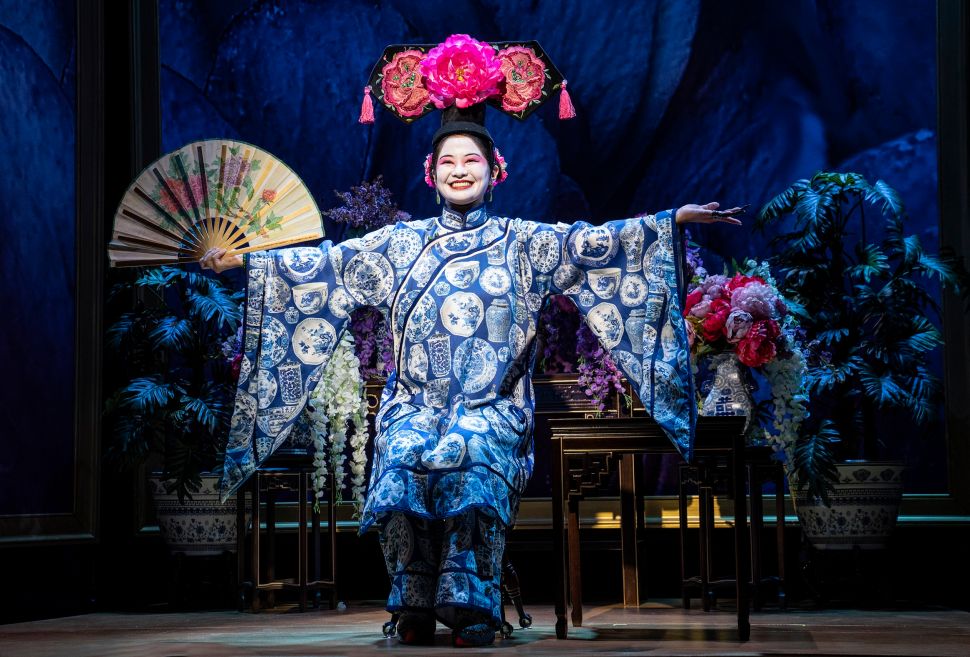