Watching The Lost City is the cinematic equivalent of slogging your way through monkey poop.   I squirm and moan my way through stinkers all the time, but I can’t actually remember the last time I saw a submental farce this witless, boring and stupid. Because the stars are Sandra Bullock, Channing Tatum and Daniel Radcliffe, with an inside-joke cameo by Brad Pitt in a long blonde wig, the appeal for audiences with low standards and no knowledge of (or interest in) genuine comedy timing is guaranteed.  But nobody in this comic-book twaddle displays any talent for farce, and it is doubtful that either of the two directors, Adam and Aaron Nee, could successfully stage the baking of a batch of Girl Scout cookies.  They also wrote the screenplay, which sounds like it was dictated by baboons on tranquilizers.  Two other so-called writers, Oren Uziel and Dana Fox,  are also credited.  I’m curious which one forced Sandra Bullock to deliver a two-page monologue to Channing Tatum’s penis.

No point in dragging in the details.  Sandra Bullock is also one of the producers, so the fact that the film doesn’t make one lick of sense is hardly worth analyzing.  She plays the author of violent, trashy adventure novels that appeal to giggling girls with IQs of less than 50.  Mr. Tatum plays a boneheaded Muscles McGurk named Alan, the hunky model on all of her book jackets who actually thinks he’s the heroic character she created in her schlocky novels called Dash.  (For Dashiell Hammett, one erroneously presumes?)  Daniel Radcliffe, the faded glory of his Harry Potter days a distant memory, plays a billionaire nutcase who kidnaps them on a book promotion tour, convinced that Loretta can lead his gang of murderous criminals to the “well of endless tears,”  the location of buried treasure described in one of her novels.  Brad Pitt plays Jack Trainer, an adventurer with Lady Gaga’s hair who is recruited to rescue them—not on a white horse, but on a scooter with a broken muffler.  They all end up on a volcanic island in the Atlantic (another joke that backfires) where Loretta thrashes her way through the brush in stiletto heels and a skin-tight purple sequin leotard, but hates getting wet (“I don’t do ,” she protests—”my body becomes like an eighth grader’s face,” whatever that means.)  Alas, she ends up in a river with Alan, who emerges covered with leeches in the film’s funniest scene.  Stripped naked, he bares his buttocks for her to ogle while she rips the leeches off his most intimate hot spots, saying “It’s like picking anchovies out of my favorite salad.”  These are the jokes, and you don’t know whether to laugh or continue the nap from which you’ve been rudely interrupted.  “All that time and money spent on a cheap metaphor,” groans Daniel Radcliffe at the end of The Lost City.  He must be describing the movie itself. 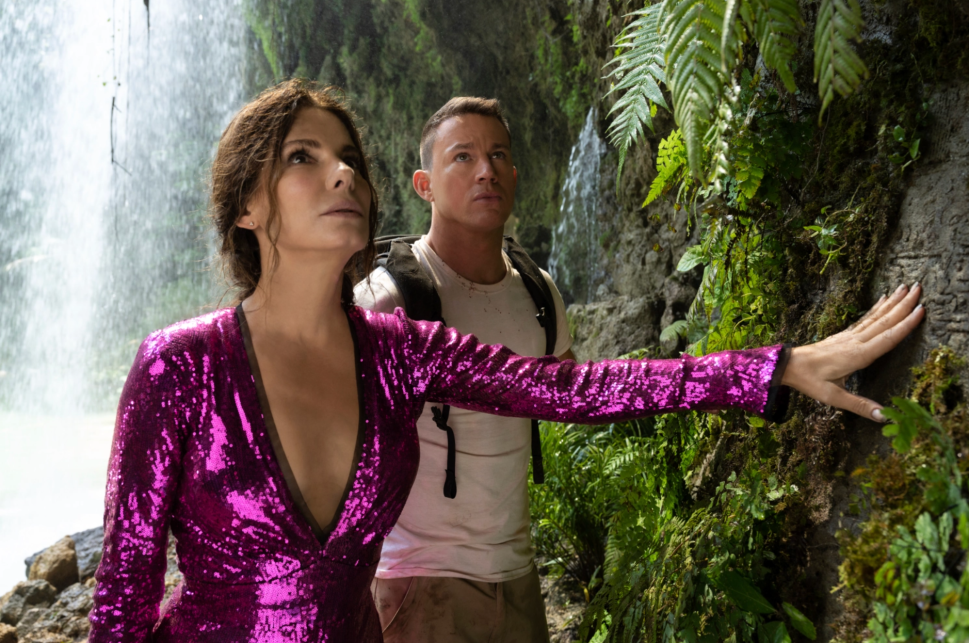