For any opera company, presenting Giuseppe Verdi’s epic Don Carlos is an exercise in both ambition and nuance. In its hotly anticipated new production of the opera, the first after a month-long winter hiatus, the Metropolitan Opera, in an evening of both towering ambition and extraordinary nuance, provided justification as much for the presentation of Don Carlos as it did for itself as an institution.

Don Carlos, a vast portrait of personal and political machinations amidst the brutality of the Spanish Inquisition, is the type of work the Met alone is able to pull off. It’s a genuine “grand opera” (referring not so much to a lavish staging, but to the synonymous mid 19th-century French genre which featured huge casts, large orchestras, and ballets), the sort of gargantuan work critical to the repertoire the Met was expressly built to house and equipped to present.

But in finally presenting it in its original French version (as opposed to the severely truncated and translated form it usually takes as Don Carlo, a result of a dizzying number of additions and subtractions made to the opera both during Verdi’s lifetime and after), the Met is excavating those grand opera roots while affording its libretto the degree of immediacy, intimacy, and detail its Italian iterations have lacked. The result is a familiar gem that feels utterly new with its context restored, and Verdi’s multidimensional score breathes and seethes with style and grandeur.

In Carlos, the orchestra, more than the characters, gives the score its all-encompassing scope, with confidence emanating from the orchestra pit highlighting the opera’s most brilliant relevancies to our time. On an evening that began with a moment of silence and a moving performance of the Ukrainian national anthem, descriptions and depictions of the Inquisition’s brutality, religious and cultural wars, and leaders mute to the needs of their people rang eerily clear.

Much of the credit for that is owed to the conductor and the Met’s music director, Yannick Nézet-Séguin, who coaxed thrilling, cohesive playing and rich colorings from the Met Orchestra from start to finish. Propulsive but sensitive to the varying abilities of the cast, Nézet-Séguin’s conducting proved a milestone in his Met career. In other words, I’ve never heard this orchestra sound better.

The opera, taken from a play by Schiller and tinged with the supernatural, revolves around Carlos, Prince of Asturias, the son of Spanish King Philip II. A tormented, recessed cipher, Carlos grapples throughout the opera with his love for his stepmother, the self-possessed Elisabeth of Valois, divergence in political philosophies from his father, the unrequited love of the Princess Eboli, and a robust (and, frankly, homoerotic) friendship with the Marquis of Posa.

Matthew Polenzani, essaying the title role for the first time, was an ideal artist (if not an ideal voice – his clean, generous tenor lacked some desired verve) to knit together the delicacy singing the French style calls for with the highflying emotion of the Italian. Opposite him, as Elisabeth, Sonya Yoncheva’s distinct, moonbeam soprano was only taxed in the role’s highest reaches where her tone loses the security and plushness of the center of her range.

Mezzo-soprano Jamie Barton may grow into the vampy Eboli, a femme fatale at court, as the run goes on, but both her singing and acting lacked a polish and coherence even if her soaring high notes and booming chest voice made a memorable impact, especially in her second aria, “O don fatal.” Similarly, Eric Owens as Philip II made a surprisingly faint impression here, with an inability to make his expressive bass-baritone fuse the haughtiness of his status with the anguish of his strained family relations and singing that often lacked any thrust. In an ideal Carlos, Philip should be the insuppressible and tormented nexus of the drama. Here, he just seemed wan.

Therefore, it was up to Étienne Dupuis to make the overall strongest impression as Posa. His sweet, high-set baritone, generous sense of legato phrasing, and adeptness onstage made him the evening’s center of gravity. In a score with one thrilling number after the other, it was Posa’s politically motivated death at the hands of the Grand Inquisitor’s assassin, a quiet scene bookended by Eboli’s barnstorming second aria and an insurrection in the prison, was an emotional high point to rival the show-stopping Grand Inquisitor scene in which Philip attempts to reconcile his family, his faith, and his government only to be met with the blind Inquisitor’s (John Relyea, his pitch-black bass at terrifying full-boil) dogmatic rage.

The strongest aspect of David McVicar’s new production, his 12th for the Met, is that it stays out of the way of the opera. The weakest aspect is its boring, ugly design, a unit set (Charles Edwards) of massive, stone walls doing little to suggest the opera’s numerous and diverse locations (think Salzburg’s Felsenreitschule, à la “the first prize, the highest honor in all Austria, goes to the Von Trapp family singers!”) and nearly monochrome costumes and wigs (Brigitte Reiffenstuel) flattering almost nobody.

But in this Carlos, both McVicar and the Met make a powerful case for not only the opera and the genre, but the institutions charged with stewarding it. The Met, struggling to regain footing as it reconciles with its own despot-loving divas and pandemic compromises, has found in Don Carlos an electrifying raison d’etre. If only it can continue forward in Verdi’s circumspect and ever-questioning spirit. 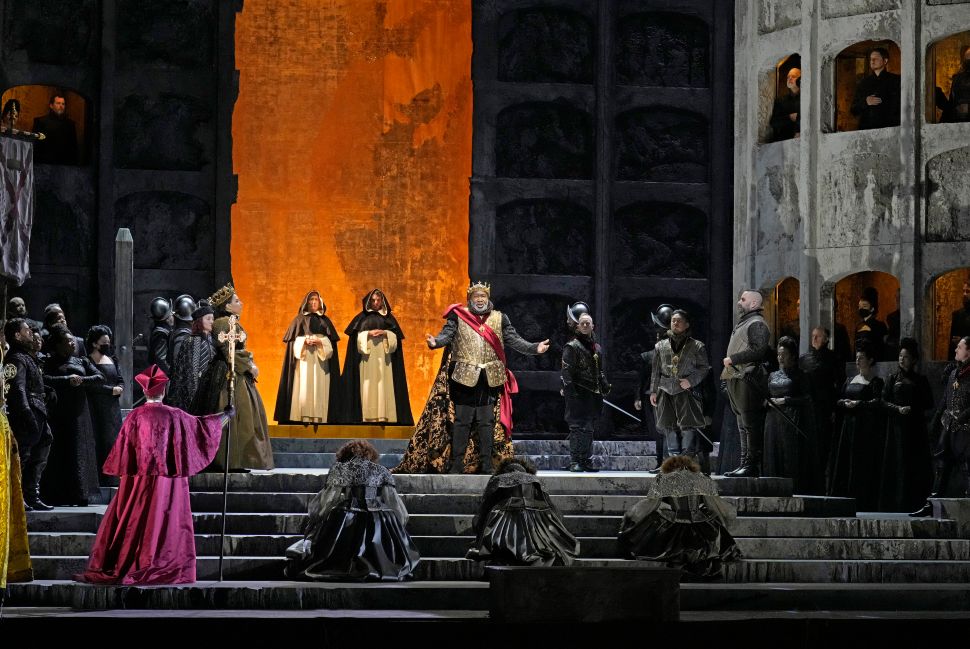