Gary Cabana, the 60-year-old disgruntled art patron accused of terrifying visitors at the Museum of Modern Art on March 12 afternoon when he allegedly attacked and stabbed two 24-year-old museum employees, was still at large two days later. A person claiming to be Cabana, who is apparently an active participant on social media, told the New York Post over Instagram DM that he’d “lost it” when the museum employees he’d stabbed refused to let him in the building to see Van Gogh’s Starry Night.

Cabana appears to have written the message March 13, while still evading capture by the New York Police Department. Both victims of Cabana’s attack were reportedly in stable condition.

NYC: Do you know him? Earlier today, inside the @MuseumModernArt he stabbed a 24-year-old male employee and a 24-year-old female employee then fled. Both victims are in stable condition at an area hospital. If you have any information, contact @NYPDTips at 800-577-TIPS. pic.twitter.com/hkEezq6rQk

The incident March 12 began when Cabana was reportedly prevented from entering the museum because his membership had been revoked.

The NYPD declined to comment on the ongoing investigation. Meanwhile, Cabana (or someone claiming to be him) has been posting incessantly about the incident. The day after the assault, Cabana uploaded a Facebook screed where he claims he’s being framed, that he was never disruptive at MoMA before the stabbing took place and that a group called “the team BARBARA gang” was responsible for him being “evicted from MoMA.”

“NOTE to catty beeyotches of the world, words are sharper than knives,” Cabana said. “Bipolar is a tough road to hoe. Dr. Jekyll to Mr. Hyde. It wasn’t SCREAM 6 at MoMA it was poke poke poke wake-up call. y [sic] the frame job MoMA, get yer facts straight.”

After the stabbing, Cabana told the Post that he’d received a letter from the security director at MoMA  revoking his membership because he’d been “aggressive and disruptive” on two occassions in the past. “NOT TRUE AT ALL,” Cabana insisted. “I was completely blindsided by the ‘letter’ from security without any meeting or consultation to explain my mental health situation and how important GREAT MOVIES are to my life.”

On the afternoon of the stabbing, a MoMA screening of the classic film Bringing Up Baby was scheduled.

For all of Cabana’s indignant bluster, the most notable comment on the stabbings may have been uttered by one of the victims. ‘I’m going to get hazard pay,’ a woman on a stretcher was quoted saying by the Post when she was rushed to the hospital on Saturday. Her visage has already begun to be memorialized via fan artwork. 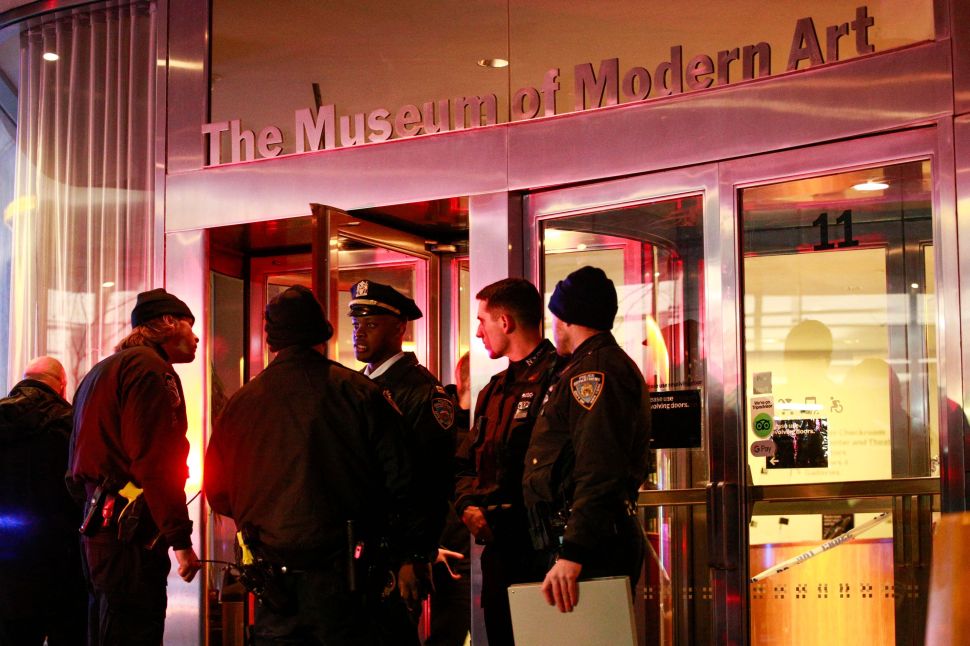