It’s fitting that Mark Rylance plays a Savile Row tailor in The Outfit as the film itself feels tailor-made to the British actor. It’s a movie that relies on the sort of nuance Rylance has mastered, and he unfolds the layers of his character, Leonard, with the same precision that goes into crafting a custom suit. Leonard has relocated from London to Chicago, where he cuts and tailors suits for a family of gangsters, and the success of the story hinges on the audience never quite knowing where Leonard stands or what he might know.

The film was written by Graham Moore, best known as the screenwriter of 2014’s The Imitation Game, and Johnathan McClain, with Moore stepping behind the camera to direct for the first time. Moore, who won the Oscar for Best Adapted Screenplay for The Imitation Game, knows how to create a sense of tension in his script, deftly buoying up the action when needed. Often The Outfit is slow and methodical, but it’s a pace that fits the story. While it is about the mob and guns are fired, The Outfit is more psychological than it is about shoot-outs.

The scenes take place exclusively inside Leonard’s shop, which the filmmakers built on a soundstage in London, and confining things so tightly only adds to the tension. Leonard’s assistant Mable (a well-cast Zoey Deutch) is dating Ritchie (a less-well-cast Dylan O’Brien), the mob boss’ son. One evening, Francis (Johnny Flynn), the Boyle family’s volatile right-hand man, drags Richie into the tailor shop, bleeding from a gunshot wound. Things unravel quickly as Leonard is drawn into the situation, seemingly against his will. Flynn’s Francis is a live-wire, sparks flying off him in all directions, and pitting him against Leonard, a composed, precise man, is particularly compelling.

As the night unfolds, more and more goes amiss and it becomes clear that Leonard might have his own agenda. Rylance plays this perfectly, the conflicts clear on his face as Leonard is confronted with unplanned chaos and shifting allegiances. Also great is Simon Russell Beale, who plays the Boyle family patriarch Roy, an imposing figure who feels more complex than simply a mafia leader. Moore directs his cast with ease, allowing the actors to find their own way in each scene, and he clearly thought carefully about how much to reveal when. The culmination of the secrets and the growing tautness results in a tumultuous climax that feels just unexpected enough. By the time all the cards are on the table, you care deeply about Leonard, another tribute to Rylance’s performance.

The Outfit is a very different film than The Imitation Game, although both stories rely on historical detail and a central character who is relatively complicated. This is a simpler narrative, even for its twists, and occasionally slows down a bit too much. But The Outfit hints at a very interesting career to come from Moore, who grew up the film’s setting of Chicago. It’s also a masterful showcase for Rylance, who is quickly becoming one of Hollywood’s best actors. While The Outfit not the most original story, here, under Moore’s direction, it’s very well told. 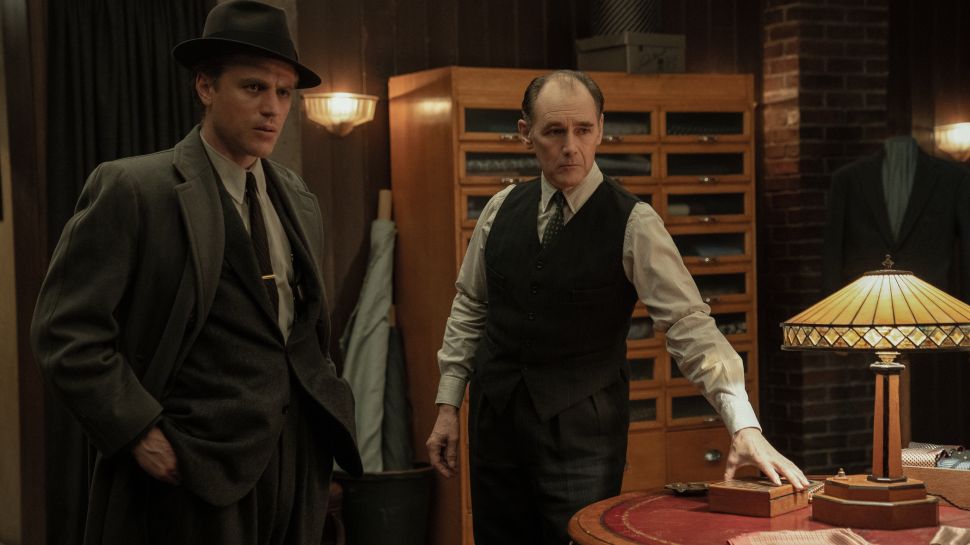