The second most viewed music video of 2019 on YouTube was Rosalía and J Balvin’s “Con Altura.” Rosalía and her dancers, all women, do choreography on a plane small enough to be an oligarch’s Gulfstream. At one point, Rosalía is dressed as a red flame, just on the nose enough for this moment. Her producer El Guincho (Pablo Diaz-Reixa) plays the very relaxed pilot, and her co-star, J Balvin, hangs out in a plush leather seat, the even more relaxed MC. The track is hard-as-nails reggaeton with a brief hook that you hear many, many times: “Con altura,” or “with height,” or maybe more like “catch some air, up there.” A baby could sing it, and apparently a lot of them did.

Rosalía spent a few months of 2019 touring her second album, El Mal Querer, a fearless half-hour (short!) of experimentation and exploration she created with El Guincho and her close friend, Ferran Echegaray. It spawned a global hit, “Malamente,” which put together the palmas (hand claps) of flamenco with a reggaeton-leaning beat. She and her dancers, Las 8 Rosas, were like a small cultural battalion, all over social media with a physical embodiment of Latinx culture, completely robust and joyous without any particular concessions to existing norms. Their stop at Webster Hall in April of 2019 was one of the most focused and ecstatic shows I’ve ever seen from someone operating in the world of top billing popularity. I haven’t seen anything better since.

Popularity doesn’t seem to ever dull or inhibit Rosalía, and her new album, Motomami, is exactly as unpredictable as El Mal Querer was, in an entirely different way. She’s made a Spanish language album with barely any references to what we think of as Anglophone pop or rap. On Thursday night, used TikTok to debut a video version of Motomami. The TikTok show was a half-hour affair which she introduced as a “reduced version of the album I’ve been working on for three years,” co-created with Stillz, Echegarray, her sister, Pili, and the Spain-based film collective CANADA (who did the “Malamente” video). Most of it took place in a white backdrop photo studio, similar to the minimal set she used on SNL recently, where she sang in Spanish and used almost no stage trickery.

She began the TikTok film wearing the motorcycle helmet that serves as her current watermark, her Motomami uniform. The first song on the album, “Saoko” samples a Wisin and Daddy Yankee track of the same name, a nod to the stars she grew up on. Rosalía even uses a pack of drum sounds employed by several generations of reggaeton producers on “Saoko,” provided to her producer NaisGai. As there are nine songwriters and four producers on the track, I can’t tell you reliably who did what but it’s mostly a stomping reggaeton beat and distorted piano line. The idea here is in the line “yo me transformo,” from into ice, night into day, or an average joe into a pop star, as seen on Lluvia de Estrellas (the Spanish language American Idol-ish competition she references). The TikTok show was filmed on an iPhone and mostly rendered in vertical aspect, though not entirely. (A note at the open recommends that the viewer watch on a phone and change aspect when necessary.) For the moment, Las 8 Rosas are gone, replaced by male dancers all wearing modified motorcycle helmets. For “Saoko” only, the camera seems to be inside a helmet, too.

“Saoko” is a stinging, bright song, and short. At the end of the lyrics, we get to her mood right now: “Fuck el stylist, fuck el estilo, tela y tijera, y ya.” She doesn’t mean that literally, since her main style collaborator is still Pili. But she’s found herself in the middle of international fame, and has made her third album in a context where somebody—maybe on her team, maybe at her label, Columbia—likely suggested she make a melodic record, maybe pump up the star features. And she gives us that, but just the once, on “La Fama,” with the Weeknd. Mainly, the album circles the twin heartbeats of reggaeton and bachata. Rosalía doesn’t upend Anglophone pop on Motomami so much as ignore it.

In the middle of all of her visual delight and mayhem, Rosalía is a musician of the highest order. Revisit her SNL performance, a chilly setting in which few can sound even competent. She did “La Fama,” while wearing what looked like a shower grip mat and a duvet, and sang both parts of a song that seems to be about a stalker? Maybe? There’s no love for fame in the lyrics on the album, and also no whining about it—just a rejection.

El Guincho is on Motomami, as is a young LA producer named Michael Uzowuru, who is on almost every track. “Bulerías,” on Motomami, is a pure flamenco track, with nothing but midfield palmas rhythms, and the quick vibrato in her voice that flamenco favors. Loosely translated, she’s singing about the fact that she’s always a flamenco singer (cantaora) whether she’s wearing a Versace tracksuit (“chándal de Versace”) or a traditional flamenco dress. She’s not taking either path—the athletic experiments of El Mal Querer are gone, and there are only three songs that feel centrally related to flamenco.

The few references to hip-hop that ran through “Con Altura” and pre-Motomami singles like “A Pale” and the Travis Scott collaboration “TKN” are gone from her music, as are big, obvious hooks. But none of this is necessarily that radical, when you consider the most viewed video of 2019, the one that beat out “Con Altura”—“Con Calma,” by her idol, Daddy Yankee, along with Snow. In fact, YouTube’s top three music videos that year were all sung or rapped in Spanish. Motomami is on top of a world that already exists, whether or not Americans want to see it. 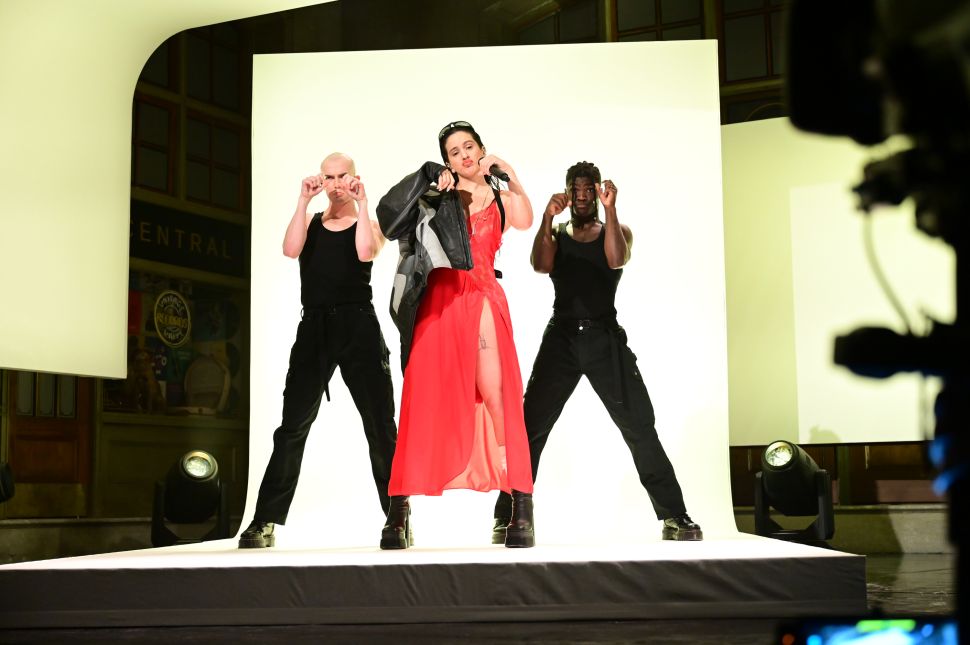