Representation of Bitcoin and Russian flag displayed on a screen in the background are seen in this illustration photo taken in Krakow, Poland on March 1, 2022. (Photo Illustration by Jakub Porzycki/NurPhoto via Getty Images)jledbetter
By Alexander Webb • 03/04/22 3:13pm

The fintech industry is premised on the idea that transferring money should be fast, cheap, and borderless. But in a matter of days, Russia’s invasion of Ukraine has upended this premise.

Consider the London-based Wise, which says its mission is “money without borders.” The money transfer company, which used to be named Transferwise, has “temporarily stopped” transfers in Russian rubles, due to ongoing war in Ukraine.

A Wise spokesperson told the Observer it will “monitor the situation closely and comply with any sanctions.” It also confirmed it will keep its services to Ukraine, which remain open, “as long as we’re able to do so.”

All across the globe, companies founded to make financial transfers as easy and quick as possible now have to adapt to a world where such transfers can be a legal or reputational liability.

Russia’s invasion of Ukraine is hugely unpopular in the West, and businesses have reacted accordingly. Multinational giants like Nike, Apple, Shell and BP are pausing or exiting their businesses in the country. Basic financial services like Apple Pay and Google Pay no longer work for many Russians, and financial sanctions mean that even legacy financial technologies such as SWIFT cannot be widely used. Everything from riding the subway in Moscow to sending money abroad has become difficult or impossible.

At the same time, fintech innovations have also emerged as a way to fund humanitarian causes in Ukraine. The crisis has “really galvanized the crypto and NFT space into action” said Sherin Z, COO of NFT project VoxoDeus who told the Observer their community is donating 10 Ethereum (currently valued at over $20,000) to Ukrainian humanitarian causes. It appears that Ukraine is the first government in wartime to accept cryptocurrency donations (although for many citizens, given spotty internet and electricity service, using cryptocurrencies is impractical or impossible).

In this sense, the invasion has polarized the world of cryptocurrency. Mykhalio Fedorov, Ukraine’s Minister of Digital Transformation, has called on crypto exchanges to ban Russian users, in part to prevent money laundering by Russian elites. The Binance exchange, for example, said it will not accept cards from the sanctioned Russian banks.

But even if exchanges ban or freeze Russian users, the Bitcoin network as a whole is nearly impossible to completely shut down. “Bitcoin is extremely resilient in situations like this,” said Brett Haralson, Director of Community at Melio, a fintech payments company. “Interestingly, both sides could use the same network for diametrically opposed goals. And no one can stop them from transacting.”

Executives at cryptocurrency exchanges have tried to thread the needle, with Jesse Powell, CEO of Kraken arguing on Twitter that they “cannot freeze the accounts of our Russian clients without a legal requirement to do so.” Doing so would go against the “libertarian values” of Bitcoin, Powell claims. Still, his statement alluded to the fact that major cryptocurrency exchanges may not be able to avoid the impact of Western sanctions, adding, “Russians should be aware that such a requirement [to freeze Russian accounts] could be imminent.” A prolonged conflict in Ukraine may force many nations to rethink their relationship to cryptocurrency. 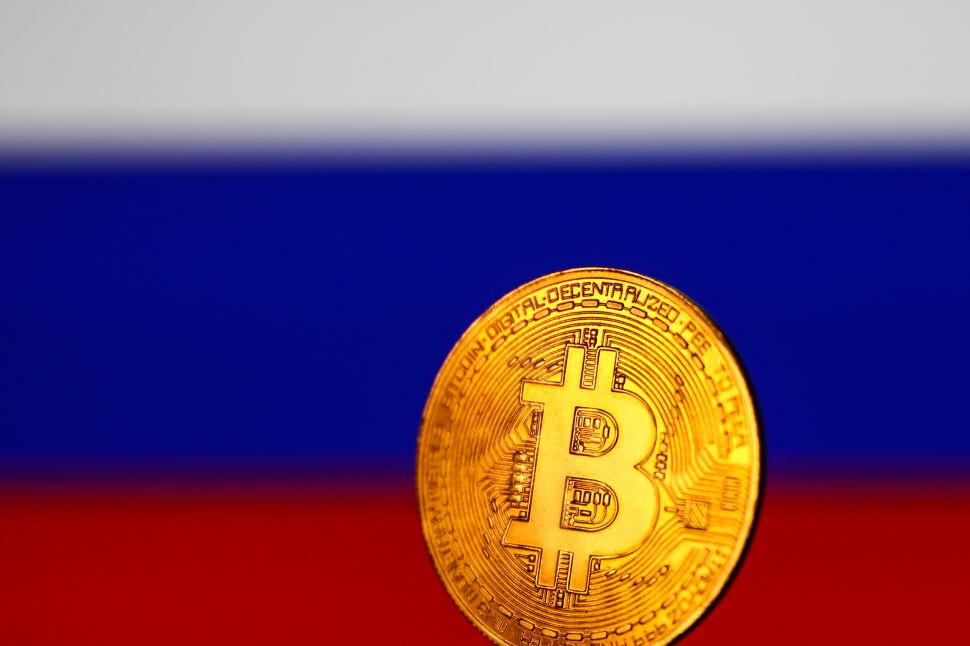