A few hours into the 2022 Academy Awards ceremony, shortly before winning the prize for Best Actor for playing tennis visionary Richard Williams, megastar Will Smith smacked Chris Rock in the face after Rock had just cracked a joke about Jada Pinkett-Smith’s shaved head. Immediately, the internet fell to pieces dissecting the incident, indicating the slap may have reverberating implications beyond a few days of memes and mayhem. It was an extraordinary moment that threatened to overshadow what should have been one of the most triumphant evenings of Smith’s life.

Throughout his career, the actor has built a brand rooted in fun-loving affability and family-friendly tunes. His image and talent catapulted him to a superstardom that was peaked during the 1990s and 2000s. Smith still holds the record for most consecutive $100 million movies at the box office, and despite a few flops in recent years, the actor’s Oscar win was set to solidify his status as both a critically and popularly beloved leading man.

After smacking Chris Rock, it’s possible that Smith may have compromised his future, but looking at other instances of public celebrity misbehavior, the likelihood of the actor suffering long-lasting repercussions might be less certain than you might think.

Jada Pinkett-Smith has spoken candidly in the past about the distress she’s felt due to suffering from alopecia, an autoimmune disorder that can cause sudden hair loss. Pinkett-Smith was visibly unamused by Rock’s joke, and her reaction likely played into Smith’s decision to retaliate.

Later, in his acceptance speech, Smith referred to Richard Williams as a “fierce defender of his family,” adding that “I look like the crazy father just like they said about Richard Williams. But love will make you do crazy things.” The perception that Smith acted in defense of his wife’s honor prompted many to speak out in support of the actor, and may continue to convince others to be on his side.

While hosting the 2016 Oscars, Rock made another joke about Pinkett-Smith’s decision to boycott the ceremony: “Jada boycotting the Oscars is like me boycotting Rihanna’s panties,” Rock said. “I wasn’t invited.” The idea that the slap was the result of a long-brewing feud led some on Twitter to suggest Rock had it coming.

A history of show business fisticuffs

Hollywood history is littered with stories about high-profile feuds that got physical. During the 2007 MTV Video Music Awards, Kid Rock and Tommy Lee got into a fistfight; Lee had to be escorted from the premises by security. Bette Davis reportedly kicked Joan Crawford while they were on set together, Werner Herzog and Klaus Kinski had a fight involving a gun on the set of Aguirre, Wrath of God and a brawl once broke out in a Saturday Night Live between Chevy Chase and Bill Murray. For essentially all of these stars, these dustups became footnotes in long careers.

What sets the Smith/Rock incident apart is that it took place during the Oscars, unquestionably the most high-profile cinematic event of the year. “I want to apologize to the Academy,” Smith said during his acceptance speech. “I want to apologize to all my fellow nominees.” While the proceedings come with an air of elite prestige, in truth, the Oscars have frequently been disrupted in the past by shocking behavior.

In 1973, Marlon Brando sent Native American actor Sacheen Littlefeather on his behalf to decline the Oscar he’d been awarded. After calling earnestly for an end to the degradation of indigenous people onscreen, Littlefeather was booed by the audience, and six security guards had to physically restrain American western star John Wayne from removing Littlefeather from the stage.

Smith is not John Wayne, or Chevy Chase or Joan Crawford; he can only be and represent himself. Whether or not he can move forward prosperously from the incident depends entirely upon whether the public will be able to accept the complicated dynamics at play. Because of the goodwill he’s accumulated over decades in the industry, Smith can probably pull it off.

After the ceremony, Smith was filmed celebrating his win at the Vanity Fair Oscar Party while dancing to “Gettin’ Jiggy Wit It,” one of his biggest hits. “I would like to bet everything I have that next year there will be a Superbowl commercial with Will Smith and Chris Rock eating Tostitos,” comedian Tom Scharpling tweeted. 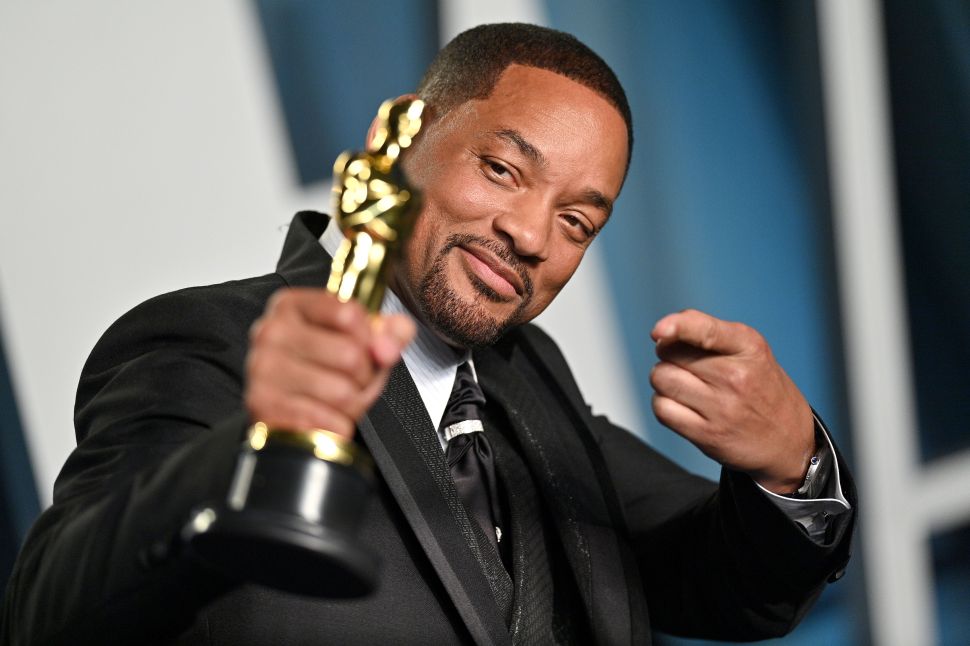