Another decibel-blasting assault on the IQ by Michael Bay, a pointless, predictable thriller without any thrills anyone is likely to remember called Ambulance brings summer silliness to the screen several months early this year.  No surprise here.  This is a director whose only interest is in entertainment without a trace of originality.  He isn’t interested in quality, only in length, noise, and stale ideas from old movies.  There’s plenty of all three in Ambulance.

Based on a much better 2005 Danish film with the same title that  ran in half the time, this is a Hollywood exercise in energy without style by a maximalist director with minimalist logic.  What passes for plot can be written on the head of a safety pin.  Broke, unemployed and desperate, a nice but out-of-luck Black man named Will (Yahya Abdul-Mateen II) needs a hefty sum to pay for his wife’s surgery.  The only person he can turn to for a loan that big is his estranged white adoptive brother Danny (Jake Gyllenhaal), a charming career criminal with a knack for telling septic jokes and robbing banks.  To get his loan, Will is sucked into an elaborate scheme to relieve a California bank of more than $30 million if he’ll drive the getaway car.  The heist goes terribly awry, Will accidentally shoots a cop before leaving the vault, and the getaway car is exchanged for a runaway ambulance inhabited by the two brothers, the dying cop, and a pretty paramedic (Eiza González) who tries to keep her patient alive by removing his bullet-riddled spleen with her bare hands at 60 mph.  What ensues is 2 hours and 16 minutes of preposterous mayhem televised “live” on every cable channel and aimed for a market hooked on dumb, impractical escapist nonsense—as Will and Danny are pursued by a fleet of helicopters, criminals hooked on technology—and what appears to be the entire vehicular budget for Southern California.  This is described by one member of the LAPD as “a very expensive car chase.”  Only in a Michael Bay movie can killing so many innocent civilians, splattering the screen with blood, and trashing so much Los Angeles real estate seem boring.

There’s too much chaos for you to worry about dozing off, but during most of the movie I kept wishing it would make some kind of narrative sense.  The paralyzing problem from start to finish is that the actors are trapped without anything to say or do that amounts to more than pawn shop value.  Characters enter and you don’t know who they are.  Violence erupts in every scene when you least expect it. Jake Gyllenhaal has made some serious and responsible films.  This is not one of them.  He is probably not to be blamed.  The screenplay by Chris Fedak gives him nothing realistic to do to bring his character to life.  The last thing the director and the scriptwriter care about is telling a story with linear coherence and fully fleshed out characters.  The camera keeps circling back around the ambulance as it passes the same fruit wagons, the way Roy Rogers used to pass the same rock formations chasing outlaws while riding Trigger.  Hundreds of extras in cop uniforms run and scream and shout in oversize designer sunglasses, it’s impossible to comprehend. Just when you think it’s over somebody else finds another machine gun, another shoot-out begins, and Los Angeles has never looked uglier. 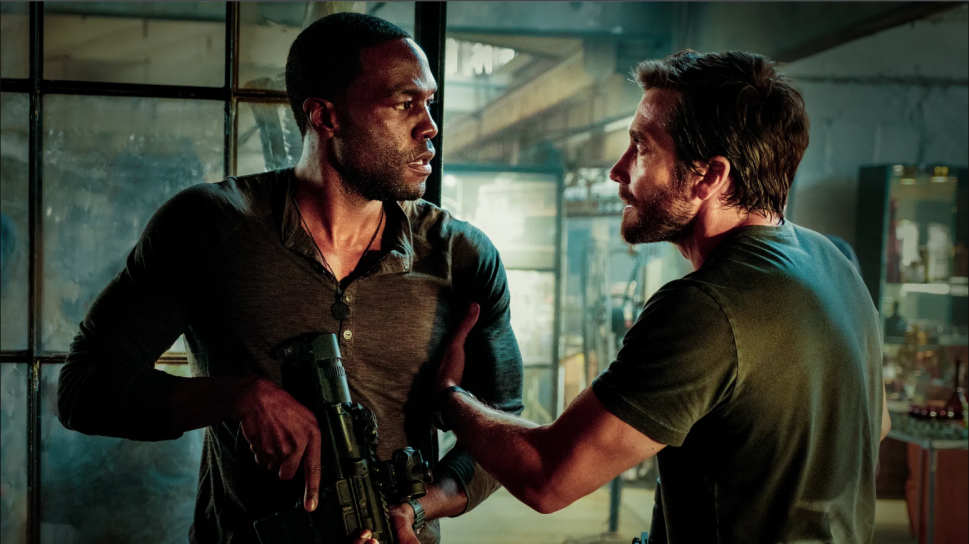