A growing number of U.S. Big Tech companies, including Apple, Amazon and Google, are raising their bets in India, looking to tap the country’s vast industrial and consumer potential while reducing their reliance on China as a manufacturing center and market. The chaotic Covid-19 situation in China, a major supplier to American tech giants, is only accelerating that process.

Apple announced on April 11 it has started making the iPhone 13 in India, marking a major move to diversify manufacturing away from China. Production is underway at a factory in southern India owned by Taiwanese company Foxconn, Apple’s longtime contract manufacturer, according to the Mac Observer.

Apple launched manufacturing operations in India in 2017. The first product made there was iPhone SE. Since then, Apple has assigned the production of iPhone 11 and iPhone 12 in India through two Taiwanese contractors: Wistron and Foxconn.

The iPhone 13 move further shows Apple’s intention to reduce its reliance on China, where Beijing’s stubborn zero-Covid policy has severely disrupted its supply chain this year so far. Before the pandemic, Apple also expressed concerns over dependence on Chinese suppliers following the Trump Administration’s tariff rules.

Foxconn has 12 factories in nine Chinese cities, and Apple makes the vast majority of its phones in the country. Multiple plants have had to pause operations recently due to local Covid-19 lockdown orders. In March, Foxconn’s main manufacturing campus in Shenzhen was partially shut down for a week because of a local Covid outbreak. Last week, another Foxconn plant in Kunshan, a manufacturing town on the outskirt of Shanghai, was temporarily closed amid mounting fears of Covid spread from Shanghai.

Thanks to strong local demand for high-end smartphones, Apple still has a sizable market in China. In 2021, Chinese buyers accounted for 20 percent of Apple’s global iPhone sales, according to Counterpoint Research, a Hong Kong-based consumer electronics analysis firm.

Non-manufacturing tech giants like Google and Amazon are also turning to India after unsuccessful forays in China.

Amazon gave up on its e-commerce business in China in 2019 after failing to gain traction for years. Google ended its search product in China in 2010 as the result of the country’s internet law blocking all foreign search engines.

In 2020, Google parent company Alphabet set up a $10 billion India Digitization Fund to support Indian tech companies. About half that amount was invested in Indian telecom giant Jio Platforms with the goal to make affordable smartphones for country’s low-income population. In June 2021, the joint venture released its first product, a 4G phone called JioPhone Next.

Two years earlier, in 2018, Amazon and Walmart engaged a bidding war to acquire a majority stake in India’s largest e-commerce company, Flipkart. Amazon lost the bid, but didn’t give up on the market. In January 2020, Amazon’s then-CEO Jeff Bezos paid a highly publicized visit to India and announced a $1 billion initiative to invest in local small e-commerce businesses. The strategy is similar to Alphabet’s.

Historically, India has been a difficult market to crack for American companies, which have also faced a blizzard of regulatory and political barriers to doing business. Before the deal with Jio Platforms, Google had made multiple unsuccessful attempts, including the introduction of the $100 Android One smartphone in 2014 and the Android Go operating system in 2017.

The appetite for smartphones is growing in India, but still far from the point where companies like Apple can find a meaningful market. Last year, India, Vietnam, Malaysia, Thailand and Indonesia together accounted for 3.5 percent of global iPhone sales, according to Hong Kong firm Counterpoint.

But manufacturing shows promise after Indian Prime Minister Narendra Modi’s government rolled out incentives to help kickstart a few chosen industrial sectors. Among them are smartphone manufacturing, which is eligible for incentives of up to $5.4 billion. Exports of mobile devices have skyrocketed since the 2020 introduction of incentives and reached nearly $6 billion in the year ended March 2022, representing a 50-fold jump in the past five years, according to the India Cellular and Electronics Association, an industry group whose members include Apple and Foxconn.

For now, Apple is still heavily dependent on China. In 2021, China accounted for more than 95 percent of Apple’s global manufacturing base, while India made up for 3 percent, according to Counterpoint. The analysis firm estimates India’s share will grow to 5 percent to 7 percent this year. 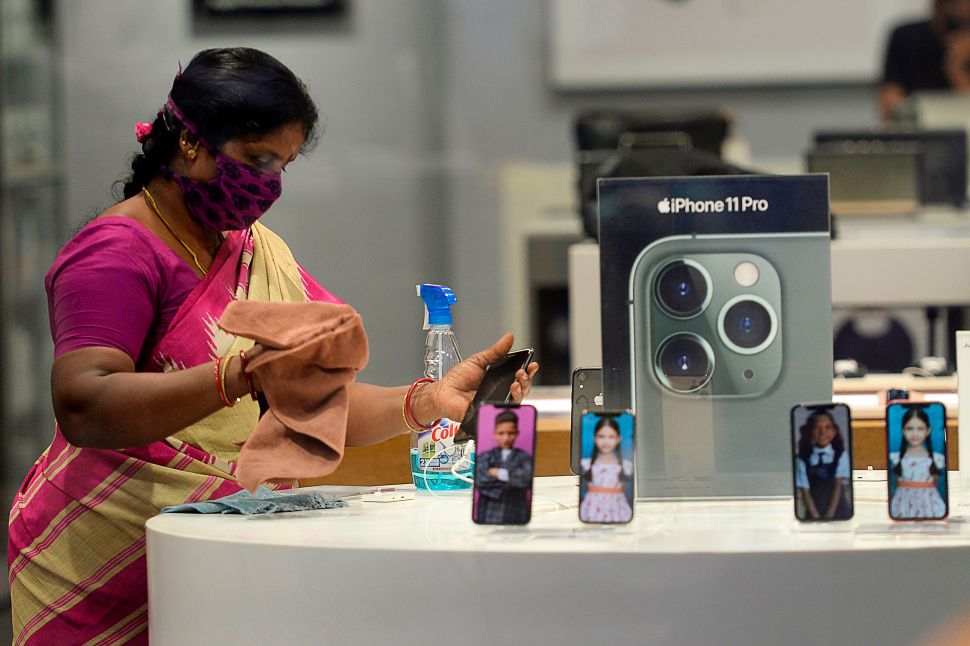