Hair and makeup stylists at the Atlanta Opera are trying to form a union with IATSE Local 798. As part of the very first opera company in the nation to reopen during the pandemic, in the fall of 2020, these hair stylists were front-facing workers who—given the nature of their work—were not able to socially distance. The performers they were styling couldn’t wear full PPE while having their makeup done. Despite the dangerous work they were doing in a very uncertain period, working before vaccines were widely available, they were not given health benefits. They also didn’t receive pension benefits or overtime pay. They were considered independent contractors—even while working side-by-side with unionized employees who received all the benefits and pay that they lacked.

Angela Johnson, the hair stylists’ representative at IATSE Local 798, told Observer that the motivation to form their union began when they discovered just how many of their coworkers in other departments were unionized and had the pay and benefits that they lacked. For entire seasons they worked beside stagehands, wardrobe workers, and musicians who were unionized. Their coworkers were fully protected with health benefits during this highly dangerous time. The stylists, all of whom are Black, and a majority of whom are women, loved their jobs. They loved working in a creative field alongside performers. Some, such as department head Brie Hall, had been working at the opera for years and were responsible for designing looks for performers. They felt like a part of the team, working for an organization that they thought of as being diverse and progressive.

“I definitely am a theater girl,” Brie Hall told Observer. “It was always fun. It was definitely joyous working there and being creative and making sure when you do something, you’ve got to nail it because the audience is watching.”

Coming back from lockdown, Hall noticed that her coworkers in wardrobe were getting paid time and a half for working weekend shows. The hair stylists weren’t. Meanwhile, they feared for their lives and the lives of their loved ones, working on performers’ maskless faces, without health benefits, during a global pandemic. The Atlanta Opera went to great lengths to ensure the safety of their workplace, with mandatory distancing guidelines for all workers. The unprotected stylists felt glaringly left out of consideration.

Sakeitha King, another stylist at the Atlanta Opera, told Observer, “When we go out to work and we put our craft and things that we love at the forefront, we would like to be compensated a living wage.”

When the stylists asked the Atlanta Opera for voluntary recognition of their union, they didn’t respond. After several more attempts at communication, before the close of the spring show, they filed with the National Labor Relations Board (NLRB). They were granted an NLRB hearing and the regional directors found in their favor and ordered an election. The Atlanta Opera appealed the case, and the regional directors found in the workers favor a second time. The hair stylists finally voted over the summer, but the opera appealed again, this time to the NLRB in Washington DC. The opera’s claim is that the stylists were independent contractors and not employees and therefore ineligible to unionize. In appealing, the opera was able to get the stylists’ votes impounded while the NLRB considers the case. It has remained in review.

Through the Atlanta Opera case, the NLRB asked for briefs from the public in December to address whether they should reconsider their standard for determining independent contractor status.

Their case has gained national attention because of the leftward turn of President Biden’s NLRB. It is now theorized that the board might want to broaden the definition of employee, making it harder to misclassify workers, like these hair stylists, as independent contractors. The board is currently revisiting the Trump-era standard for employee classification and they have invited the public to submit amicus briefs on reclassification. IATSE 798, however, maintains that even under the Trump-era rules, the stylists are indeed employees and not independent contractors.

For Hall, the opera companies’ insistence on their continued misclassification as independent contractors felt discriminatory, especially given that everyone else who worked backstage were employees. Gig work in their field has specific connotations: it’s a day of work, like a wedding. An entire season of work isn’t a gig, it’s a job.

Given their exclusion from the rights and pay of the many unionized employees they were working with, it’s no wonder these workers, a union made up of mainly Black women, felt personally persecuted.

“I don’t understand why we don’t even deserve a conversation to negotiate,” Hall told Observer. “We were stonewalled. We never got to be heard at all. Me along with my other coworkers would really like to know why.”

As the NLRB considers the case, the Atlanta Opera has not rehired these stylists under even their former conditions. They offered reduced wages and working conditions. Some stylists might even have gone back to work at the opera, but the opera house requested their return far too close to the beginning of the season, when the stylists had already been committed elsewhere. The opera company, according to Johnson at IATSE, is now hiring stylists who live out of state, no doubt because out-of-state workers are unlikely to want to form a union. The Atlanta Opera did not respond when reached out to for comment for this article.

As the case is reviewed, other performance industry unions have issued letters of support for these hair stylists. Actors’ Equity cites how frequently their members of color experience hair and makeup discrimmination at work, and how this is due to the scarcity of Black technicians in the industry. “Hiring Black workers but refusing to treat them equitably only exacerbates this crisis,” they wrote in their release last month. AGMA, the union representing opera singers, also issued a statement, condemning the Atlanta Opera’s retaliatory behavior and applauding the stylists for not backing down. As these workers await a ruling from the NLRB which has the potential to be a historic win for workers’ rights nationally, the union continues to organize. On April 30, IATSE Local 798 will be holding a rally in Atlanta in support. In the meantime, they are encouraging people to call the Atlanta Opera and demand union recognition. 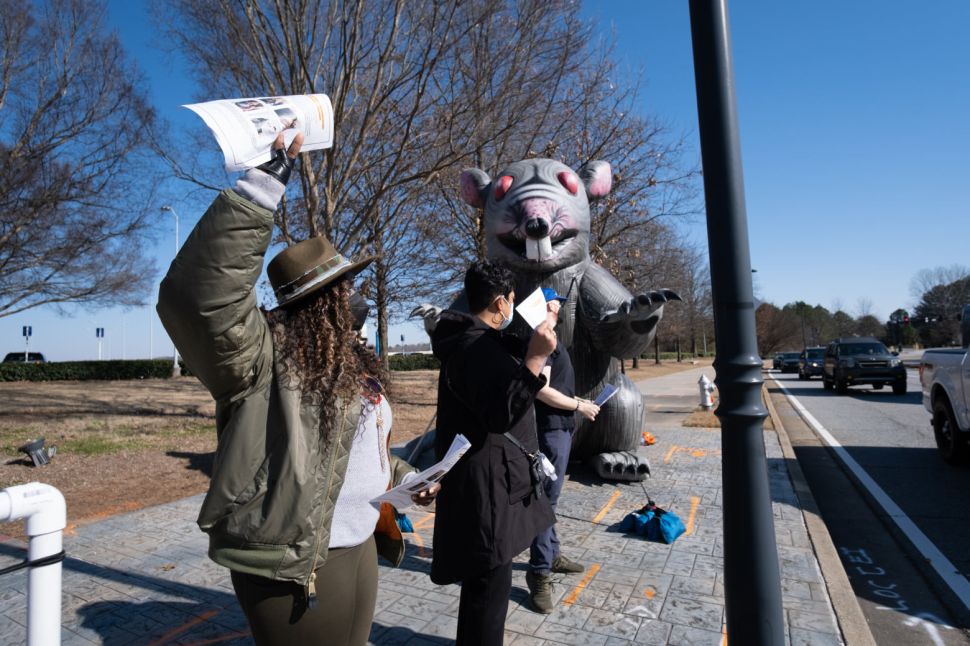