Bryan Batt made his debut on Broadway in 1992 as Munkustrap—the storyteller/guardian of the Jellicle cat tribe in Cats—and, after a dizzying year of that, he thought he’d try his hand at an Off-Broadway non-musical. He picked Jeffrey, Paul Rudnick’s urbane rom-com about finding love in the age of AIDS, and auditioned for the role of Darius, a dancer in Grand Hotel.

“Are you really in Cats?” Rudnick asked. “Yep, now and forever,” Batt shot back. (Back then, Cats was known as “The Now and Forever Musical.”) That line got a laugh from Rudnick, made it into the play, turned Darius into a dancing cat and won Batt the role in the play and the film version.

Batt has spent most of his career cracking-wise—most memorably as Salvatore “Sal” Romano, a closeted art director at the Sterling Cooper agency until he was unfairly axed in Season Three of Mad Men for declining a client’s sexual proposition. The show’s writers promised him a vengeful return as a hot-shot movie director, but the series ended before that storyline ever materialized.

Movies, television and various writing projects have kept Batt missing in action on the New York theater scene for decades. But now he’s baaack—and no longer bound to the Now and Forever—in To My Girls, JC Lee’s tres gay comedy which opens April 12th at Second Stage’s Tony Kiser Theater. It’s his first Off-Broadway effort since Ascendancy at the Rattlestick Theater in 1998.

Counting the understudies and including Second Stage’s Broadway opus Take Me Out, the theater company is employing 26 actors—and not an actress among them. To My Girls has assembled the first all-gay cast since the Tony-winning 50th anniversary revival of Mart Crowley’s The Boys in the Band in 2018. Here, in addition to Batt, the lineup consists of Jay Armstrong Johnson, Carman Lacivita, Maulik Pancholy, Noah J. Ricketts and Britton Smith.

“It’s a wonderful, beautiful group of people,” declares Batt. “Right from the start, we have had so much fun. I knew Noah before, but the other cast members I did not know, and I adore them. We truly have a blast together. I’ve been wanting to work at Second Stage for a long time. Plus, this is a new play in New York, and I have not done one of those in a while. All the stars aligned.

“I’m a big fan of JC’s and a huge fan of the director, Stephen Brackett. Together, they have created a perfect environment for actors. It is heaven for us just to go to work every day.”

Batt plays the proprietor of an Airbnb in Palm Springs where a once-tight group of gay friends converge to reconnect or—when the turbulence gets too intense—disconnect. They come with wigs, gossamer frocks, and freshly honed zingers (“On my drive I saw an armadillo that looked like Kellyanne Conway—I almost ran over it out of spite”). This is The Boys in the Band with pool toys, the most imposing being a gigantic rubber swan named Rebecca after the Hitchcock flick.

Although he’s not above joining the boys occasionally in their little fun and games, the 59-year-old actor definitely looms over the proceedings like a senior cast member. “That I am, across the board,” Batt freely confesses. “It’s weird because I remember being the youngest, and it wasn’t that long ago. But with that comes responsibility. Sometimes, they look to you for some wisdom because we’ve been around a while. I lived through the AIDS epidemic, 9/11, Hurricane Katrina and now this. That brings some insight. They are very kind, these young men—and very loving.”

Batt is even allowed a strong scene where he can do some senior-assessing of the bad behavior he’s observing. It’s not about them throwing pillows around or putting their feet on the glass-topped table. What galls him is their interplay. “They’re bitching and tearing each other apart and tossing around these millennial words he doesn’t really understand. He’s seen the world change so rapidly. He has lost lovers to AIDS and a lot of friends, and it disturbs him to see the next generation doesn’t appreciate or take care of each other. They fight and intellectualize things that don’t matter because they’re afraid, underneath it all, they have nothing to say.”

This is very much a senior talking. “That’s what is so brilliant about JC,” insists Batt. “JC is not an old crank.” (The playwright is 39.) “I first read the play at the Zoom reading in March of 2021, and then we did a live reading up here in the summer of ’21. I was kinda taken aback by the character I was playing. He’s very different from me in many ways. In some ways, he’s similar.

“I thoroughly enjoyed it, but, with the rewrites and the edits, it’s changed a great deal from that first reading, which is par for the course and what should happen. A lot of times, a play takes on a different life of its own. JC’s been around making changes. He’ll make a big cut, then we’ll rehearse it, and he’ll say, ‘Only if you feel comfortable doing it tonight.’ Which takes off the pressure, but it also makes you want to do it. It’s created this environment where all we want to do is to serve the piece—make the play as best as we possibly can and have the audience like it.”

Playwright Lee does not use the word Covid. He says “plague,” leaving the door open for an AIDS reading, but he wrote the play during the pandemic and set it in the post-pandemic, perhaps a tad prematurely given the shows that have been temporarily shuttered because of the disease.

In point of fact, Batt came down with Covid the second day of rehearsal. “I’d been vaccinated—two shots and a booster—so, for me, it was very mild,” he reports. “I’d say it was like having a minor, minor cold—and, after five days, I tested negative and was back in rehearsals. Then, the symptoms started. I had aches and memory fog and lost my sense of smell and taste, but I think that now I’m pretty okay. It affects everyone differently, so it’s nothing to play around with.”

Getting back into New York theater scene has been exciting for Batt. “The other night we were at the opening of Take Me Out. What was great about it was that there was a lot of Broadway people and a lot of industry people, but it wasn’t one of those oh-look-at-me events. Really, everyone was just thrilled to be at a Broadway opening and see each other. It was just fantastic!”

It’s hard these days for Batt to say where he calls home. “That’s confusing,” he admits. “New Orleans will always be home because that’s my hometown and we live there now, but right now I’m in New York, and I’m feeling like I’m back home again. A friend of mine lives between New York and New Orleans, and she calls herself a New-New. I guess that would be what I am, too.”

An actor’s life was almost inevitable for Batt. His family founded the Pontchartrain Beach Amusement Park, and his mom was a dance/voice major he coaxed into doing community theater. “They needed an older woman who could tap-dance for 70, Girls, 70, and I said, ‘My mom can tap.’ They said, “Oh no, your mom is a social matron. She does parties and benefits.’ I said, ‘No, trust me. My mom can really tap.’ And she came in and knocked their socks off.”

Batt found his husband, Tom Cianfichi, on tour in Akron with Evita. He played Che, and Cianfichi understudied Magaldi. Together since 1989, they own and operate a home furnishing store-gift shop, Hazelnut, on Magazine Street in New Orleans “It’s been thriving and doing wonderfully.”

Of late, Batt has gone literary and authored three books, starting with his 2010 memoir, She Ain’t Heavy, She’s My Mother. His latest calling is playwriting. “I’ve written a one-man show called Dear. Mr. Williams. It’s my story growing up in New Orleans, but told through Tennessee Williams’ words. He had to leave St. Louis and come to New Orleans to find out who he was. I had to leave New Orleans to come to New York to find out who I was. His words guide me along.

“I’ve performed it in New Orleans at La Petit Theater in the [Latin] Quarter. Some New York producers happened to be down there, and now there is interest in bringing it to New York, so, fingers crossed, that all can work out and I’ll be back on the boards up here again soon.”

A tale of two cities continues. 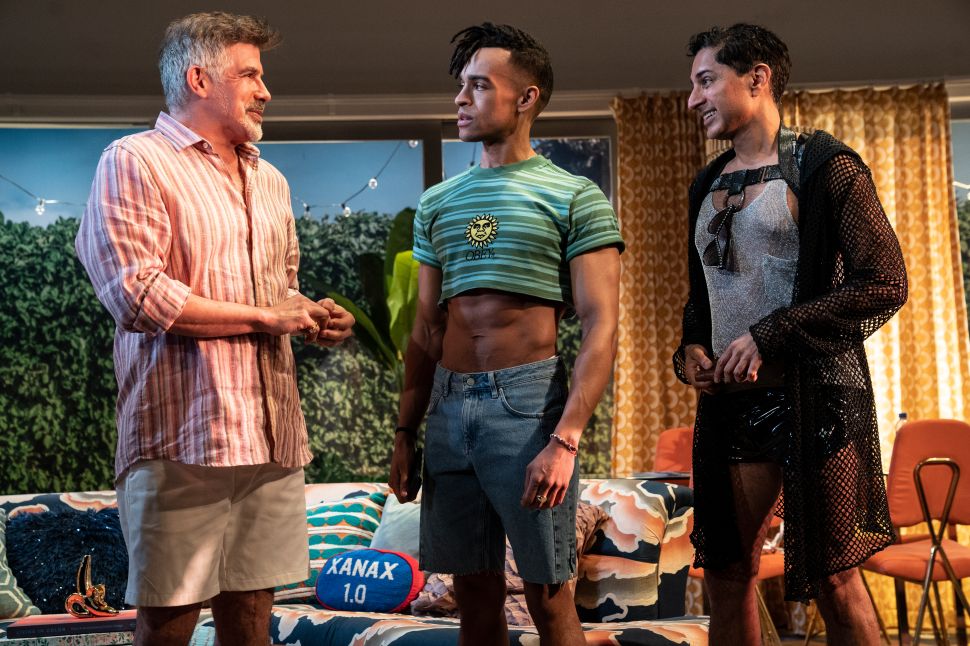