China is experiencing its worst Covid-19 outbreak since the beginning of the pandemic, driven by the highly transmissible Omicron variant. Chinese authorities have insisted on a so-called “dynamic zero-Covid” approach, which involves strict lockdown, frequent mass PCR testing and quarantine in designated facilities, in a bid to eradicate the virus in affected areas.

This approach was proven effective during previous Covid surges in China, including the original coronavirus’ outbreak in Wuhan in early 2020 and an outbreak in Xi’an driven by the Delta variant in late 2021.

But the effort to tackle Omicron has been in vain so far. In Shanghai, which has been under a citywide lockdown since late March, daily Covid cases remain at record high levels and have spread to dozens of cities and provinces. It’s estimated about 370 million people in China, more than the entire population of the U.S., are currently under some degree of lockdown. In Beijing, China’s capital city, local authorities launched mass PCR testing this week on its 22 million residents after dozens of cases were detected. Residents fear a lockdown may be next.

The short answer is that Omicron is simply too contagious to be stopped. Research has shown that Omicron BA.2, the dominant strain in Shanghai, is about 10 times more infectious than the original coronavirus and can essentially spread through airborne transmission. Even under strict stay-at-home rules, people could still contract the virus through bathroom pipes from neighbors, according to reports during Omicron’s outbreak in Hong Kong in January and February.

In Shanghai and other locked down cities, mass PCR testing, a key component of the government’s zero-Covid approach, actually makes it easier for the virus to spread by frequently having large crowds of people line up for tests. The logic behind mass testing is to identify every Covid case in a community and then quarantine them so that the chain of transmission is terminated. That method has apparently failed. Despite being locked down for a month, Shanghai still steadily reports around 20,000 new cases each day with no sign of the curve bending downwards.

Infectious diseases experts both in China and abroad have warned that the zero-Covid policy is neither sustainable nor necessary, particularly given the new strain’s significantly lower hospitalization and death rates than the original coronavirus. Even if it works temporarily, the same virus or a new strain of it will likely return once a society reopens.

“Shanghai has been locked down longer than four times the maximum incubation period of Omicron. New case data make no sense according to the law of infectious diseases,” Miu Xiaohui, a retired infectious diseases doctor based in Shanghai and a vocal critic of China’s zero-Covid policy, said on his WeChat platform on April 23.

Outside China, most countries have abandoned lockdown measures knowing that Omicron tends to cause much milder symptoms than previous Covid strains. They have instead focused on increasing vaccination rates and protecting high-risk populations such as the elderly and people with immunocompromised conditions.

Why is China insisting on this ineffective solution?

China’s health care officials have argued that the country can’t afford to to let Covid-19 spread because its limited health care infrastructure won’t be able to handle severely ill patients, even with Omicron’s low hospitalization rate.

Adding to the worry is the low efficacy rate of the Covid vaccines used in China. The only two shots available, developed by state-owned Sinovac and Sinopharm, were found to be less effective than Pfizer’s mRNA vaccine at preventing death in elderly people during Omicron’s outbreak in Hong Kong, where residents had access to both vaccines.

In mainland China, the government has resisted importing mRNA vaccines, for unstated reasons, despite BioNTech, which develops the Pfizer vaccine, having a partnership with Shanghai-based Fosun Pharmaceutical since early 2020.

A more important—yet rarely spoken—reason for the aggressive measures is President Xi Jinping’s political standing. In October 2020, Xi held a high-profile meeting in Beijing to declare victory over the coronavirus after keeping mainland China almost Covid-free for more than six months. He lauded the zero-Covid policy as an example of the Chinese Communist Party’s “institutional superiority” over other regimes. At a meeting with the World Health Organization earlier that year, Xi bragged about personally directing China’s fight against the coronavirus.

Giving up the zero-Covid policy at this time would bea humiliationfor Xi, who is seeking an unprecedented third five-year term as president during the Communist Party’s 20th National Congress in the fall. Meanwhile, angered Shanghainese are comparing Xi’s inhumane public health policy to the brutal Cultural Revolution during the 1960s and 1970s under Mao Zedong’s dictatorship.

How much longer will lockdown last and at what cost?

It’s unlikely to see China changing its high-level Covid policy, at least until Xi is reelected. Some extreme nationalists argue China should stick to its zero-tolerance policy for at least ten years, claiming Covid is part of a campaign of biological warfare launched against China by the West.

On a more practical level, existing lockdown measures in Shanghai and nearby cities will likely stay in place for weeks until Covid cases begin to drop. Meanwhile, outbreaks elsewhere could trigger a new round of lockdowns.

The economic cost is already staggering. Major investment banks have slashed projections of China’s full-year GDP growth from above 5 percent to 4.5 percent, according to a CNBC poll this week of nine banks, including Morgan Stanley, Barclays and Citi. That’s a full one percent below China’s official 2022 GDP growth target of 5.5 percent.

“China is too big a ship to change direction. It does not have the wisdom or capability to do it as neatly as Hong Kong or Taiwan,” Jin Dong-yan, a virology professor of Hong Kong University, said in January after the first Omicron case was detected in mainland China. “It is challenging and costly either to maintain it or to give it up.” 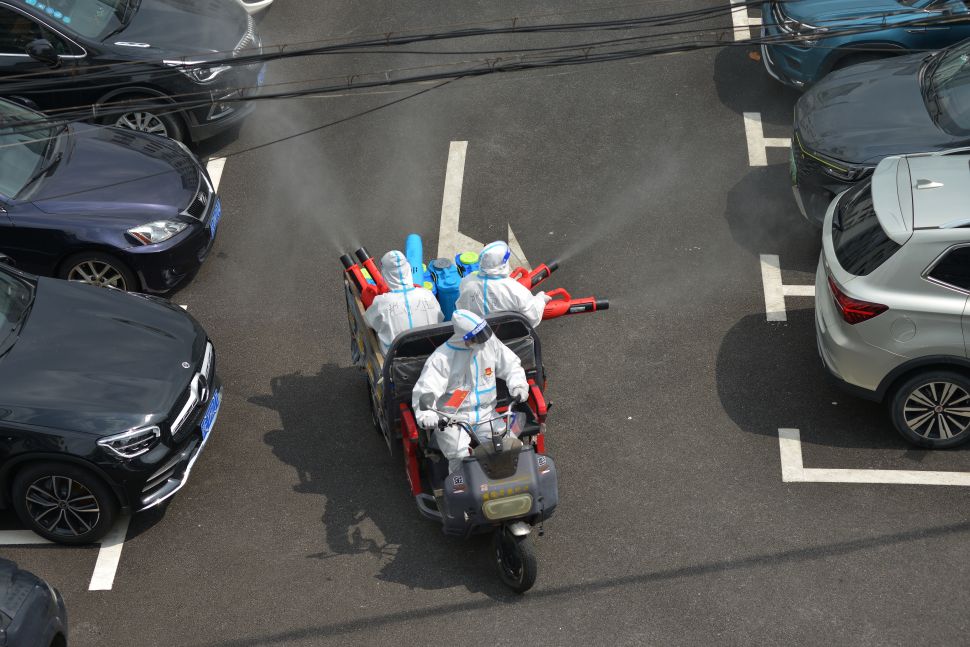