A traditional staging of Edmond Rostand’s Cyrano de Bergerac (1897) would normally bristle with weapons: swords on every Frenchman’s hip, then later rifles and deadly cannon as they march to repel Spanish invaders in Arras. The current, modish version at BAM lacks dangerous hardware—if you don’t count the microphones that characters clutch and spit rhymes into. Sleekly minimal, with maximal emotional punch, director Jamie Lloyd’s Cyrano is a weaponless marvel of language. For that, as I write days after ten people were shot on the subway in Sunset Park, I’m extra grateful.

There is violence in this Cyrano, to be sure. Broken hearts litter the stage. Our title character, the swaggering swordsman-poet played to the hilt by an incandescent James McAvoy, deploys battalions of words to wound or to woo. In the seduction department, there’s Christian (Eben Figueiredo), a handsome young soldier who falls head over heels for the headstrong, book-besotted Roxane (Evelyn Miller). Since Christian stumbles in speech when talking to Roxane, Cyrano pens billet doux to her on the boy’s behalf, eventually impersonating Christian under cover of darkness. Need I add that Cyrano himself adores Roxane, but it’s hopeless?

Why? Anyone who saw the Broadway revivals in 2007 or 2012, or the Steve Martin film knows: it’s the nose. Cyrano has a grotesquely long proboscis that renders him hideous. (In the recent musical film starring Peter Dinklage, Cyrano was treated unfairly due to height.) However, in this punk-rock adaptation of the verse drama, with a ferociously rhyming text by Martin Crimp, McAvoy avoids rubber prosthetics and internalizes the schnoz, as it were. With a shaved head, muscular bod poured into tight black jeans and t-shirt, McAvoy is All Snout: a walking, talking organ of exquisite sensitivity.

Lloyd’s staging technique is similar to the rehearsal-room aesthetic of his less-successful Betrayal: actors in dark street clothes, on an aggressively bare stage, cold, unflattering lighting and a tendency to face forward and deadpan. The flattening of theatrical (and emotional) space is even more pronounced at BAM. In the first ten minutes, actors squat on a low, white riser, delivering their lines straight out in rat-a-tat rhythms, an almost numbing monotony that’s broken when McAvoy (who has been sitting upstage staring into a mirror) barrels center stage enraged by a schlocky actor’s mauling of Hamlet. From that point, the tension barely lets up.

I’ve rarely seen a performer move with such scary intensity as the Scot heartthrob McAvoy, who charges and dashes and skitters over the space like a giant bull terrier in a slim-fit puffy coat. He’s a magnificent live presence, his Caledonian burr intensely seductive, switching from homicidal rage to flippant comedy in an eyeblink.

McAvoy’s verbal dexterity is almost obscene: speeding through Cyrano’s famous self-owns about his facial feature (“if style points you in a sexual direction / you might like to refer, Valvert, to my nasal erection”) and later slowing down to zen-like simplicity in his famous love speech to Roxane, which unfolded with the audience absolutely holding its breath, Crimp-Cyrano reducing desire to elemental, preverbal roots: “I’m speechless, speechless, all I can say is I want ― I want ― I want ― there is no poetry ― there is no structure that can make any sense of this ― only I want ― I want ― I want ― I want you.” For that scene alone, the show should move to Broadway and let’s polish a figurine for McAvoy.

This isn’t just a star vehicle, though. The diverse and highly talented ensemble is full of quirky, appealing actors doing fine-etched work. As Roxane, Miller runs hot and reminds me of a young Glenda Jackson: aristocratic yet passionate. Nima Taleghani’s cocky-cool Ligniere purringly drives his lines with a slam-poet’s assurance. And, as the villainous but ultimately pathetic nobleman De Guiche, Tom Edden finds notes of grace for even his rotten rich boy.

If you’ve never seen a Cyrano before, you’ll still get the basic plot, even if references to its 1640 setting produce a momentary mental blip (Cardinal Richelieu…right). More importantly, Crimp and Lloyd test modern attitudes on the, shall we say, problematic aspect of two men jointly wooing the same woman, and how that triangulation can lead to her justified outrage and a lingering, bi-curious kiss between the boys.

“I love words, that’s all. / And without pen and ink human history would fall / into a black pit / and there’d be almost no trace of it.” In Crimp’s refreshingly direct and profound lines, Cyrano explains why he talks so much, and why we keep listening. An old-fashioned romance fitted with modern clothing and locutions, this electrifying production proves that some things outlast tradition and history: the power of love and of language. 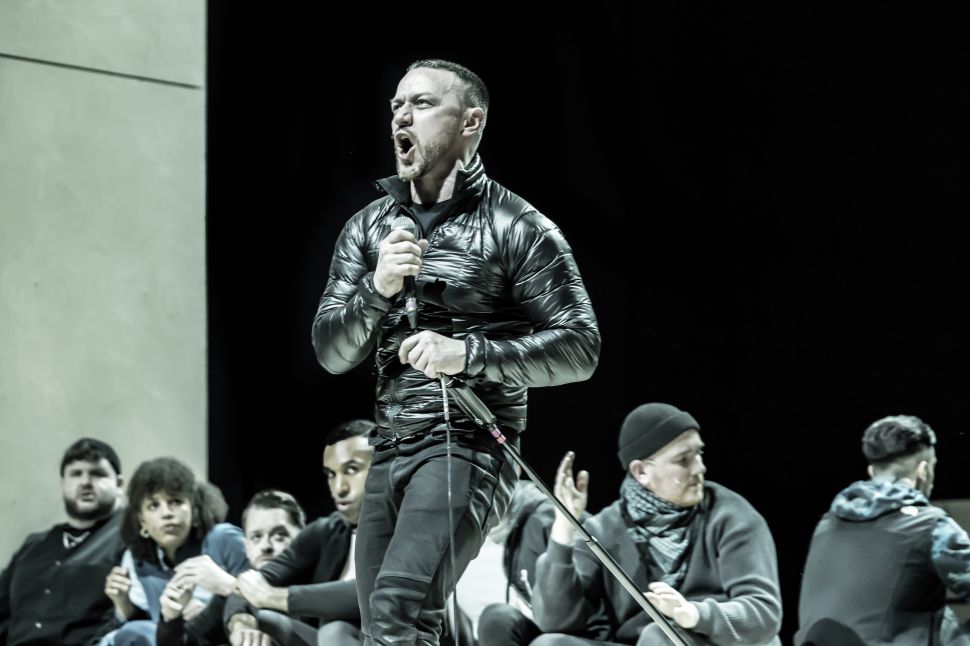