Since 1986, Lucille Lortel has also been an award, one that salutes excellence in New York’s Off-Broadway arena. Come this Sunday, the 37th batch of Lucille Lortel Awards will be handed out—18 in all, amid much ceremony—at the NYU Skirball Center. One of the recipients already known turns out to be one of Off-Broadway’s most fiercely faithful. As George Forbes, Executive Director of the Lucille Lortel Theater, reasoned: “It would have been hard for us to find a more deserving actor than ‘Didi’ O’Connell to receive a Lifetime Achievement Award.”

Didi did it all right, alright! The titian-haired, 68-year-old actress—otherwise billed as Deirdre O’Connell—spent five decades toiling contently and creatively in the low-budget vineyards of Off-Broadway. Her last vineyard was the Vineyard Theater in Lucas Hnath’s 2020 Dana H. That got her an Outer Critics Circle Award and a Lortel for Outstanding Solo Performance—plus a Special Citation from the New York Drama Critics’ Circle. It transferred uptown to Broadway’s Lyceum.

Decades literally separate O’Connell’s three Broadway appearances. She debuted there in 1986, playing Mollie Malloy, the wanton floozy who leaps out of a pressroom window, in a two-month run of The Front Page at Lincoln Center. In 2012, for an unexpectedly short one-month run at the Longacre Theater, she was mom to basketball’s Larry Bird in Magic/Bird. Then—last October and November—as Dana H., she said not a word but lip-synched 75 agonizing minutes to a recording.

This recording was of a woman (the playwright’s mother) recounting to a priest the five months of abuse she endured from an ex-con who abducted her when she was trying to bring him back from suicide attempts as the chaplin of a hospital. The docu-drama retelling of this event was wholly the playwright’s idea.

“Lucas saw me in Maria Irene Fornes’ play, Mud, at the Signature 1001 years ago,” O’Connell immodestly estimates, “and he was struck by how much I reminded him on a visceral level of his mother. He and the director, Les Waters, knew what the piece should be and had workshopped it a bit before they came to me. They sat down with me and described what they wanted to do. I had no idea whether I would be able to do it, number one, or how claustrophobic and terrible I would feel doing it, number two. I had to dive in without ever having seen anybody do it and without ever knowing I’d actually enjoy the feeling of it. I couldn’t tell. I knew I was going to have to do the labor of learning it before I knew whether it was something that I would like performing at all.”

Learning the text was no day in the country—or month, for that matter. It was “several months,” by her count. “I put the dialogue on a page—that’s how I’m used to learning it—then I learned it in my ear. The interesting, horrible, sorta neurological fact was I could spend a day learning two pages and then spend a day learning that equivalent by ear, and, when it came time to take everything and put it together, they would cancel each other out, shatter each other in my brain. I’d be left with nothing and think ‘This is an impossible thing.’ Then, gradually, my brain learned how to do it.”

A lip-synch coach (and sometime magician), Steve Cuiffo, helped her through it. “He was like a singing coach. He would sit patiently and listen to me do it—a lot—then he would point out really specific problems in trying to catch this lighting in a bottle. It was a million tiny technical things.”

O’Connell was Dana H. at four different venues—in L.A., Chicago, and finally New York at the Vineyard and Lyceum, each gig punctuated by periods of forgetfulness and arduous relearning.

She admits she’s amazed Dana H. made it to Broadway. “That didn’t seem possible. It didn’t even seem like a goal. Getting to the Vineyard was the goal, but, in the context of the pandemic and stopping for a year and a half, it was a delicious way to finish it. I didn’t feel like I was going back to something. I was walking straight into something I didn’t know anything about.”

The experience of this play has left a lovely afterglow with her, no doubt from the fact she met a challenge with a triumph. Such is the stuff that triggered the Lortel Lifetime Achievement prize.

Belatedly, she realized how much she loved Dana H. “A couple of days before we closed, I thought my heart would literally break and explode in my chest from sorrow or from the overwhelming fear of letting go of it. We can always say, ‘We’ll probably get to go to London with it,’ so we didn’t have to think this is the final time. I don’t think I could bear to think that.”

Four months on Broadway out of 50 years of theater might frustrate most actors. Not O’Connell. She’s comfortable with the loneliness of the short distance runner. “I’d much rather do two new plays in a year and get to work on the development process on a new piece of writing than do a long run on Broadway. That isn’t the life I want—to get to Broadway and make a lot of money.

“I don’t like doing things for a really, really long time. The idea of just signing a contract that would go for a year or two and know that I would be just doing that same thing scares me. I’ve managed to be comfortable not having very much money. I still have a rent-stabilized apartment, and, somehow, I’m resigned to it in a funny way. It was never my goal. Honestly, if I were a singer or a dancer, I would probably feel very differently. That would really be fun.”

She had no problem signing up for a limited run of The Front Page because she could see the light at the end of the tunnel. “It was a beautiful opportunity to be with all of these character guys who had been doing this sort of thing for a million years and could do it perfectly. Plus, I got to share a dressing room with Julie Hagerty. We did a Caesar Salad Tour of the Lincoln Center area. Every matinee day, we’d try another place. There were great Caesar salads in those days.”

The rub came with Magic/Bird, which had hopes of a long run. “Do you know what a scaredy-cat I am? I could not bring myself to sign a contract for a year, so I took a really big cut in pay.”

O’Connell’s fondest memories are located Off-Broadway and in regional theaters.

Another abiding love is Circle Mirror Transformation, which she did at Playwrights Horizons in 2009. “I still think of that dressing room as one of the happiest homes I’ve ever been in. What a combination of actors! We were all equally invested and scared and happy. That was a beautiful family. The thing about that dressing room—I always think, ‘Why can’t we just be back in that dressing room?’ Sometimes, we’ll get together and have drinks—but it’s not like that time between half-hour and when you go on. You’re in a different state of mind. You can’t capture it.”

There is no doubt about it: it’s the actor’s life for O’Connell. She loves and exudes it. “I do! I do! I guess that’s one of the things that I have really had to think about, getting this crazy thing that has the words ‘Lifetime’ and ‘Achievement’ on it. I don’t quite—really, truly, and no fake humility about it—understand the achievement, because so many people achieve this. You just put one foot in front of the other. And there are so many actors out there who do that.

“I sometimes feel like I’m a petri dish. What would it be like, if everything you ever learned about life, you learned from being in plays? It’s true. I’ll run across a word, and I’ll think, ‘Why do I know what that word means?’ And then I know. ‘Oh, yeah. Because I had it in a line one time.’” 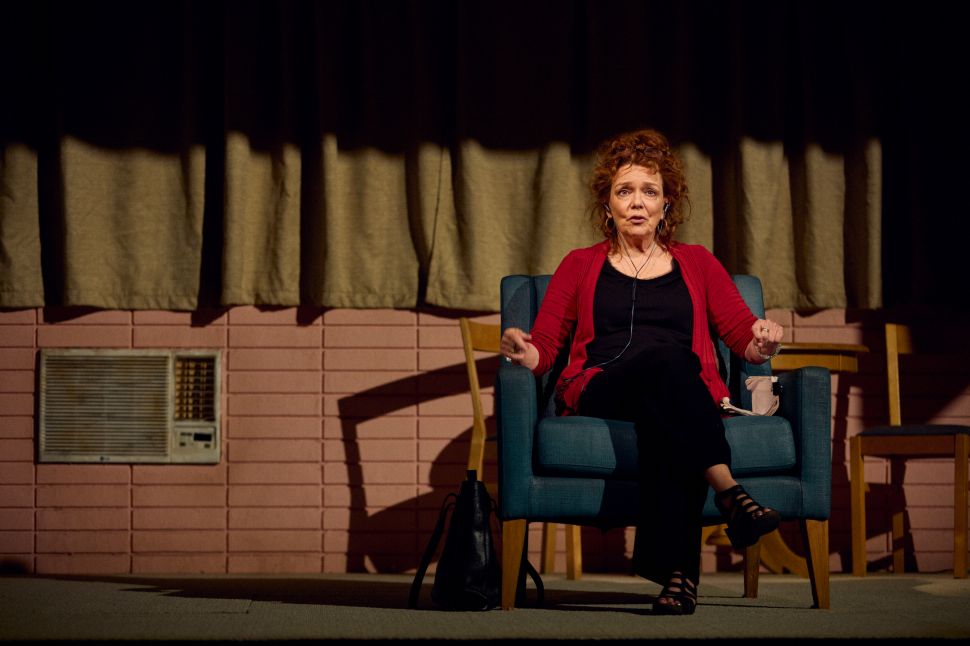