Drone delivery has finally arrived, at least on a small scale. Packages containing lightweight products, such as medicines and COVID tests, are being dropped off at some limited locations, years after consumers were first teased with such a service.

Back in December of 2020, the FAA issued rules for companies wanting to use drones for deliveries paving the way for Amazon and others to take to the skies. Since then, Walmart has been using drones for deliveries in Arkansas and in North Carolina while Wing , a unit of Google owner Alphabet, has been delivering a host of products in Virginia and Texas from coffee to Mexican food to medications from Walgreens. Amazon, the company that kicked off the drone delivery craze in 2013, is still testing its devices.

Currently none of these companies are fully certified by the FDA to fly anywhere in the country, according to the Wall Street Journal. And per FDA rules drones, or unmanned aerial vehicles (UAVs), must have a human controlling or monitoring them.

All seems good so far, but it’s not clear what will happens when a behemoth like Amazon, which promises to eventually deliver some 500 million packages by drone a year, takes flight. The company plans to begin its drone deliveries in the fall.

Some experts are predicting disaster, with the sky darkened by the hordes of drones it will take to accomplish all those deliveries. That’s mainly because the current iteration of the flying robots can’t carry much more than four pounds.

“The problem to me, the real show stopper, is the fact that these drones can carry only three to four pounds,” said Mory Gharib, chair of the aerospace department at California Institute of Technology and director of the university’s Center for Autonomous Systems and Technologies. “As you can imagine it would take thousands of drones to carry those little packages. There will be traffic issues and a danger of them crashing into one another—and into people’s houses.”

Drone crashes have already become a problem for Amazon, even though its delivery service isn’t yet off the ground. One even touched off a forest fire.

Gharib doesn’t see a future for drone deliveries, especially in cities and other densely populated areas, until the flying machines are designed to carry heavier loads. “Imagine a drone carrying, instead of 4 to 5 pounds, 25 to 30,” he said. “Then, in one mission, a drone could make deliveries to several customers.”

That’s not out of the question. There are companies that are currently working on UAVs that can carry heavier loads, anywhere from 30 to 75 pounds, Gharib said.

Others, however, see no future, ever, for drones in urban areas. For example, “in dense cities like New York, an overwhelming percentage of all goods are delivered via trucks,” said Carlo Ratti, a professor of urban technologies and planning and director of the SENSEable City Lab at the Massachusetts Institute of Technology.

“Approximately 25,000 delivery trucks and commercial vehicles move into, around and out of Manhattan every day,” Ratti said in an email. “To replace even 5 percent of those vehicles by drones would mean 1,250 UAVs dotting the skies. I am not sure it is safe or practical.”

The situation is different once you get out of the cities, Ratti said. “In sparsely populated areas UAVs could play an important role,” he added. “Drones could be deployed more effectively as a means of delivery in places where road infrastructure is lacking.”

Ratti points to the example of Africa, where drones have been bringing much needed medical supplies to remote areas. Zipline, a company which recently partnered with Walmart to help with deliveries in an Arkansas location, had delivered medications and blood for transfusions to hospitals in African countries for many years prior.

Another problem with drone deliveries in cities is the altitude at which they are allowed to fly, Ratti said. “In the U.S., under the regulations of the Federal Aviation Administration, 400 feet (about 122 meters) is the highest a small drone could fly to avoid interference with other aircraft,” he added. “This would naturally be a problem in cities filled with tall buildings (today drones are banned in New York City altogether) which also have the highest demand for delivery services.”

And then there is the weather. “A common thunderstorm can ground light aircraft with a mass many times that of a drone,” Ratti said. “Air movement just a few meters per second could be enough to send small drones bumping into buildings or falling from the sky.” 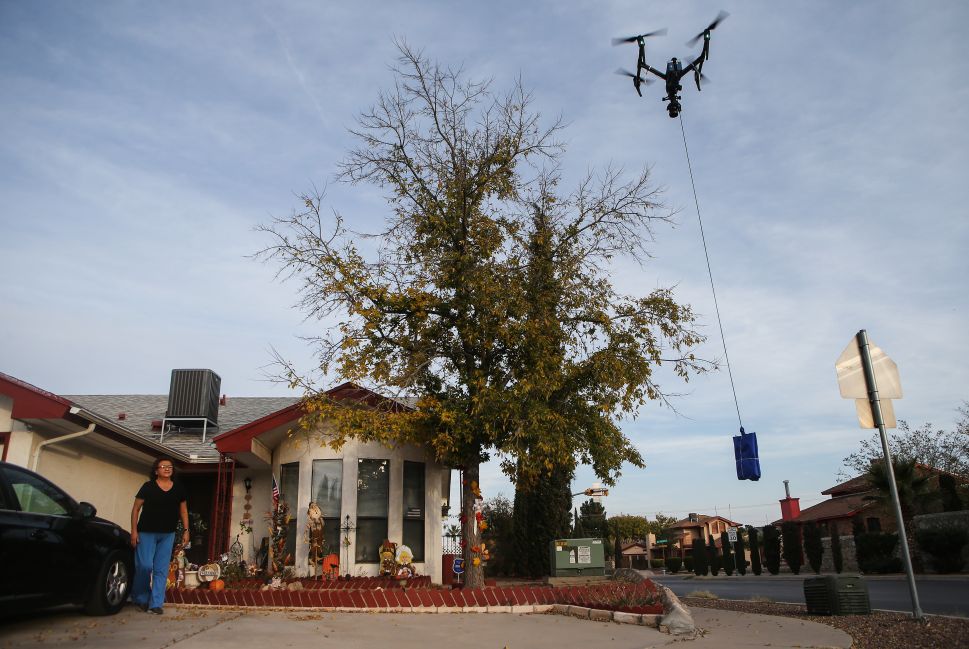