Director Jacques Audiard is known for wildly original genre thrill rides like Read My Lips, A Prophet, Dheepan, and The Sisters Brothers. His films — stocked with underworld thugs, prison kingpins, fight-at-all-costs immigrants, and wild-west assassins — are mythic in scope, and their jolting stories aren’t known for their relatability. Even his most overt stab at romance, Rust and Bone, starred Marion Cotillard as a double amputee who lost both her legs in a killer whale mishap.

So Paris, 13th District — a lusty, searching look at romance through the lens of an urban love triangle — is something of a departure. It’s also unabashedly sweet, even about our tech-savvy lives. “Imagine yourself on the sidewalk and you’re looking at your cell phone, and there’s all these other people around you and they’re looking at cell phones,” Audiard told Observer last month. “And you’re going to a date, and they’re going to dates, all around you. Either they’re arranging for an amorous encounter, or they’re on their way to one. It makes the city really beautiful!”

It also makes the city fraught, as one woman goes on a molly-fueled Tinder bender while another keeps getting mistaken for her pornographic dopplegänger. They both end up sleeping with the same man, whose carnal appetite doesn’t quite sate his own emotional hunger. At one point, he even goes cold turkey. “I’m on a sexual sabbatical,” he declares. It doesn’t last.

Modern love seems like a surprisingly down-to-earth subject for the eclectic Audiard, but the director is a longtime fan of French New Wave auteur Eric Rohmer, who made a career of relationship dramas that were simply told but complex in nature. “It’s a way of preserving that idea of the amorous discourse: speaking of love in a new way, just reflected in a new way,” Audiard explained. He and Lucie Zhang, one of the film’s stars, were here for Film at Lincoln Center’s Rendez-Vous with French Cinema, where Paris, 13th District made its New York premiere. It was a homecoming of sorts for the film, which is based on three short stories by graphic novelist, and Brooklynite, Adrian Tomine. “I’m a little bit afraid because he’s going to be at the screening tonight,” confessed Audiard. “When adapting someone’s work, it’s like the old expression: the translator is a traitor.”

Audiard shouldn’t have worried. The film intertwines Tomine’s stories—“Hawaiian Getaway,” “Amber Sweet,” and “Killing and Dying”—in loose, inventive ways that still honor the material and capture the author’s quietly beguiling emotional depths. A friend of Audiard’s had recommended that he read Tomine, and the director sparked to the graphic novelist’s works immediately. But he also wanted to collaborate on adapting them for the screen, and insisted on using women screenwriters, enlisting Léa Mysius as well as the help of his celebrated filmmaker friend Céline Sciamma (Portrait of a Lady on Fire). “I wasn’t familiar with Tomine’s stories, but Céline knew them by heart,” he explained. “To tell you the truth, now when I see the film, I really have a hard time distinguishing which are the parts that came from Tomine and which are ours.” He laughed, then added: “Perhaps Tomine will remind me at tonight’s screening.”

What makes Paris, 13th District so affecting is that these aren’t fresh-faced naïfs ping-ponging through life. They’re highly educated, emotionally intelligent singletons in their early 30s. Camille (Makita Samba) is a high school teacher who’s working on his post-doctorate degree. Nora (Noémie Merlant) is getting a law degree at the Panthéon-Sorbonne. But they’re both restless, changing their professional trajectories mid-film and ending up working together temporarily at a real estate office.

Emilie (Zhang), too, is overeducated and adrift: she has a degree in political science but opts to work at a call center, a dead-end job that fills her with bemusement and contempt. She also lacks ambition, especially in romance, eschewing the hard work of emotional vulnerability for the quick rush of app-fueled casual sex. “It’s the danger of being alienated by technology if there isn’t just a little bit of self-control,” Zhang explained. “But it’s cool to have all those technologies. I don’t know, I’ve never known that ‘ancient period’ before all that!”

Audiard’s generation knows that period all too well, and the director points to Rohmer’s classic 1969 film My Night at Maud’s as an even more vintage era. “Even then, his characters seemed not of that time,” he said. “Rohmer couldn’t care less about what it is to be modern. He’s writing stories with characters who are really outside of any defined period of time.”

For Audiard, what makes Rohmer so timeless—and so perpetually relevant—is conversation. “The one thing between the heart and the body is the power of dialogue, a romantic discourse,” he said. “You have the power of speech. The characters are talking, they don’t stop talking, they like to hear themselves talk. And in a way, by doing so, it becomes more eroticized.”

In fact, Audiard’s sex scenes are defined by dialogue. “Even in all of the love scenes, they never stop talking,” he said. Talking is what helps Nora get through the fact that people in her grad school classes keep thinking she looks like a sex cam girl named Amber Sweet (Jehnny Beth). Nora becomes so obsessed with their similar appearance that she tracks down Amber and befriends her over Skype. The two strike up a confessional rapport that’s arguably the film’s most tender relationship—and notably it blossoms without any physical interaction between them.

For an Audiard film, Paris, 13th District also has a ton of sex—something he hasn’t really filmed before with such graphic abandon. “I’m not completely comfortable with that,” he admitted. “The same is true, really, with scenes of violence. Not to equate the two at all, but I link the two together because in movies they’re both really fake.”

So Audiard relied on intimacy coordinators and entrusted his actors to come up with their own blocking. “We were directing ourselves,” said Zhang. “He wanted to see how naturally we would reach something if he didn’t really give us any indication.” The results are explicit moments that don’t feel exploitative—not the predictable male gaze, but what Lucie describes as a “multi-gaze” that feels more equitable.

But what really makes Paris, 13th District so contemporary is its casting—Audiard has long preferred to highlight different ethnicities and cultures in his filmmaking by shaping stories around, say, a French-Algerian, in A Prophet, or a Sri Lankan family, in Dheepan. “I try to bring in new faces, people speaking in different languages,” he said. “This is really what represents France: this kind of diversity.” And in its sensual, hyperverbal, blithely quotidian way, the result couldn’t be more cinematically Gallic. 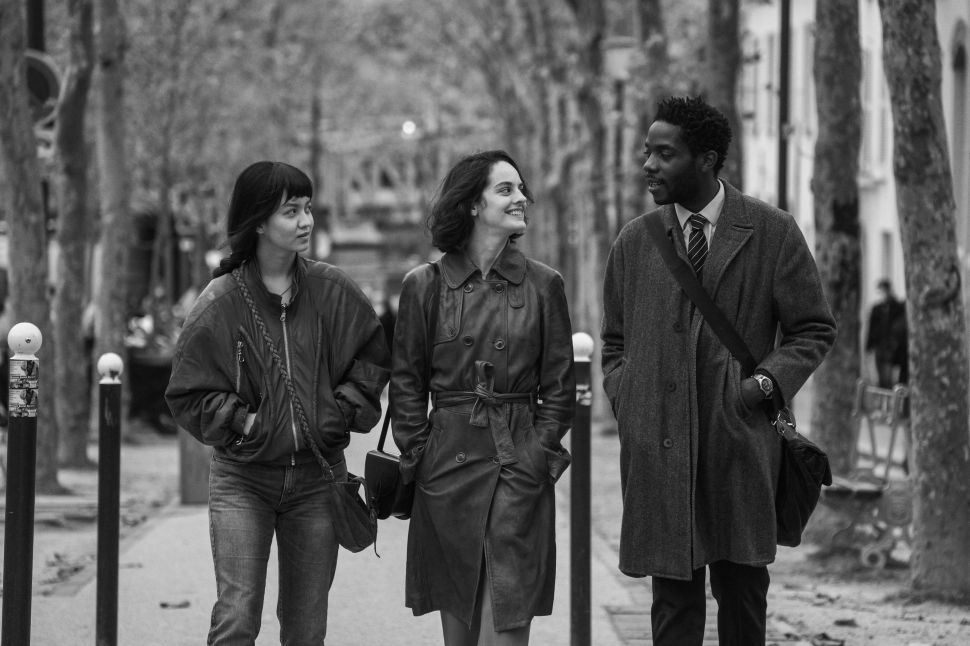