The world is always ending. Humans are excellent at finding ways to escape this end—we go west, we go to the moon, we go further through time and space, until the end can’t reach us. Yet the further we go, the more we lose. Stretching across time in her new novel, Sea of Tranquility, Emily St. John Mandel tells the same human story through four different characters living hundreds of years apart. Already an experienced writer of pandemic apocalypse fiction, including the widely loved novel Station Eleven, Mandel now seeks to answer the infinite human question: if the world is always ending, how do we live in the face of it?

Sea of Tranquility follows characters in the past, present, and future, all of whom encounter a pandemic in their own era. We meet Edwin St. Andrew in 1912, when he travels from England to Canada a few years before the influenza. We follow Mirella, who readers might remember from Mandel’s most recent novel, The Glass Hotel, living in January 2020 just before COVID-19 becomes a real concern in New York City. We meet Olive Llewellyn, who was born in the moon Colonies but is on Earth in 2203, on the edge of awareness of a new SARS-12 pandemic. Last, we meet Gaspery-Jaques, born in the future hundreds of years beyond any of these characters, but tied into the past more directly than any of them could think possible.

Readers of Mandel’s other novels will remember her talent for subtly interweaving disparate narratives, and Sea of Tranquility rises to that area of expertise. Mandel connects her characters both literally and figuratively—partly in a sci-fi mystery that unfolds across time, and also through their humanity in common themes of life, sickness, death, travel, art, and ultimately wondering what it’s all for.

One of the human quests common across all four narratives is the urge to go further, to push beyond, to fill empty space with something new. All of Sea of Tranquility’s protagonists are travelers: Edwin travels to British Columbia on remittance to start a new life, Mirella visits New York City to find out what happened to her friend Vincent, and Olive makes her way across North America on a book tour for Marienbad, her pandemic apocalypse novel. Gaspery, living furthest in the future, is in the unique position of uncovering secret, newly invented time travel technology.

Mandel suggests perhaps we travel so far out of fear. “At the end of Earth there will be actual, literal annihilation, hence the colonies” that by the year 2401 have been built on the moon and beyond. People choose to streak out from Earth to the stars “because we’ll have to,” as the president of China said, “at the press conference where construction on the first colony was announced, ‘eventually, whether we want to or not, unless we want all of human history and achievement to get sucked into a supernova a few million years down the line.’”

Mandel’s characters want to avoid the end at all costs. So in the context of the subconsciously ever-looming end of the world, it’s interesting that Mandel pushes her characters to consciously investigate what is really real in their lives—they consistently wonder about truth, and they find it in love.

Olive’s feared loss of her daughter Sylvie, for instance, leads Olive to prioritize certain things in her life. When Olive visits Earth, she discovers burrs on her socks after a walk, and she thinks “they could’ve passed for biotech, but when she pulled one apart, she saw that it was real. No, real isn’t the word for it. Everything that can be touched is real. What she saw was it was a thing that grew, a castoff from some mysterious plant they didn’t have in the moon colonies, so she wrapped a few of them in a sock and carefully stowed the sock away in her suitcase to give to her daughter, Sylvie, who was five and collected that kind of thing.” The burrs are real because they are alive, and because someone Olive loves would love them, too.

Gaspery, in the year 2401, thinks of his late mother, and the simulation theory used to talk about: the idea that nothing around us is real. Gaspery still latches onto the core of reality in human life as he ponders this. “We are living in a simulation,” Gaspery tells himself, to test the idea, “but this fell so far short of, well, of the reality, for lack of a better word. I couldn’t convince myself. I didn’t believe it. There was a scheduled rainfall in—I glanced at my watch—two minutes. I stepped out of the trolley and walked very slowly, on purpose. I’ve always loved rain, and knowing that it isn’t coming from clouds doesn’t make me love it less.” The rain may be obviously simulated, but Mandel pushes us to look deeper—how Gaspery feels about the rain is the only thing that matters.

Mandel masterfully connects characters’ observations and senses within any given moment. When someone leaves, they fade into the twilight. In a moment of horror, the air is cold. Mandel’s descriptions conjure both realism and poetry, especially when parts of the novel speak directly to her modern readers’ experience of the pandemic.

“We knew it was coming,” is the most famous line from Marienbad, Olive Llewellyn’s pandemic apocalypse novel (a near-exact fictional stand-in for Station Eleven). Olive, like Emily St. John Mandel, has written a novel about a pandemic and is then thrust into one.

Still, it finds Olive in the way it finds anyone. “Have you been following the news about this new thing, this new virus in Australia?” a cab driver asks Olive. “‘Kind of,’ Olive said, with her eyes closed. ‘It seems like it’s been fairly well contained.’” As Olive writes in Marienbad: “We knew it was coming, but we didn’t quite believe it.”

It’s the same in 2020, both in fiction and in the lives of Mandel’s readers. The novel delivers familiar sentiments that feel chilling in retrospect: “Hope you’re not offended,” a man says to Paul Smith, Vincent’s brother, after one of his concerts. “I don’t think your hands are dirty or anything. I’ve just gotten really into Purell since this thing in Wuhan hit the news.”

All three protagonists, excluding Gaspery, live during a pandemic. Edwin encounters the flu in 1918, Mirella lives through COVID-19, and the SARS-12 pandemic finds Olive in the future. Olive, as a fictional stand-in for Mandel, is able to speak as an author with expertise in pandemic storytelling.

Olive delivers talks on the topic, on illness and apocalyptic fiction. “‘The truth is,’ Olive said, behind a lectern in Paris, ‘even now, all these centuries later, for all our technological advances, all our scientific knowledge of illness, we still don’t always know why one person gets sick and another doesn’t, or why one patient survives and another dies. Illness frightens us because it’s chaotic. There’s an awful randomness about it.’” Olive knows that “our anxiety is nothing new. When have we ever believed that the world wasn’t ending? ‘What if it always is the end of the world?’” she asks her audience.

Fans of Station Eleven and The Glass Hotel are sure to love Sea of Tranquility, not only because of the familiar characters and elements of story that appear in this new novel. It feels like a natural continuation or revisiting of ideas in Station Eleven, certainly, now that all of Mandel’s readers have been through a pandemic firsthand. Sea of Tranquility is also for anyone who wants to think about what the end of the world means, and how our lives matter in the face of it.

Across centuries and amidst grief, Mandel arranges her story to suggest that perhaps life is just time. Her characters know this unconsciously, deep within them at the core of their humanity. As they travel and work to find something “real,” they gravitate to rest. Edwin stays at a boarding house for weeks and learns to paint as a way to put off the rest of his journey. Mirella separates herself from the bustle of the city to sit on a park bench and grieve. Olive finds peace and even joy at home with her daughter. And Gaspery, after everything he’s learned and everywhere he’s traveled, through space and time, wishes for a simple life. “This is the strange lesson of living in a pandemic: life can be tranquil in the face of death.”

They’re all looking for something, even if they aren’t yet sure what it is. As Edwin wonders, while contemplating whether life as a farmer would be a good fit for his future, “What do you actually do with the fields, once you’ve dug them up? What are you digging for?”

This book, remarkably, holds the answer. Look for it in the moments of quiet, of tranquility, of peace in a moment of time. 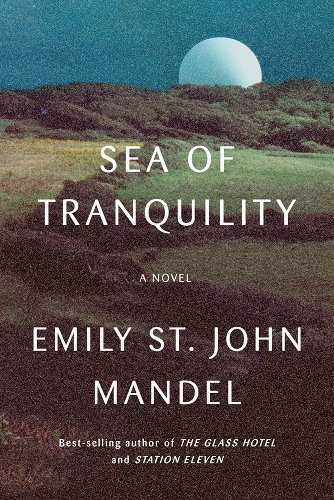