For The Northman, director Robert Eggers had no desire to make just another historical epic featuring Viking warriors pillaging, fighting, and dismembering one another. What he wanted was the most historically accurate Viking revenge saga ever put on film.

Eggers’ previous films—2015’s The Witch, set in a 1630 New England Puritan colony, and 2019’s The Lighthouse, set in the 1890s—thrive on their attention to detail, and a big part of that is the meticulous historical accuracy of costume designer Linda Muir. The Northman marks their third collaboration, but while the first two were art-house favorites, The Northman super-sizes both the budget and scale: 120 original designs were made for the major players and close to 1200 crowd costumes. Each outfit—from the shaggy cloak worn by Claes Bang’s character, Fljönir the Brotherless, seemingly stitched together from the hair of his fallen enemies, to the marvelous and mystical costume of Björk’s Seeress—are all carefully studied and designed.

Observer talked to Muir about the extensive research process she undertook for this historical epic, what went into designing the film’s most mesmerizing looks, and the costume that made her heart skip a beat once she saw it in action.

You’re known for doing a lot of research before you even begin designing. When did Robert Eggers approach you and when did you start prepping for what would become a massive undertaking?

Oh months and months and months before. There was a lot of reading and getting information under one’s belt before designing. There was just so much to absorb and consider when it came to how to depict these characters in a culture that is very specific. As the script developed and became fuller over time I had conversations with Robert about the characters’ backstories, and he would draw in information from the [Icelandic] Sagas, which I was also reading, but definitely not as much as he read. Then I would glean from the Sagas very specific and fabulous pieces of information that Robert was also aware of such as that characters, as a sort of foretelling, would wear dark cloaks before there was a murder. The beliefs that people had were so different and they lived with them every day, so I wanted to depict their sense of economy, ability, ingenuity, and their desire for beauty.

Since there aren’t many surviving examples of clothing made during the time period the film is set in, how did you figure out how to go about designing costumes?

There are ideas around pleating and depictions of clothing on tapestries and carvings. If you start to read what archaeologists believe and combine that with how you would practically make something, you can start to figure out how a piece of wool needs to be in particular dimensions in order to create that image I see in those tapestries. Neil Price [professor in the Department of Archaeology and Ancient History at Uppsala University, Sweden, an expert on Viking Age Scandinavia] was an incredible asset in terms of helping me understand the Viking mindset and was very surprised by the questions we asked. There are also passionate people who are contemporary Viking men and women who create jewelry and clothing who are very aware of all of the archaeological finds, so when you talk with them, they give you pieces of information that you can plug in here and there and then suddenly, it starts to make more sense. There are big differences in opinion within those communities about certain things, so we would ask questions and then make decisions about what to include.

This film has over 120 original costume designs and almost 1200 crowd costumes. You’ve been a working costume designer for over 45 years—is this the biggest project you’ve ever been a part of?

Design-wise, definitely. When Robert and I talked about what the desired aesthetic would be for the film, I was pretty sure that we weren’t going to be able to rent very much, and when I traveled to the various rental houses at the beginning of prep my suspicions were correct. So we were really in a situation of figuring out how to make this massive amount of clothing. Our costume coordinator Louise Cassettari was constantly shifting to figure things out and finding a supply of plain woven wool for the massive number of characters we had to dress. Then there was dyeing and over dyeing, and then distressing and distressing. Our costume crew in Northern Ireland was astonishing and I think the Slavic village really benefited from the amount of mud that everybody was wading through.

I want to get into the look of specific characters and I have to start with Bjork’s character, the Seeress.

Her costume is very intricate. In the research for the Slavic village, I read that the word for embroidery is the word we use for writer. It was very important for women to embroider the garments for themselves and their families, which can be seen on their chests, sleeves, wrists, and hands. It’s a call to the gods for health or prosperity or fertility. We did hand embroidery for Olga and Amleth’s costumes [the characters played by Anna Taylor-Joy and Alexander Skarsgård], as well as for a group of villagers that surrounded them, and then we did machine embroidery for the crowds. We then took photographs of that embroidery and then screened it so that the Seeress is completely covered in embroidery because she had to be considered the über writer.

I played around with what colors to use for her because in the daylight you see the Slav villagers wearing garments with red and black embroidery, and with cinematographer Jarin [Blaschke]’s lighting—which was this beautiful moonlight effect from above—it just would have gone to black and it wouldn’t have any detail at all. So we ended up with pinks, grays, and peachy colors, which all read beautifully in that light. If you see her in a colored photograph, it’s not the colors at all that she appears on the screen.

Her necklaces are these incredible chunks of indigo blue and amber and coral, and she has these fantastically huge temporal rings, which hang from her headband. Women in Salvic villages had different temporal rings that identified what village a woman came from, so the notion I went for the character was that wealthy villagers might give her something for private readings. The cowrie shells and bells in front of her missing eyes were used to ward off evil spirits, as was her skirt, which is made of a massive number of tablet woven Slavic belts that are stitched together.

I read that initially Eggers wanted to go with wheat for the headdress she wears but you went with barley instead. Why barley? And why did you go with a Ukrainian inspired design for it?

As I recall wheat wasn’t a crop that was local—I remember that as part of the research process—and also barley had a better look: it has a more oval seed head, and is the same color dried. It was also because of the area that we landed on. When I came back to Robert with the research I told him, “We really need to decide on a very specific area in order for me to be able to create clothing that would be authentic.” Also [production designer] Craig [Lathrop] needed a certain area in order for icons to exist, and Robert needed a certain area for river access, so the area that we all landed on is some part of Ukraine. Headdresses are still used in celebrations, they’re much more attuned with flowers and are more festive, we wanted ours to look more connected to the earth and the culture that she was so much a part of.

Another one of my favorite costumes is the cloak Claes Bang’s character, Fjölnir the Brotherless, wears when he assassinates Ethan Hawke’s King Aurvandil early in the film. What went into designing that piece?

That’s called a vararfeldr and that is perhaps the most authentic piece of Viking clothing in the film. I came across this image, that was just gnarly and crazy and thought to myself, “What is this? This is just too amazing.” The varafeldr’s were woven on a vertical loom and they used the long and the short tog and floss of Icelandic sheep, they were used in the Viking age as a commodity, so like metal and even slaves, varafeldr’s would be sold or traded because they were incredibly warm, just shakes right off them as opposed to hides, which even when treated get stiff. Ours was made in Norway and because of Covid and the furlough, we had enough time to actually make an authentic one.

When I was trying to figure out where in the film there would be a great use for it, I thought, “Oh, in the disguise he dons for the ambush.” Robert and I thought: he’s stolen a helmet from one of his raids and on top of all of that he’s wearing this crazy wookie-like shimmying and shaking cloak. He just looks ferocious when he rides in. I had a notion that we would use the varafeldr at the end, when Gunnar [Elliot Rose] jumps out of the bed box and stabs Amleth, but the blocking in the room just wouldn’t accommodate that, there just wasn’t enough time, the idea was for it to be a complete circle, that the varafeldr was what Flöjnir was wearing when he killed Amleth’s father and that’s what Gunnar would be wrapped in when he’s killed, but you can’t do everything.

What can you tell me about the Valkyrie, who appears very late in the film but has this striking look?

In the Sagas, female characters are often depicted as being equally gory as the men, the Norns [supernatural creatures who determine the course of humans destiny] are particularly ferocious,  so when Robert and I were talking about the Valkyrie, I was encouraging him to make her ferocious, and that’s when he came back with the notion of the filed teeth.

For her armor, I found a tiny piece of metal in a drawer in Rome during one of our expeditions, and rather than having it heavy like male armor, we tried to make it more ethereal—not like jewelry, but more delicate, that’s why her chainmail has gold banding. Her cloak is this glorious red wool lined with goose feathers in three sizes and it gave it this incredible weight and movement. When I saw it on the rider double, my heart just leapt. It’s a very special costume that one. 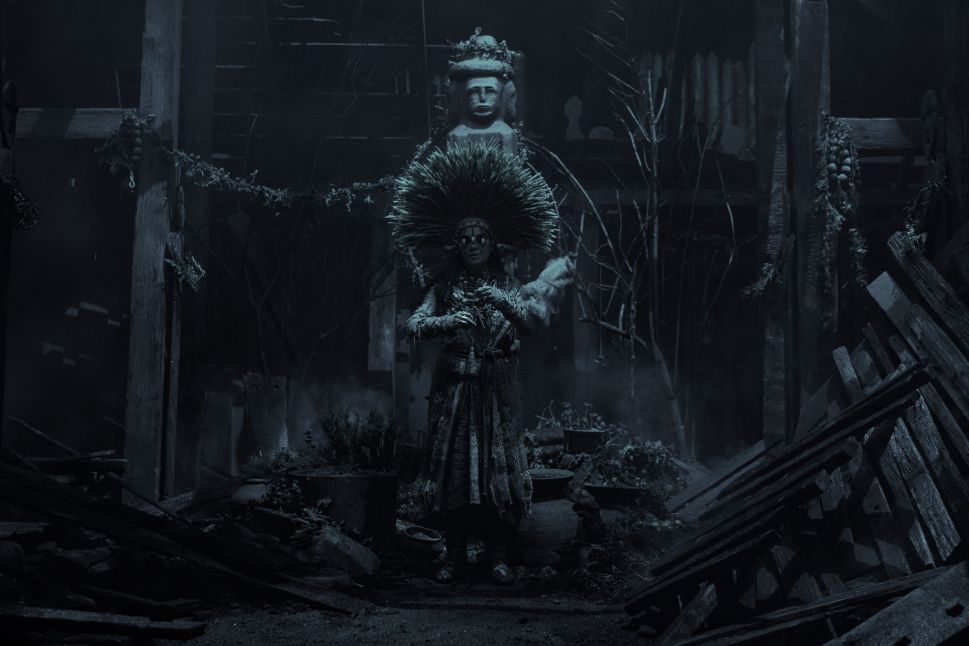