Beanie Feldstein as “Fanny Brice” during the first preview curtain call for the revival of “Funny Girl” on Broadway.(Photo by Bruce Glikas/WireImage)
By Rex Reed • 04/24/22 10:37pm

Rules unwritten but widely believed and rarely broken include the belief that some roles become so identified with the actors who originated them that they cannot be successfully performed by anyone else. This may be a narrow view that is challenged on a regular basis, but in a few cases the assumption firmly defies debate. I’m talking Marlon Brando as brutish Stanley Kowalski in A Streetcar Named Desire, Julie Harris as 12-year-old tomboy Frankie Addams in The Member of the Wedding, Judy Holliday as dumb-like-a-fox Billie Dawn in Born Yesterday, and, until last week, Barbra Streisand’s historic life-and-career transforming Fanny Brice in Funny Girl. Then I saw an actor with the unlikely name of Beanie Feldstein in the sparkling and explosively entertaining new Broadway production of Funny Girl and the one transformed is me.

Like the opening song in the score by Jule Styne and Bob Merrill says, “when a girl isn’t pretty like a Miss Atlantic City” she doesn’t always inspire the constant refrain of screaming applause you hear exploding nightly from the August Wilson Theatre like the eruption of Vesuvius. I’ve heard applause before, but not as loud or as often as the end of every song Beanie Feldstein sings in Funny Girl. Not, in other words, since Barbra Streisand launched the role in 1964 that led to more star-spangled fame, fortune and awards than anyone remembers. Move over, Barbra. Welcome, Beanie. A new star is born.

Like everyone else, I arrived at this refurbished classic dragging anxiety, trepidation and a show-me attitude with me, one eyebrow arched and wondering if this roly-poly newcomer was a misguided fool or the bravest kid in show business. I had no evidence of the kind of talent that deserved a starring role on Broadway. Her Minnie Fay in Bette Midler’s 2017 Broadway take on Hello, Dolly! did not impress, and despite the welcoming applause from a sold-out, standing room only crowd that admired her as Monica Lewinsky in the TV series Impeachment: American Crime Story, about the Bill Clinton scandal, I still wondered what the fuss was all about. She was nothing special to look at — hardly in the same league as Streisand. But just as the first whiff of cinnamon and clove fills the kitchen on Thanksgiving morning, she begins to sing “Who Are You Now?” and it is obvious something special is happening. One of several things accomplished by the newly revised book by Harvey Fierstein and the nimble direction of Michael Mayer in the shoes once filled by Garson Kanin is the shuffling around of the musical numbers. You don’t have to wait until the end of the first act for “People” or feel the thrill when your heart skips a beat on the passionate “Don’t Rain on My Parade”. They knock your socks off before the intermission. By that time, the star’s hidden magic hits you squarely in the heart in ways you didn’t see coming.

She’s not the reincarnation of Barbra, and, wisely, no pale imitation, either (close but no cigar). She can’t sing like Streisand, although her voice is beautiful and clarion-clear, and musically, it hits the top of the second balcony without even trying. I think it’s safe to say she lacks both the same comic timing and the coldly calculated genius. But she does have one thing her legendary predecessor in the role did not have—a sweet, warm truthfulness that makes her more accessible. She’s familiar, comfortable in her skin, like an old friend. You’re wary and cautious at first, but she grows on you, like a lichen. By the time the intermission seamlessly arrives, you’re in love.

The production recreates the heart and humor of the Ziegfeld Follies and the razzle-dazzle of Broadway in the 1920s in all of its rude comedy and gaudy glory. Mr. Fierstein adds an edge to the story without diminishing any of its values. New songs have been borrowed from the movie version and other sources, moved around in different acts and inserted for emphasis, and sometimes the whole thing moves too fast to digest. One minute Fanny is the awkward girl from Henry Street in Brooklyn, the next minute she’s auditioning for Ziegfeld, and before the applause wears down, she’s doing the pregnant bride bit that catapulted her to super-stardom, startling her mother (a sour Jane Lynch) and her poker-playing friends. On the rare occasion when the pace slows, there are luscious, leggy show girls to keep you enthralled, a swirl of spectacular tap dancers led by Jared Grimes to keep your pulse racing, and barrels of confetti that fall on your head like Technicolor rain. The show is three hours long, but Ms. Feldstein makes the minutes fly by with such pleasure that you wish it would never end. And she is bolstered every step of the way by the first completely drop-dead lover-husband version of gambler-racketeer Nick Arnstein in the history of Funny Girl. The dashing, glamorous Ramin Karimloo, so wonderful in Anastasia, is also the first Nick who can sing, dance and render an audience stricken with such awe that new numbers had to be added to enhance his role and showcase his varied talents appropriately. He makes Fanny’s fairy tale romanticism breathe with the realism that all things are possible. If this isn’t a star in the making, then justice no longer exists in the American theater.

It’s hard to describe what Beanie Feldstein does exactly. Words like “endearing” come to mind immediately, but there’s more. Working carefully to make Fanny Brice her own original creation, she is simply enchanting. 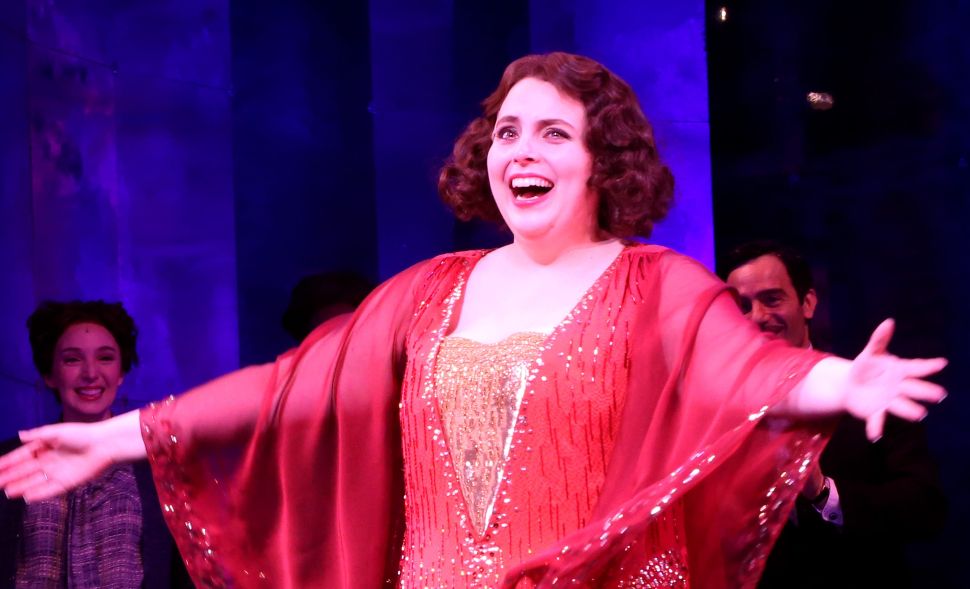