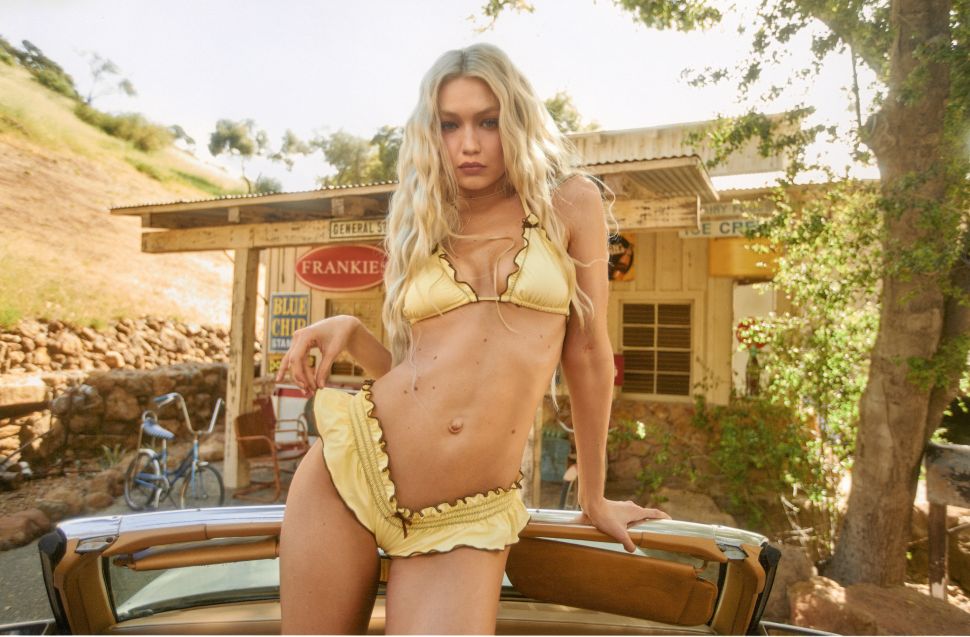 After a frigid winter filled with puffer coats, snow boots and endless layers, the best season of the year is finally just around the corner, which means it’s time to break out your summertime attire. No warm weather wardrobe is complete without breezy linen tops, chic white jeans and lightweight dresses, as well as many an adorable swimsuit, of course, which is why the new Frankies Bikinis latest supermodel-approved collab is coming at the perfect time. The celeb-adored swim brand is launching an exclusive, limited-edition collection with none other than Gigi Hadid, and you’re going to want to get your hands on the drop ASAP.

Hadid, who recently announced she’s working on launching her own clothing line, has known Frankies Bikinis founder and creative director Francesca Aiello since childhood; the two grew up together in Malibu. “We designed this collection with so much love, and I believe that really shines through in the details within the fabrics, prints and styles we chose to use. Both Frank and I have very social lives but also are big homebodies, and the collection really embodies that side of us,” Hadid said.

The 98-piece collection is composed of comfy and easygoing swim and loungewear, including bikinis and one-piece swimsuits, as well as bodysuits, camisoles, sweaters, leggings and dresses, plus a hat and scarf. The dreamy collab is inspired by Hadid’s summers spent at her family’s farm in Pennsylvania; she wanted to create pieces that she would comfortably wear while lounging around and relaxing by the pool.

The Americana-inspired collection is meant to evoke a wholesome nostalgia, with sweet and feminine patterns including a dainty toile, preppy gingham and soft florals, with plenty of delicate bows and ruffle details, all in muted shades of yellow, blue and red. There’s something for every type of summer shopper, whether you’re into the simple spaghetti-strap strawberry-print one-piece, a classic toile bikini, a cheeky catsuit or a whimsical cami.

For the launch, Hadid and Aiello stuck with a carefree Americana theme, with photos of the duo on a lake in a canoe, leaning on a vintage car and posing on a bike in front of a fittingly Frankies-branded general store. There are also subtle nods to Hadid and Aiello’s longtime friendship throughout the apparel designs, including a tree within the toile print that’s etched with “G+F.” Hadid added personal touches from her own life, including a deer and her fawn on the same toile print that is intended to symbolize the model’s own happiness with motherhood.

“Gigi is someone that is so special and so inspiring to me,” Aiello said. “She is creative, hard-working, kind and loving, and combining those incredible personality traits with our deep rooted friendship is what really made this collection not only fun to create together but also to shoot together.”

The collab, which ranges in price from $45 to $185, will be released in two drops at Frankies Bikinis; the first is a 56-style launch on May 11, followed by the remaining 42 items on June 2. Below, shop our favorite pieces from the Gigi x Frankies Bikinis collection.