In exactly two months, Feinstein’s/54 Below will round off its first full decade of operations. Closer at hand—like, Sunday, April 10th—it will mark a more impressive milestone: another Marilyn Maye birthday. Always an instant sellout, these events traditionally come with extra performances, added on both sides of the big day. This year, the lady will do nine extras—from April 6 to 12, or one show per decade. Incredible as it may seem, given the chutzpah on display, she’s turning 94.

Entitled “94, Of Course There’s More” this is her fifth birthday run—and 13th engagement—at Feinstein’s/54 Below.

Maye is hard-pressed to explain her longevity. It’s just an accepted fact of life for her. “I keep moving and keep singing, honey. Positivity has a lot to do with it. This is what I do. I can’t cook.”

The fans, she’s delighted and amazed to find, “just keep coming—these beautiful, loyal people who like what I do. I’m such an advocate of the personal relationship you develop with an audience. I don’t sing over their heads or to the balcony. I look them in the eye and sing to them. I connect with them. I don’t sing for them. I sing to them. It’s like we’re having a conversation.”

Preparing for her new act, she has been in “long-distance rehearsal”—i.e., on the phone with her musical director/pianist Tedd Firth. “Tedd and I just came up with a couple of April songs that I wanted to do. I had done the arrangement last night, just with my little keyboard, and then I called him this afternoon and I ran that by him. He will have it written by the time we open.”

Maye is a great one, like Barbara Cook, for acting a lyric, squeezing all the life and feeling out of what she is singing. No word is wasted on her. “You gotta live the lyric. You gotta think about what you’re saying, what you’re singing. You gotta entertain the audience. That’s your job.”

Great story songs that require acting are a particular forte for Maye, like Ballroom’s 11 o’clock number “Fifty Percent,” about a woman in love with a married man, or Follies’ “I’m Still Here,” about a showbiz survivor. “You become a different person. You become the person singing the song. One of those that everybody wants to hear is ‘Guess Who I Saw Today.’ That’s the woman who sat in the French café and discovered her husband with another woman. I’m always getting requests for it, and I say, ‘You know the ending.’ And they always say, ‘Yes, but we always gasp.’”

Maye’s ability to act a lyric inevitably led her to summer stock roles—two by Jerry Herman (Mame Dennis and Dolly Levi) and one by Cole Porter (Can-Can’s Pistache)—plus an assortment of Stephen Sondheim’s Follies girls (from Sally to the “I’m Still Here” survivor, Carlotta). Her Dolly experience led her to her recording “Marilyn Maye Sings All of Jerry Herman’s Hello, Dolly!” (meaning Dolly’s repertoire—and all the other songs in the show that Dolly doesn’t get to sing).

She confesses she has a favorite songwriter, her affection for the three above notwithstanding. “If I were to choose someone who writes a lot of songs that can really swing for me to do, songs that I can lend my jazz chops to, I would say Johnny Mercer. He really wrote lyrics that made sense to me. And he was in so many different genres as far as a lyric is concerned. He wrote gorgeous songs like ‘When the World Was Young’—that’s a heavy song—and ‘I Wanna Be Around (to Pick up the Pieces)’ and ‘One for My Baby’ and ‘Drinking Again.’ All that is a whole other ballgame. He wrote downers and uppers and dramas. He just told great stories.

“I was booked on an extended engagement in Savannah once, so I had time to go out to the cemetery to see where he was buried. There’s a concrete bench at his gravesite that Margaret Whiting donated. I just sat there on that bench and sang ‘Skylark’ acapella. I sang up to the heavens, and then, all of sudden, I heard applause from some other people in the cemetery.”

Like Marilyn Monroe, Marilyn Maye McLaughlin was named after Broadway musical star Marilyn Miller, one of Ziegfeld’s more glorified girls. Her mama was a stage mother and a pianist and started her daughter singing at the age of three. When she was nine, she won a singing contest in her hometown of Topeka. First prize was a 13-week, half-hour radio show. And she was off . . .

Chances are Maye might not have progressed beyond Kansas City had Steve Allen not caught her act at The Colony Club there and put her on national television. She did the show five times with him, and on the last show an executive with RCA saw her. That led to seven albums on RCA.

When she came to New York to record, she often played clubs around town. It was at a club called The Living Room that Ed McMahon spotted her and reported his find to Johnny Carson, who put her on The Tonight Show more times than any other singer (76 in all). Mike Douglas almost matched that with his show, and Maye guested her way through ‘60s and ‘70s television.

Vocal training has been a major part of Maye’s life, and, in recent years, she has reversed engines and gone to the head of the class to do master classes in the art of performance. Jon Batiste, who collected five Grammys this week, has sat through one of her master classes.

“Teaching has been good for me. It seems to have added a dimension to me. Actually, I think the best teacher is experience. The more I work, the more I learn, and the more I like to pass on to people who have the passion for singing. I have people who attend every single show that I do. Just got a message from a girl from Japan, who is here in this country to study with me. She said, ‘I have all my tickets to 54 Below. I’ll be there for all ten. I learn so much by just watching you.’”

Maye could write a book, and arguably should. “I always say, ‘Who would buy it?’” she dirt-kicks. “I’ve been asked, but it takes time, and I’m busy singing on stage now, doing live performances.”

Artie Butler and Phyllis Molinary’s “Here’s to Life” and James Taylor’s “Secret of Life” are the songs that give Maye the most pleasure to sing. “It’s such a great philosophy—living in the moment. It’s what I believe in, appreciating every single day of your life. I love closing shows with ‘Secret of Life,’ leaving the audience with ‘The secret of life is enjoying the passage of time. Any fool can do it, there ain’t nothing to it.’” And Marilyn Maye does it better than anybody. 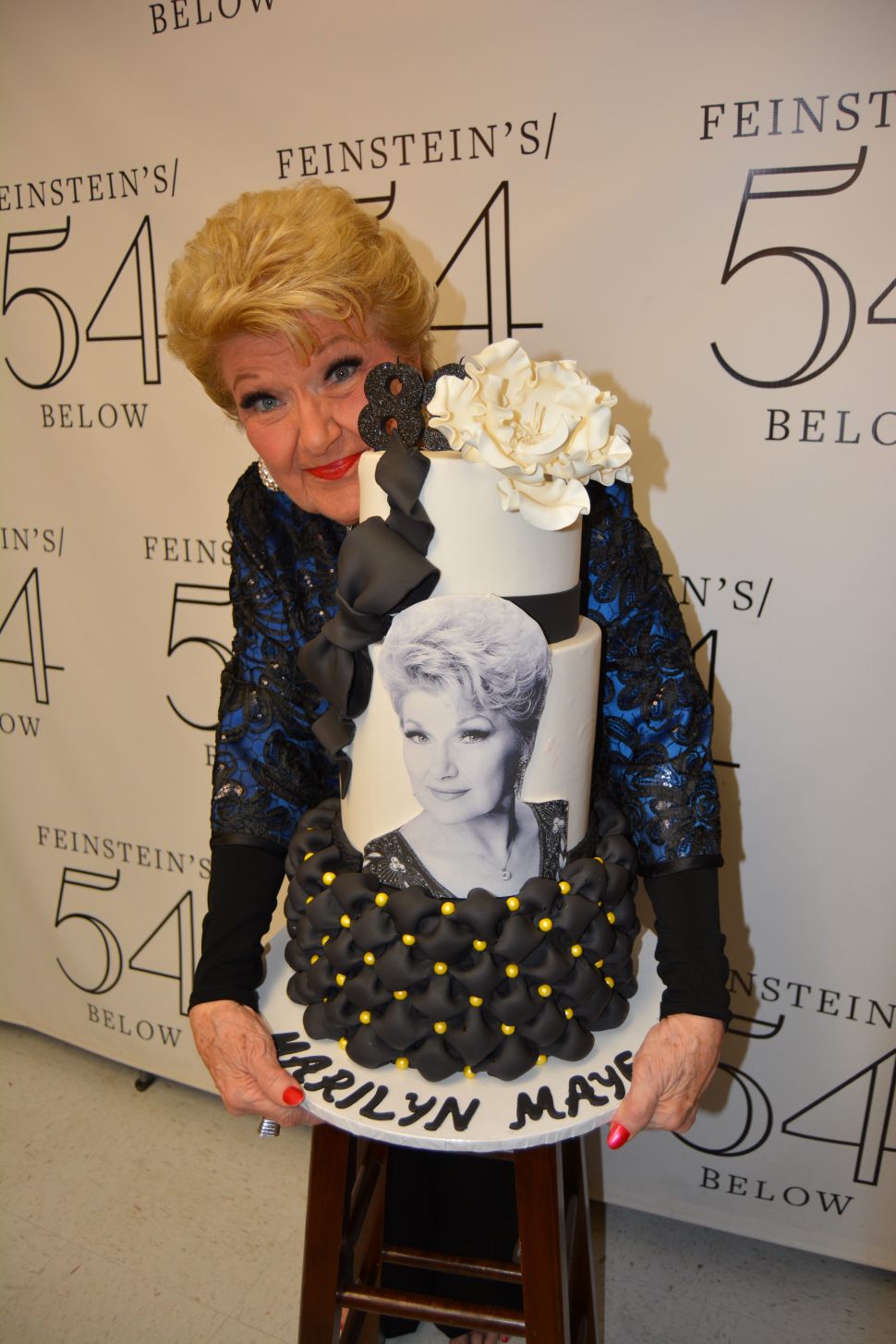 Filed Under: Music, Entertainment, Marilyn Maye, 54 Below, Feinstein's/54 Below