This season of Star Trek: Picard has taken a staggered approach to serialization, such that it feels as if the first or last ten or even twenty minutes of each episode could easily belong to its closest neighbor. As such, this week’s episode “Two Of One” feels aptly named: it wraps up the ongoing spy mission about two thirds into its 38-minute runtime and then shifts right into setting up what’s next. The pace feels a bit strange, but it’s hard to argue with the results, as just about every individual element of the episode delivers.

It begins with a cold open of Jean-Luc Picard lying on the pavement, bleeding onto his tuxedo as Rios and Tallinn (Orla Brady) hurry to his side. As he struggles in and out of consciousness, we get more brief memories of his mother in distress before the story jumps back to earlier in the evening, when the Admiral is arriving at the black tie Europa gala. We get a few teases like this throughout the episode, marked with relative timestamps, until the main timeline of the episode catches up about 30 minutes in. Showing us Picard on the brink of death is not, by itself, much of a threat, since the audience is unlikely to believe that Jean-Luc is going to die (again) on the series that bears his name. Instead, it’s a promise that the plan to infiltrate the pre-launch gala for NASA’s Europa Mission will not be going smoothly.

The recurring reminder of the disaster ahead is useful for two reasons: it gives “Two Of One” its own skeleton so that we don’t notice that it’s missing a first act. (We got it already, last week.) And it adds the threat of danger to a stretch of story in which the atmosphere is actually pretty relaxed. This is the first opportunity that the gang has had to slow things down and check in on each other, or for us to see the actors just live in their characters’ skin. The breather pays off in small moments, like Raffi and Rios’ chat by the bar, the first acknowledgment of their long friendship this season. Despite his recent arrest, Rios is becoming enamored with the 21st century, but Raffi can tell that it’s not just the “real” cigars and cuisine that’s got him excited. She cautions him against getting involved with the righteous Dr. Teresa Ramirez (Sol Rodriguez), as their relationship is already built on a lie. Rios, in turn, consoles the heartsick Raffi as she attempts to give Seven of Nine—who’s in a fully human body for the first time in her adult life—some space to enjoy herself. We get a reminder of Raffi’s struggles with alcohol addiction as she tries to keep her cool despite continued hallucinations of her lost ward Elnor. It’s a great use of some much needed quiet time halfway through the season.

Dr. Jurati’s got a companion of her own in this episode: the Borg Queen, whose consciousness has taken up residence as a “houseguest” in her body. Jurati is keeping the Queen’s presence a secret, seemingly by choice. While the Queen remains a voice in her head, Jurati is still in control of herself. That she withholds the truth from her shipmates anyway betrays that the Queen is at least partially right; Jurati does get a thrill out of their partnership and may not be in a hurry to lose it. The chemistry here between Alison Pill and Annie Wersching is terrific as the dynamic between them is played more and more overtly romantic, as if the Queen might even be a good influence on Jurati. But the Queen’s efforts to get Jurati to loosen up turn out to be entirely self-serving, as her stress hormones are impeding the Queen’s ability to take full control of the good doctor’s body.

Which brings us to the unlikely, totally implausible highlight of this episode, when Jurati distracts the gala’s security with an impromptu performance of Pat Benatar’s “Shadows of the Night.” It’s ridiculous for a number of reasons. Agnes happens to be off-book on a jazzy reinterpretation of a centuries-old rock song and the band just runs with it as if it was all rehearsed. How can anyone hear her over the horn section? Who’s operating that spotlight? The scene is explicable only by magic. It’s also exactly the kind of silly moment I was hoping to see in a black tie dress-up episode. Sure, it’s goofy as hell, but this is a story about a lady with a half-robot alien from an alternate future living in her head, so I’m willing to suspend disbelief in the name of fun. More importantly, I like that this apparent triumph for Jurati’s confidence is actually a win for the Borg Queen, turning the tables much in the way that Jurati did a few weeks back as she claims full control of her host body. The tug of war has been fun, but it was about time for the Queen to pull off a clean win and become a real threat to the mission and the planet. Overlooked by the rest of the crew as usual, “Agnes” is now walking free in Los Angeles with the likely intent of rebuilding the Borg Collective in the 21st century.

Meanwhile, Jean-Luc is able to arrange a private conversation with his Great (x10) Aunt Renée (Penelope Mitchell), who is about to quit the Europa Mission due to her mental health struggles. Posing as a wise old security guard, Jean-Luc encourages Renée to face her fear rather than succumb to it. Renée is a character who we, like Tallinn, have only viewed from a distance. We’ve been told of her brilliance, but we’ve witnessed only her struggles. When Jean-Luc talks to her, he shares his recollections of his mother, a character from whom we’re also steps removed. He feels that he failed to help his mother through her dark times, but he can still help Renée, offering fatherly advice and restoring her self-confidence enough that she decides to go through with the mission. One imagines that this will probably be Patrick Stewart and Penelope Mitchell’s only scene together, but the connection they establish in that short time feels real and familiar. It’s a strong bit of acting, aided by “actor’s director” and Star Trek legend Jonathan Frakes.

But, as we’ve been reminded at the start of each act, Jean-Luc is still in danger. Dr. Adam Soong (Brent Spiner) is also at the gala and, having failed to dispose of the two Picards earlier in the evening, decides to run them both down with his Tesla. Jean-Luc pushes Renée clear but is badly hurt himself, so the team (minus Queen Agnes) rushes the Admiral to Teresa Ramirez’s clinic to resuscitate his synthetic body. This marks Renée’s abrupt exit from the episode, but some hasty ADR confirms that the accident did not keep Renée from entering pre-flight quarantine. We certainly haven’t seen the last of her, nor of Teresa, who sees right through Rios’ thin excuses for these bizarre events. His inability to tell her the truth is damaging their trust, just as Raffi predicted.

Teresa isn’t the only person who’s becoming suspicious of someone close to her. After his botched assassination attempt, Dr. Soong returns home distraught and starts rambling to his daughter, Kore, carelessly dropping cryptic hints that she’s the result of some experiment. I can’t get a read on Brent Spiner’s performance in this scene; it’s unclear whether he’s having a mental breakdown or if he’s drunk. (A concerned Kore asks if he was driving, which seems to imply that at least she thinks he’s drunk. This may be surprising coming from a lifelong TNG fan, but I find Spiner to be very limited as an actor. I am not impressed with him here.) Isa Briones gets her point across, at least: Kore is scared, scared enough to sneak into her father’s lab and do some sleuthing. She finds video logs confirming that she’s the last of a long line of identical Soong daughters, all of whom died as children, except for her. For the third time on this series, Isa Briones plays a young woman who discovers that her past is a lie.

We wrap up back at the hospital, where Picard lies comatose. His brain is still firing on all cylinders, implying that his current condition is caused by a psychological issue rather than a physical one. Our point of view seems to confirm this, as we continue to see flashbacks of Jean-Luc’s mother. This time, however, we’re seeing some images of gothic horror mixed in with the family drama. Unless young Jean-Luc found Nosferatu in the basement of the Chateau, this implies that Picard’s childhood trauma is distorting into something even more terrifying. Tallinn volunteers to use her technology to dive into Picard’s mind and try to bring him back out, presumably setting up the plot of the next episode, in which the mental projection of Tallinn will have to help Picard face down the personification of his own damage. They haven’t known each other long and Picard’s interest in Tallinn is more or less transferred from Laris, but this would provide a serious shortcut to intimacy between these two characters. Wary as I am of the kicker of each Picard episode feeling less like a cliffhanger and more like the opening minutes of the next chapter, it is working on me—I am once again pre-sold on the story to come. 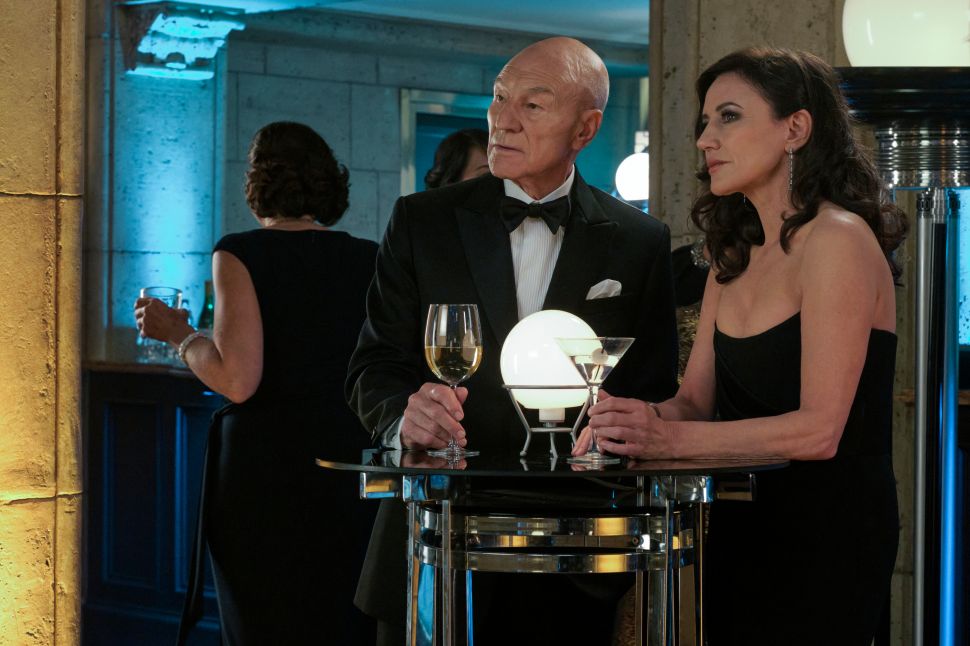