As we stagger to the end of the 2021-22 post-pandemic Broadway reboot, there are two best new musicals this season. Both are about Michael Jackson. Who are different people.

And yet: there’s overlap. Both stories poke and prod at Black male sexuality; they trace the lifelong scars that domineering parents leave; they dramatize the misfit in a label-crazy world; and they allow their heroes and audience to escape ugliness through art, which doesn’t make the pain go away, but clears space for ambiguity. By the end of MJ, we don’t know if Michael’s gay, asexual, or criminally messed up, but his music transports us across generations. With the achingly wistful final notes of A Strange Loop, our much-harassed hero, Usher (Jaquel Spivey) comes to the liberating thought that identity and change may only be an illusion.

That might sound like a spoiler, but A Strange Loop (gracefully staged by Stephen Brackett) is driven by anything but plot. It’s a musical fever dream, more an expressionist song cycle than a traditional book show. Usher gets his name from the fact that he is an usher at The Lion King. When not standing around a Disney-run lobby in a silly red uniform, tapping a tiny xylophone to signal end of intermission, Usher’s home on his computer, sweating over his “big, black and queer-ass American Broadway show.” Interrupting the writer’s focus are six bitchy Thoughts that pelt him with self-doubt, financial worry, sexual confusion and other cheery topics.

Our hero’s unfulfilling romantic life (think Company but with the worst sex in the world) lead him into self-loathing fantasies about a hunky white flirt on the subway, and sordid realities such as a hookup with a married guy in Inwood who mutters racist dirty talk and the n-word while plowing Usher on his bed. Usher fled a family and community in Detroit that probably would have driven him to unsafe sex or suicide (one song quietly memorializes “Black gay boys who chose to go on back to the Lord”). The scene in New York looks barely less provincial.

The putative narrative engine of A Strange Loop—Usher’s hired to ghost-write a “Tyler Perry-like gospel play”—is pure nonsense, an excuse to have satirical fun with Perry and other Black sacred cows (Rihanna, “Harriet Motherfucking Tubman,” side-eye at Slave Play). By the end, the gospel gig has merged into Usher’s shame at his homophobic, Popeyes-chicken-eating, drama-having family back home, who sing along to a terrifying   gospel number about how “AIDS is God’s punishment.”

A Strange Loop is profanely funny and courageously raw, but on a second viewing (I reviewed its world premiere Off Broadway in 2019), it’s also claustrophobically fixated on the wounds of youth, a howl of rage at gay lookism, white gatekeepers, and toxic Christianity. All those targets deserve to be howled down to hell. But Jackson is 41 years old; his avatar is identified as 26. That’s a telling gap, one that permits a rebel’s outrage rather than a middle-aged artist’s mellower view. The lack of self-awareness combined with merciless self-examination comes to a bathetic head when Thought #1 says, “[it’s not about] Tyler or your parents or anybody else. And as scary as this world might seem, all of this ugliness … this pain and anger … is about you. So how about you focus on yourself?” Which is rich after 90 minutes of Usher running screaming around his hall of mirrors.

In truth, the final two numbers are gentle heartbreakers. And, as the veils of fiction fall away, there’s room to doubt that the real Michael R. Jackson’s family is anything like the sitcom clan he portrays (he calls the show self-referential, not autobiographical). If the truth is too clean, an artist should throw paint on it. A descendent of works as diverse as Passing Strange, Falsettos, and [title of show], A Strange Loop announces the arrival of an audacious maker of Broadway musicals who’s willing to scrape his conscience and that of society. He clearly has a voice; I can’t wait to hear what other voices come out of it. 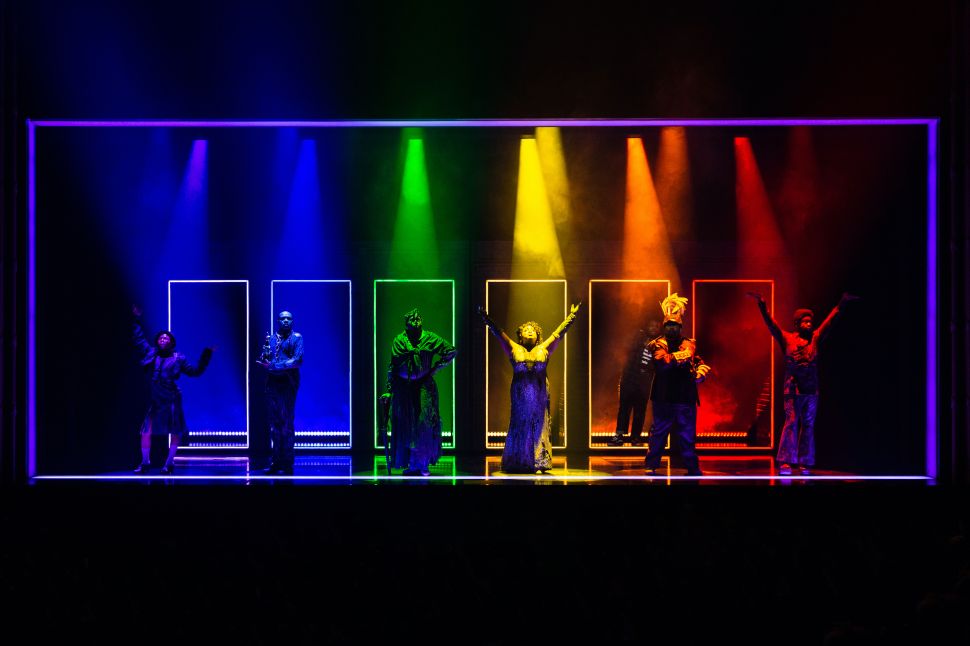